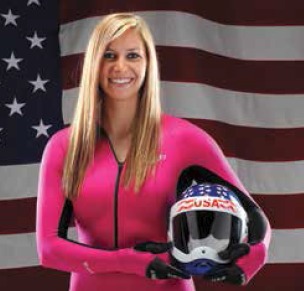 Before my first Olympic appearance, I was invited to attend an incredibly comprehensive social event known as the Media Summit. This national event attracts every newspaper, magazine, television broadcast, charity foundation, and webcast with any interest in sports, health, or fitness. Athletes expected to do well in the Olympics received invitations to attend, and we were asked to bring a variety of clothes to wear throughout the event. They wanted workout clothes, “Sunday best,” formal wear, competition gear and equipment, “going out” outfits, winter gear, and then basically anything else left in your closet after packing all of these items.

Near the end of the summit, my escort explained to me that one of the biggest photo shoots was just ahead. There would be photographers from Getty Images, NBC, Women’s Health, Shape Magazine, the Associated Press, and many others. Many photographers were asking the athletes to show off their bodies. They wanted to see the muscles and definition. They clapped and cheered as the athletes posed.

I was rushed into my final interview before this photo shoot, and as soon as I came out of the interview and into the massive studio room filled with lights, backdrops, and props, three women grabbed my suitcases out of my hands, opened them up, and sprawled my clothes out across a table. They were discussing what I should wear for each part of the shoot.

Another woman, Diane, grabbed my hand and rushed me off to what appeared to be a makeshift dressing room. Amidst the pandemonium of people running around, lights flashing, and people shouting, a black curtain hung from a pole to somewhat shield the person changing from everyone else’s view. As I stepped behind this curtain, the three women came running in with my clothes and told me what to wear and when to put each outfit on.

“One minute!” I heard someone yell. Diane told me that I would be changing many times in the next fifteen minutes and that I needed to do it as quickly as possible. I’m obviously competitive, so I saw this as a challenge. I quickly dressed and rushed out.

As soon as I exited I was told to sit in a chair and wave flags. “Two minutes to dress change!” Two minutes flew by as the cameras around me clicked away and suddenly I was back behind the curtain, changing into my winter coat and snow pants.

“Thirty seconds!” the same man yelled. I ran out of the dressing room and the setting had already changed. I was instructed to play in the snow shooting from a fake snow blower. “Two minutes!” he yelled once again. I played in the snow as the camera crew moved around me, taking photos and encouraging me to smile or pose with a “game face.”

The time ended and I ran back into the changing room. “One minute!” I quickly removed my winter gear and slipped into my Sunday best. The lighting had changed, and I was now doing portrait shots. All I really wanted right then was a mirror, because I knew my hair was a disaster from changing my clothes so many times. “Twenty seconds until wardrobe change!” The camera clicked a dozen more times, and I ran back behind the curtain.

When I entered, Diane handed me a dress. “Three minutes, people!” The dress she handed me wasn’t mine, and she could see my puzzled look.

“All of the female athletes are getting their pictures taken in a red dress to support healthy hearts and healthy living. This will be absolutely gorgeous on you.”

I took the dress from her hands and saw what was on the hanger. The dress had spaghetti straps on the shoulders, it was very revealing in the front, and I doubted the length would have even come near my fingertips. I knew immediately that I could not wear it.

But it was for a good cause, right? “Two minutes!” the man from behind the curtain yelled. I mean, healthy hearts, come on. It’s a good excuse to doll up! I’ve worked hard to get my body into this shape, and I want to show it off! Everyone is waiting for me. What am I going to say? I’d be the only athlete that didn’t wear it!

When it came down to it, though, wearing the dress or not was a very easy decision for me to make, because I had already chosen to stand as a witness of God “at all times and in all things, and in all places” (Mosiah 18:9).

I had decided a long time ago that I wouldn’t let the vision and expectations of the world determine who I am or what I stand for. What I wear is one symbol of who I am and how I feel about myself. I handed the dress back to Diane and told her, “I want to be modest. It’s just who I am, and I am sorry but I can’t wear this.” I expected her to roll her eyes and try to convince me to wear it, but she surprised me.

“Oh, sweetie, I’m a good Christian girl and completely understand and respect your beliefs. Let’s find you something else to wear.” I was shocked and elated by her understanding and support of my decision.

The experience reminded me of a quote from Thomas S. Monson: “As we go about living from day to day, it is almost inevitable that our faith will be challenged. We may at times find ourselves surrounded by others and yet standing in the minority or even standing alone concerning what is acceptable and what is not. Do we have the moral courage to stand firm for our beliefs, even if by so doing we must stand alone?”

He also stated, “You be the one to make a stand for right, even if you stand alone. Have the moral courage to be a light for others to follow. There is no friendship more valuable than your own clear conscience, your own moral cleanliness—and what a glorious feeling it is to know that you stand in your appointed place clean and with the confidence that you are worthy to do so.”

That brief moment in the dressing room had been a test of my beliefs. I felt validated realizing I had been able and willing to stand alone, and it gave me strength. It has since given me increased courage to  walk away from situations I did not feel comfortable in or change a conversation I did not feel was  appropriate. Find your courage, and dare to stand alone for what you believe in.

Diane dug deep in a box of clothes and found a dress that definitely wasn’t very flattering, but it was modest. I can still find pictures of myself wearing that dress on the internet, and I cringe at the style every time I see it. But it reminds me of something more. What I wear doesn’t define who I am. I know who I am and what I stand for regardless of what the world does or what people say or think around me. I don’t need or want attention from showing off my body. It is sacred to me.

Four years later I attended the same Media Summit, held in the same location. As I made my rounds through interviews and photo shoots, I came to a setting similar to the one I remembered. I entered a very large room with bright lights, shouting, and camera crews everywhere.

As I stepped in the door a woman took my hand and gave me a big hug. It was Diane. “I remember you! You’re that good Christian girl. We don’t have any immodest clothing for you to wear this time.” It brought a smile to my face not only because I had stood up for my beliefs but also because I had left a positive impression on someone else.

Read more about how Noelle Pikus-Pace stays true what what's important  in her new book, Focused.

The life lessons learned by Olympic athlete Noelle Pikus-Pace can equip each of us to turn daily choices and challenges into opportunities for growth. In her warm and relatable style, Noelle shares touching personal stories and teaches how these experiences can help us keep a healthy perspective on the things that matter most.

Covering topics from letting go of expectations to standing up for ourselves and for righteousness, world champion Noelle Pikus Pace infuses readers with the enthusiasm and confidence to get a little closer to their goals each and every day.