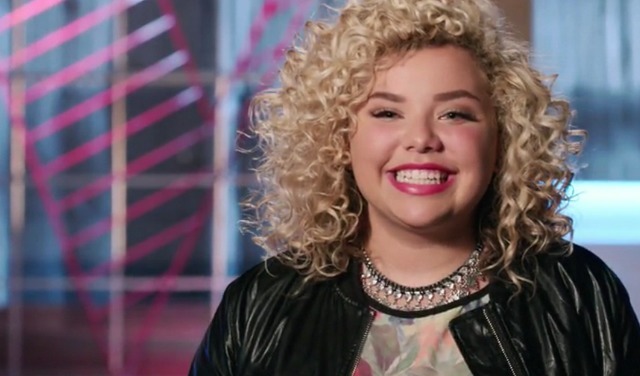 LDS 14-year-old Aaliyah Rose from Provo, Utah, made it to NBC’s The Voice  Monday and landed a spot with Gwen Stefani’s team after singing “Rise Up” by Andra Day for her blind audition.

It seemed as if it were meant to be, as Rose and Stefani both wore matching sparkly outfits that night. Stefani shares how much she wanted a “young, little pop girl” that she could work with on the show.

“Aaliyah Rose, that’s who I wanted to get today and I got her. She has an incredible voice and she’s 14 years old,” Stefani says.

OMG Aaliyah!! You are so cute, I could die! I can’t wait to work with you, you little ray of sunshine! ☀️ gx #VoiceBlinds — Gwen Stefani (@gwenstefani) March 7, 2017

Rose was ecstatic after joining Team Gwen because Stefani has been one of her artist idols.

“I’ve made it on Team Gwen and she’s one of my biggest inspirations so I’m really excited to work with her,” Rose says.

Growing up, Rose loved singing around the house with the fake microphone she got for Christmas. At 10 years old, she decided she wanted to share her musical talent with the world, so her parents set her up on her very own YouTube channel.

“Ever since I started singing, I just knew I wanted to sing for the rest of my life,” Rose says.

Rose’s first video instantly went viral reaching hundreds of thousands of views. Since realizing people loved to listen to her music, she continued to make many videos of covers of her favorite artists.

Her highest viewed music video, reaching close to 5 million views, is a cover she did of Meghan Trainor’s “Lips Are Movin” which Trainor herself posted on Twitter. Rose says she and Trainor have communicated back and forth since—and Trainor even sent a surprise video to wish Rose “good luck” on The Voice before her performance.

“Be yourself, and go get your dreams girl!” Trainor says in the video.

Rose says she decided to sing “Rise Up” because of the message she has for her family.

“This song is a way for me to tell my family that things are going to get better and that there’s always hope,” Rose says.