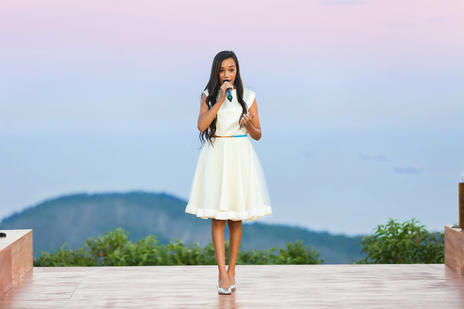 While performing in a national singing competition on TV, one teen stood out for wearing her Young Women medallion. When the costume designers asked her to remove it for the next performance, her response was touching and priceless.

On Saturday, July 30, LDS youth in Brazil participated in a special devotional in preparation for the world convening in their country for the XXXI Olympiad (see Church News Aug. 14 edition, pp. 6-7).

General Authority Seventies offered remarks and several youth performed musical selections. Among them was 14-year-old Nicole Luz, who was already a familiar face to many Brazilians.

Last February, the whole country of Brazil was introduced to the talented young singer when she impressed all four judges during the first season of the reality show “The Voice Kids,” a TV show that reveals musical talents from ages 9 to 15 and is broadcast on a national television network. Nicole, age 14, not only showed that she has an amazing voice but also that, as a young Latter-day Saint, she is willing to live and uphold her high standards and values.

Nicole, a Mia Maid from the Sobradinho 2nd Ward in the Brasília Brazil North Stake, drew attention after wearing her Young Women pendant during her performance.