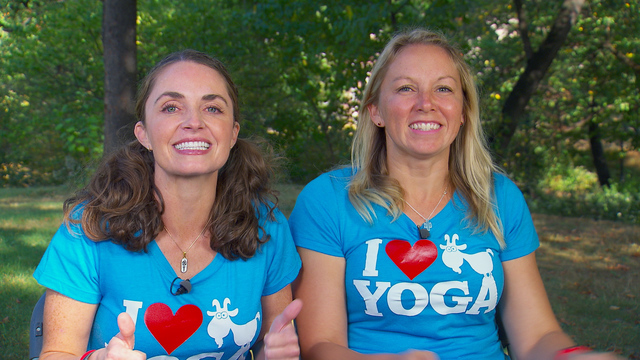 Before April Gould competed on The Amazing Race, she was warned that situations may come up where she would have to choose between her faith and a chance at the $1 million prize.

She just didn't know it would actually happen.

"I can’t give any spoilers, but there was a situation where we had to make a choice to do something that was against our standards," April shares. "And it was kind of hard. Because you’re faced with this and you’re on TV and it really puts your faith to the test. What are we going to do?"

The decision was compounded by the fact that it was April's dream to compete on the show. She had already planned out what she would spend the money on if she won.

"Pay [my] tithing, pay off the house, then put up a flying trapeze," April says. "I just love trapeze and I’ve always wanted to start a little circus for kids so that’s what I wanted to do.”

And this wasn't April's first time competing on national TV for a big payout. In 2015, she competed in the seventh season of American Ninja Warrior, taking the name of "goat whisperer." Why? Because, among her many pursuits, April also operates a goat yoga studio.

And yes, it's exactly what it sounds like. Goats and yoga.

But, as luck would have it, April and her business and The Amazing Race partner, Sarah Williams, would be competing while their hoofed comrades were pregnant.

"We just said we were going to put it on hold while our goats had their babies because they were getting too big to jump around anyway," April says. "We just said we’re taking a maternity leave."

While on the show, April and Sarah wore goat yoga t-shirts and even had an unexpected surprise when they picked up a magazine about yoga and found an entire article about their Gilbert, Arizona, studio.

"We were just flipping through and we were like, ‘Oh my gosh, there’s like a whole article on us,'" April says. "It had our website and pictures and it was pretty neat to see we were overseas without us really realizing it.”

To help her prepare, April says her husband taught her how to read a compass, how to tie knots, build a raft, anything that might come in handy for the show.

And to help them compete before each leg, April and Sarah would say a prayer to help keep them calm as they crammed in cars with cameras just a few inches from their faces and navigated foreign streets and countries.

"I can’t say I was calm the whole time," April says. "But it did help us with the challenges just to kind of relax a little bit. Every time we would think we were last or something I would just kind of calm down and be like, ‘We might not be last. Let’s just get through this challenge,’ and then we would get through it and realize we weren’t last. And that was really nice. People were helping us along the way."

To help herself stay focused, and to help her cope with not being able to contact her family during the show, April wore her Young Women necklace and a CTR ring to remind her of her family.

"I just wanted to keep a little piece of them because we had to carry all our stuff in a backpack everywhere we went so I didn’t have a lot of room to put any weight in there, so I kept on my CTR ring and my Young Women medallion to remind me of my kids and why I’m doing this," she says.

And April's reason for competing was to show her kids they could do hard things and accomplish their goals. She just didn't know how hard the competition would be until she was asked questions about her faith before the show.

"They actually asked us questions about our religion and about the Word of Wisdom. And they were saying, ‘I know you can’t drink, so would you drink?’ And we were like, ‘No.’ and they were like, ‘What if it was the very last challenge. A million dollars, would you?’ And we were like, ‘No.’ . . . We actually were faced with a challenge where we had to make a decision kind of like that. . . . But there were times where we had to choose to do things that were against our standards and we chose not to."

But despite the pressure of choosing to live her faith on national TV, the stress of navigating through foreign countries, and completing difficult challenges, April says she would do it all over again if she could.

“It was such an incredible experience. I grew so much from it. I learned so much. I would do it in a heartbeat if they asked me to do it again. . . . It’s definitely worth watching.”

Watch CBS's The Amazing Race on Jan. 3 at 8/7 CST to follow April and Sarah's journey on the show and how they showed their faith.