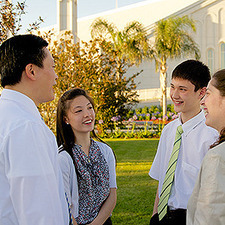 The Church had a busy week as they released a new temple policy, an FHE Lesson, and the next temple groundbreaking.

The new temple policy sets aside specific times that families can come and do temple work together without having scheduling conflicts with other groups.

The Church also released a new FHE lesson on Sexual Intimacy, designed to help give children healthier and correct view on what sexual intimacy is and isn't. "Whatever your hesitations or fears, it is vital that you discuss sexual intimacy with your children on an ongoing basis," the lesson begins.

"Children and teenagers are regularly bombarded with damaging ideas about sex, and you have the opportunity to help them create a positive, gospel-driven understanding of sexual intimacy. As you study these resources, counsel with the Lord to determine the approach that will allow you to have a meaningful discussion about sex with your children."

Star Valley, Wyoming will be home to a new temple. The Church announced its plans for having the groundbreaking ceremony soon.

-->Go here for more updates regarding the ceremony

Elders Zuniga Delgado and Michael Whitaker met with a potential investigator in his home last week, where the man refused to let the two missionaries leave, using physical force to keep them in the residence.

-->See how the elders escaped

Jensen Parrish was serving in Vancouver, Washington when she received the heartbreaking news: almost all her family had died in a carbon monoxide poisioning accident. Only she and her brother, Ian--also on a mission--were left.

"Not long after that, I was speaking to a very close friend of mine who also lost her mother unexpectedly five months before. As we were discussing our feelings, life, and what we were going to do, she told me, 'I’m just trying to figure out my new normal,'" Jensen Parrish recalls.

"The phrase really struck me. The life that I knew before was gone; it was never going to be the same. But my life would somehow adapt to the sudden changes, and it would one day become 'normal' again. It would be different, it would be new, and it would eventually become a new normal."

-->Read more of Jensen's journey to a new normal

On a balmy February afternoon in the poverty-stricken country of Haiti, Timothy Ballard is thrown to the ground and handcuffed by local law enforcement. Lifting his head from the asphalt, he watches as the woman who just sold him two young children—a brother and sister ages 2 and 3—for $15,000 apiece is hauled away by police.

Ballard describes himself as a modern-day abolitionist and is doing everything in his power to educate the public about the little-acknowledged plague of human trafficking in society.

“We go about our lives thinking we have eradicated slavery, but it’s bigger than ever,” he says. “There are more slaves today than all the slaves in 300 years of the transatlantic slave trade.” In fact, human rights organizations agree there are at least 21 million victims of human trafficking in the world today, including 2 million children. Rescuing these children has become Ballard’s mission in life—a mission he believes is inspired of the Lord.

"Most people, including members of The Church of Jesus Christ of Latter-day Saints, don’t anticipate having to visit their spouses behind bars. It’s just a foreign concept for us. Unfortunately, we are all human, and we all make mistakes. And, as one woman said, some people’s mistakes are bigger and more visible than others.

"My friend who said this has firsthand experience with high-profile errors, because her husband is serving time in federal prison on a case that was well-publicized in their former community. He is appealing his conviction," the article explains. "The husband of another friend of mine is also incarcerated, and his case is winding through the legal system.

"I am a second-hand observer to their situations, and I don’t pretend to know how they feel. But I can imagine that the road is lonely and a little scary. My purpose in writing this is to help others who might be in a similar situation see that there is light at the end of the tunnel, and they are not alone."

-->Discover how you can help those who have family members incarcerated

Google Cracks down on Immorality

Google released a new app for YouTube with kids in mind. The app has clean content, and you no longer have to worry about questionable "related videos."

Features on the app include a timer to limit screen time, search settings that let you limit the results to only videos you've approved, and even adjustable sound settings to keep the noise down during quiet times.

Even the app's overall design has kids in mind: larger images, bold colors, and intuitive features help kids navigate the screens. (You can even enable a voice search if your little one has trouble with spelling or typing.)

YouTube Kids is available for free on Android and iOS devices.

In addition to their newest app, Google also is also changing its policies on its popular blogging site, Blogger.

"Starting March 23, 2015," the new policy states, "you won't be able to publicly share images and video that are sexually explicit or show graphic nudity on Blogger."

What exactly does that mean?

All blogs with sexually explicit or graphic content that are hosted by Google on Blogger will be changed from public to private. These private blogs can only be seen by the owner, admins on the blog, or people the owner of the blog has specifically shared the blog with, which makes the pornographic material contained in these posts much more difficult to access and share.

-->Additional information can be found here regarding the new changes