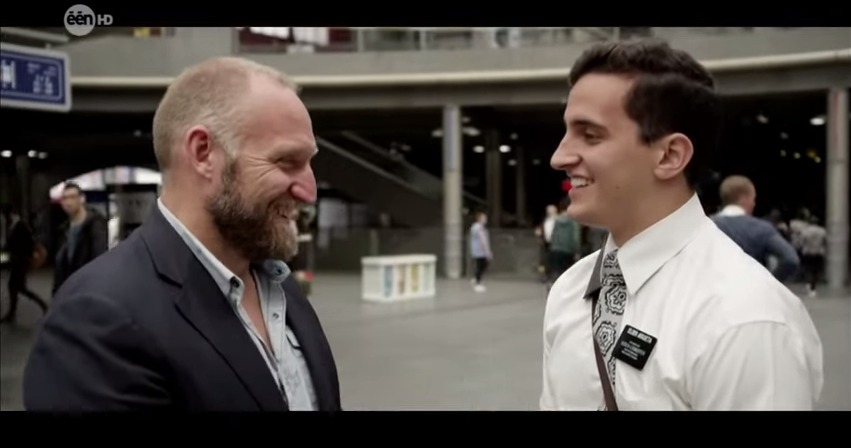 In a new Flemish TV show entitled Ja Jan, a TV host commits to say "yes" to every question asked of him for 60 days.

Including when he ran into two Mormon missionaries.

Episode 4 of the show, which aired on January 26th, follows Jan as he flips a coin leaving his house to determine the direction he'll walk that day. As luck would have it, he drops the coin, which then rolls to a stop on tails--directing him to walk forward instead of to the right.

As he walks, who should he find but a pair of American missionaries in a nearby square?

-->Read more about Jan's adventure with the missionaries here.

Holding a disciplinary council for a member of the Church is not something that any local leader takes lightly. Such councils are always held in private, and the member is always invited to be a part of that discussion. The decision as to whether to hold a disciplinary council, when and for what reasons rests with the local leader who knows the individual best. Local leaders operate under general principles and guidelines of the Church.

Love Lessons from the Apostles and How One Question Saved My Marriage.

Just in time for Valentine's Day, read these heartening stories from the Apostles and learn how Richard Paul Evans saved his marriage with just one question.

From the Apostles: Because Latter-day Saints believe marriage is an essential step to exaltation, we strive to create marriages that strengthen and uplift us every moment, not only here but through eternity, something that’s much easier said than done. As with all things worthwhile, marriage and love are hard, stressful, and take lots of work. But, they are entirely worth investing in.

From Richard Paul Evans: My oldest daughter, Jenna, recently said to me, “My greatest fear as a child was that you and mom would get divorced. Then, when I was twelve, I decided that you fought so much that maybe it would be better if you did.” Then she added with a smile. “I’m glad you guys figured things out.”

-->Discover the question you might want to start asking

Elder Oaks Answers: Can I be Happy if I'm Ugly?

An anonymous letter with only a post office box address was delivered to Elder Oaks. The letter expressed a concern so decisively that he felt to share both it and his reply with me. They state very well the struggle with self-worth so many of us feel in this life.

In 1973, Kim Roberts was serving as a full-time missionary for The Church of Jesus Christ of Latter-day Saints in the Texas North Mission. Because the mission had enjoyed an influx of newer missionaries, then-Elder Roberts and his companion were asked to travel the mission and provide some hands-on training. Six months before the end of Roberts' mission, their travels took them to Denison, a small city 75 miles north of Dallas.

Roberts remembers one afternoon, while working alongside the missionaries assigned to Denison, noticing something unusual about the red bricks in the sidewalk near the house they temporarily called home. Some of the standard-sized bricks were stamped with the words, “Don’t Spit on Sidewalk.”

-->Find out what then-Elder Robert's did next, and what happened after.