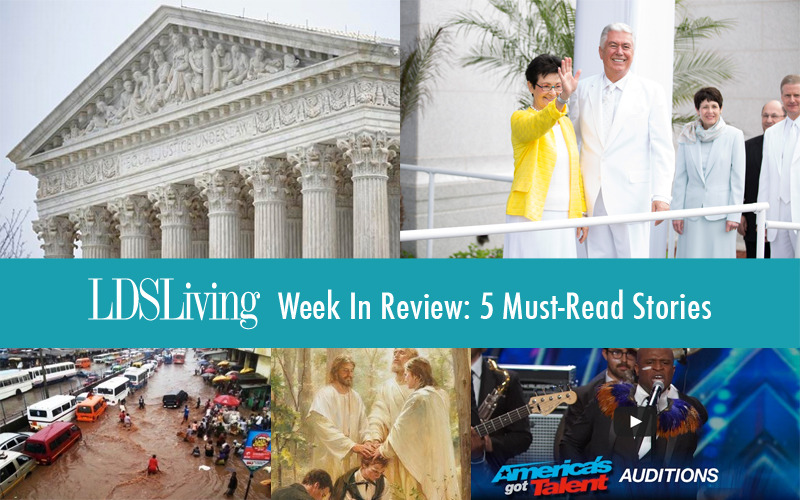 In a 5-4 decision that was publicized Friday morning, the Supreme Court of the United States of America made its decision in favor of same-sex marriage. This ruling will effectively make same-sex marriage legal throughout the country.

Justice Anthony Kennedy wrote the majority opinion, which used the 14th Amendment (which addresses citizenship rights and equal protection under the law) as a basis for the ruling.

The Church of Jesus Christ of Latter-day Saints’ second temple in Peru, the Trujillo Peru Temple, was dedicated on Sunday, June 21, 2015. President Dieter F. Uchtdorf, second counselor in the Church’s First Presidency, presided over the services and gave the dedicatory prayer.

Joining him were Elder David A. Bednar of the Quorum of the Twelve Apostles and Elder Michael John U. Teh of the Seventy and a representative of the Church Temple Department.

-->To see beautiful pictures of the temple and ceremony, click here!

Howie Mandel Raves About Alex Boye on 'America's Got Talent'

Last week, in a teaser for the latest episode of America's Got Talent, popular LDS Youtuber and singer Alex Boye noted, "[Our] performance was so hot, it actually sent me to the hospital."

As Boye and his band, Changing Lanes Experience, walked onto the stages, the judges reacted with curiosity. A brief exchange revealed that Boye is originally from England, now living in Salt Lake City, and he makes "online music" for a living. Sharing his reason for being on the show, he explained, "My dream is to absolutely slay it with these incredible people, win our own Vegas show, and everyone coming to see us every single day, every single week, and we put a smile on their faces."

Boye and his band sang an Africanized version of Taylor Swift's popular song "Shake It Off" with lots of fun dance moves thrown in by Boye and every member of his accompanying band.

What I am about to share with you is the most life-changing event that I have ever experienced. It  started on a regular Wednesday evening around 6pm.  We were out proselyting in Accra, Ghana when it suddenly began to rain. We helped as many people as we could until the storm forced us inside at about 7:30pm.  Around 9pm I checked on the gutter right outside of our apartment only to discover that it was a raging rapid completely overtaking the curb and street.  I couldn’t believe it!  Huge chunks of debris were quickly flowing by our door as they made their way down the street. A few minutes later we received a call from our Bishop asking us to please go and check on his family since he couldn’t get to them.

-->Read the rest of this incredible story here!

Recently, the Church has published a series of essays on sensitive Church issues. Those essays are now being included in the seminary and institute manuals.

Thanks to LDS.net for pointing out this interesting news!

Some time ago I blogged about a new seminary manual on the Doctrine and Covenants released by the Church. The manual is significant because it includes discussions of sensitive topics related to Church history, such as the multiple accounts of the First Vision, the Mountain Meadows Massacre and the Utah War, the history of plural marriage, and the history of the priesthood ban. It appears that by including these topics the Church is taking steps towards more transparency when it comes to its history and "inoculating" its young members who are likely to encounter antagonistic websites that can easily blindside them with these issues if they aren't prepared.

-->Read more about the changes here!