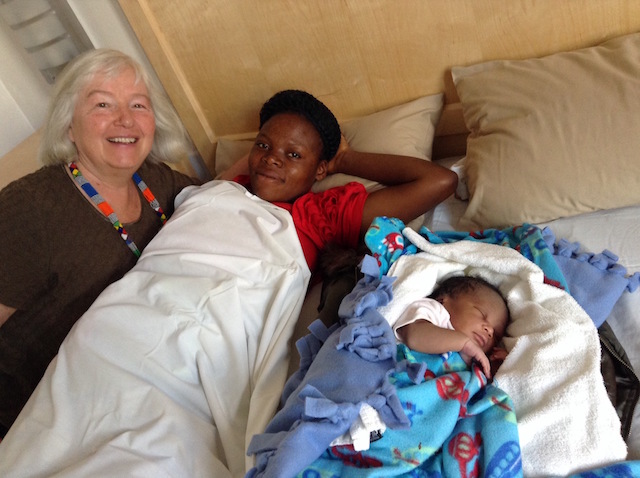 It's fairly rare to hear about babies born near or at LDS temples, but it's even more unusual to find yourself an active part in these deliveries.

But Sister Roberta Clayton has found herself assisting with two such births—one in the Nuku’alofa Tonga Temple non-patron waiting area and another at the Johannesburg South Africa Temple patron housing.

Her first delivery was at the Nuku’alofa Tonga Temple where she was serving as a temple worker. After an expectant mother was found doubled over outside a temple session room, Sister Clayton was called over to assist with the delivery.

The mother was moved into the temple non-patron waiting area, where Sister Clayton assisted with the delivery until Sister Frederika ten Hoopen arrived to help with the rest of the birth.

The baby was later named Teni Keleitoni Temipale Latu, which means ten Hoopen and Clayton plus temple in Tongan.

Though it was an unusual place to help deliver a baby, it wasn't the last time Sister Clayton would help with a birth on temple grounds.

Five years later, while serving as an audit couple in Southeast Africa, Sister Clayton and her husband were at the Johannesburg temple when she was informed by those in charge of patron housing that a woman from the Democratic Republic of the Congo had just given birth at the patron housing.

"I was thrilled because for me this is a great opportunity to be a part of any birth," she says. "Also, I was excited because I knew it was a follow-on to the experience we had in Tonga." 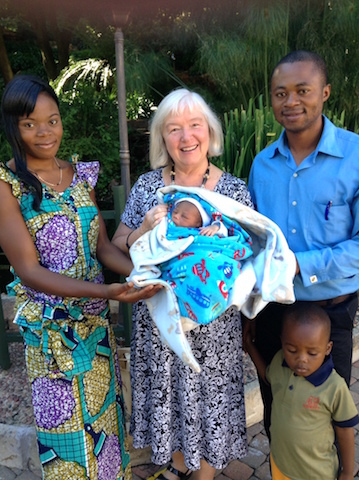 Sister Clayton with the family she assisted in the Johannesburg temple patron housing birth.

Sister Clayton, who served her mission in France and speaks French, was able to translate for the doctors and helped the mother shower and get dressed before she rested in bed with her newborn. It was an especially sweet moment, as Sister Clayton had helped this mother just two days before as she received her endowments with her husband before both were sealed in the temple.

While it is unusual to assist with two deliveries on temple grounds, Sister Clayton says she felt prepared long before she helped with either.

"I feel like my experience as a mother and a grandmother prepared me to help them both," she says. "I have eight children of my own and I was a very active participant in all those births. And my three daughters plus three of my daughters-in-law have also made me welcome at many of the births of our grandchildren and I just attended one on Monday in North Carolina. I'm not mostly actively involved, but I love to be there and feel that sacred moment and hear that little cry when the baby is born."