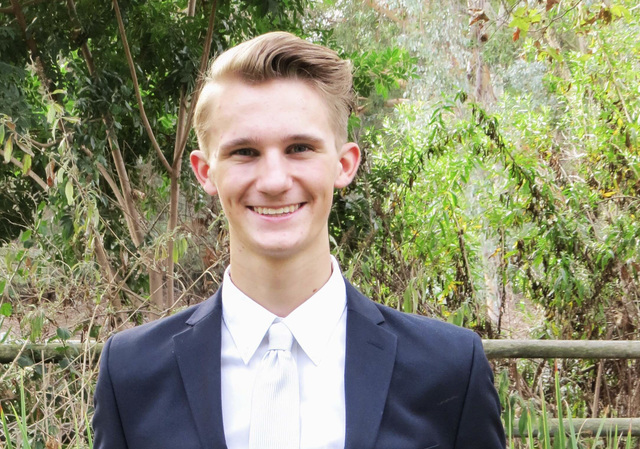 LDS Teen Shares Testimony in Unique Way That Gained Him Over 1,000 Followers on Instagram

Every week, high school junior Carson Ripley inspires over 1,000 followers on Instagram with a new video of his original arrangement of hymns.

“I knew that I wanted to find a way to use my gift of music in a way that God would want me to for a while before the idea to start @weekly.hymn.dose came,” Ripley said.

I'll Go Where You Want Me to Go: 'O ye that embark on the service of God, see that ye serve him with all your heart, might, mind and strength, that ye may stand blameless before God at the last day. Therefore, if ye have desires to serve God ye are called to the work' D&C 4:2-3 Big thanks to @faithywoolley for helping me with her amazing gift from God with this song. Couldn't have done it without her #HisDay #illgowhereyouwantmetogo #hymn #efy #efy2016santabarbara1

Like many of us when seeking answers to important questions, Ripley struggled for a time not knowing how he should share his talent and testimony. He even attended firesides and a conference about how to share positively on social media, but still, nothing came like he was hoping.

“I kept praying for inspiration, and then one night, while getting ready for bed, it all made sense what I needed to do. I needed to create an Instagram to share different arrangements of hymns,” Ripley said. “It was incredible. One second I was in the dark, and just like a light bulb going off, the next I knew where I was and where I needed to go. It was something I knew I had to do, no matter what.”

The Lord is My Light: 'Behold, God is my salvation; I will trust, and not be afraid: for the Lord JEHOVAH is my strength and my song; he also is become my salvation' Isaiah 12:2 #TheLordIsMyLight #Hymn #ShareGoodness

Ripley said the response he’s received to creating the account has surprised and humbled him.

“People have told me things as simple as a certain song making their day a little better. I've also had several others say that they look forward to my songs each week,” Ripley said. “All the response I've gotten really means a ton to me. Music changing people in big or small ways is all a musician can really ask for. Music is just so powerful; it can lift people’s spirits and encourage them to be better.”

Family has been Ripley’s greatest support throughout his endeavor to bless lives through music. He said they are always encouraging him and willing to help film the videos. Some of his videos may even feature his younger brother, cousins, and other young promising musicians he knows.

More than simply a way to share his music with the world, Ripley believes his Instagram is a way for others to find “solace and feel God’s love” and to “bring more of the Spirit to Instagram.” He has created his Instagram “so people can find a light amidst the often darkness that can be found there.”

Sometimes funny moments happen when shooting a video for Instagram. While Ripley was spending time traveling with his grandparents last summer in Pompeii, Italy, he was trying to find a place that would make a quality video.

“Eventually my grandparents and I found a quiet place, where nobody was in, at the moment. We quickly headed inside, and after five or so takes, a crowd of tourists had gathered at the door clapping as I finished. Maybe clapping for my voice, but probably just because I was done in the room and they could finally come in,” Ripley said.

Love At Home: 'And ye will not suffer your children that they go hungry, or naked; neither will ye suffer that they transgress the laws of God, and fight and quarrel one with another, and serve the devil, who is the master of sin, or who is the evil spirit which hath been spoken of by our fathers, he being an enemy to all righteousness. But ye will teach them to walk in the ways of truth and soberness; ye will teach them to love one another, and to serve one another.' Mosiah 4:14-15 #HisDay #LoveAtHome #Hymn #ShareGoodness #Motivational

Ripley knows that God will provide a way for him to post, even when it looks like there is no way. He shared an experience where he trusted that God would take care of his needs, even if it was just to share an Instagram post:

“I was in Lake Powell one summer early into the Instagram's life, and we happened to be staying there over a Sunday. I knew that I needed to make sure that I posted that week's hymn, but there was no service where we were camped out. Everyone I talked to told me to just post it later, but I refused to heed their advice. I knew that if I missed one week, I'd miss other weeks, and the Instagram wouldn't be what God needed it to be. So although nothing seemed to be working right, I spent hours with my Uncle working out how exactly we could get the service we needed and get it to post. After trying and trying again, even when I wanted to almost give up, my Uncle wouldn't let me. And eventually it went through and posted. It honestly helped confirm to me the truth of what it says in 1 Nephi 3:7, 'that the Lord giveth no commandments unto the children of me, save he shall prepare a way for them that they may accomplish the thing which he commandeth them.'"

For the Beauty of the Earth: We should always be grateful of the beauty around us, even the little things 'O come, let us sing unto the Lord: let us make a joyful noise to the rock of our salvation. Let us come before his presence with thanksgiving, and make a joyful noise unto him with psalms. For the Lord is a great God, and a great King above all gods. In his hand are the deep places of the earth: the strength of the hills is his also. The sea is his, and he made it: and his hands formed the dry land. O come, let us worship and bow down: let us kneel before the Lord our maker.' Psalms 95:1-6

Ripley has been singing since he was a child and began performing when he was about eight years old. He has been writing songs for about five years now and is studying commercial music at the Orange County School of Arts in Santa Ana, California.

"This is a song I wrote about an experience I had earlier this year, where a lot of my friends were hurt by somebody who was trying to share their beliefs in a hateful way. I was really unhappy with that whole experience, and I figured my best way to cope with it was to write the negative experience into a positive song. I eventually wrote and then recorded it. It's called 'Worthy.'"

This journey for Ripley has opened his eyes to the influence positive music can have and has helped him have gratitude for his God-given talents.

“Through each song and each arrangement, I've learned how powerful and impactful music is on our lives,” Ripley said. “Each week I've learned to grow closer to Christ and our Father in Heaven through praising His name through music.”

Mormon Life Music InstagramMusic,Instagram,Mormon Life
Comments and feedback can be sent to feedback@ldsliving.com