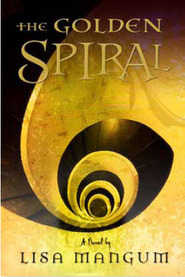 This year, ForeWord Reviews awarded the Gold honor to the book The Golden Spiral, written by LDS author Lisa Mangum.

The Book of the Year awards, given by ForeWord Reviews, honors books in 60 categories for the Gold, Silver and Bronze awards to call attention to librarians and booksellers who may have otherwise overlooked these books.

The Golden Spiral, the second book in The Hourglass Door trilogy, is a clean, time-traveling romance novel about a senior in high school who falls in love with a man from a different time period.

“I had high hopes for winning because The Hourglass Door won the gold for 2009, and I thought it would be amazing to win in back-to-back years,” Mangum said.

When they came to the young adult fiction category, the cover of the winning book was flashed on the screen. As soon as she saw the black and gold cover, Mangum gasped and started to cry, not really remembering them say her name before moving on to the next category.

Mangum has always wanted to be a writer, and with a mother who also wrote, she grew up exposed to many books. Around five ago, Mangum and some friends started a writing group, and that is when she got serious about writing novels. It was after a group meeting that the idea came to her.

“I was driving one day, thinking about YA novels, and it was like Abby and Dante jumped into my car with me, and just like that—I had this idea,” Mangum said. “I’ve never had an idea hit me with that much force before and it was all I could do to write everything down fast enough.”

Within 30 minutes, she had the entire trilogy outlined—complete with character names and development arcs, pacing and plot and some snippets of dialogue. It was almost two years to the day from when she came up with the idea that the finished book was available for purchase in stores.

“It’s nice to have that feather in her cap—to be able to tout that it is no longer subjective: this is an award winning series,” said Chris Schoebinger, product director and creative director at Deseret Book and Shadow Mountain Imprints, which published the series.

Romance novels are a top pick among teens, and they are often laced with sexual promiscuity and immoral scenes. Because of that, he loves to tell librarians that this is a clean, romance novel, and he said librarians usually light up when they hear that.

“I think the writing is not only good, but it is sophisticated. It makes you think and it engages you from the very first page,” Schoebinger said.

The comment Mangum hears the most from readers is that they couldn’t put the book down, and the reader in her understands what it is like not being able to set a book down. She said she is honored that her books could be those kinds of books for someone else.

Another frequent comment she never expected to hear from readers is that after reading her books, they are inspired to write their own stories.

“I believe that everyone has a story to tell, and [that] I can be a part—even a small part—of that great circle of life and literature and inspiration is exciting.”

*To learn more about The Golden Spiral, click here.