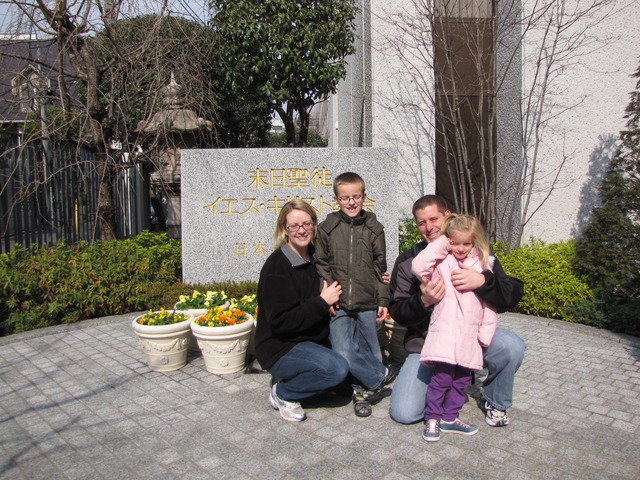 LDS family shares story of being stranded in Tokyo after earthquake

As their children said prayers, Melissa and John Petrini carried Benjamin (7) and Isabella (5) through the crowded streets of Tokyo only moments after the 8.9 earthquake experienced on March 11. As a dentist for the United States Navy, John and his family had been deployed to Okinawa, Japan. Each year, the Petrinis and four other LDS families on deployment visit Tokyo for a week-long temple trip and site seeing tour.

On the day of the quake, the Petrini’s opted out of visiting Disney Tokyo with the rest of the group in order to tour a local park. As Melissa and her children entered a paddle boat, the quake hit.

“Our boat rocked back and forth crashing into the boating dock, and my husband, who was still on the dock, fell to his knees because he could no longer stand,” Melissa said. “We watched in amazement as the large trees lining the pond were shaking violently back and forth to the point where they seemed to bend almost sideways. . . . The violent shaking continued about a couple minutes or so. The boat attendant quickly gestured us off the boat and away from the pier and gave us our money back. As we walked away, we could still feel the earth shaking.”

Initially, the Petrinis did not realize how serious the quake was because most of the shock was absorbed by the water while they were in the boat. “The Japanese were calm and quiet as we walked through the streets. They were laughing and joking, so we assumed that it was a normal event,” Melissa said.  However, when the Petrinis failed to get a cab to go back to their hotel, and saw the amount of traffic and pedestrians that lined the streets, they began to feel overwhelmed.

At that point, John pulled out his cell phone and discovered the magnitude of the quake. The Petrinis sat their children down and explained to them that they would have to walk 10 miles through the unfamiliar Tokyo streets. The walk would take them several hours to complete in the 35-degree weather with two small children in tow; not to mention, the cell phone that showed them the directions was low on battery.

“We told the kids to say a prayer. I have junior arthritis and I can’t walk very far, so I was saying a prayer in my heart that we would find a cab and that the battery would work.” Earlier that day, the Petrinis visited the temple grounds and that peace accompanied them on their journey.

They tried to keep a laidback approach in light of the situation. As they walked, they laughed and talked calmly. Melissa said that “This was like a huge bonding experience to pull together. . . We even made jokes that the best way to see Tokyo is to go on a 10-mile walking tour.”

When they got about two miles from their hotel and recognized their surroundings, the cell phone’s battery died. Melissa turned to her husband and said, “That was a blessing that was just answered.” Thankfully, the other half of the Petrinis temple group was all accounted for by the next morning, although these families met their own set of hardships as well on their journey back to the hotel.

The families had flights back to Okinawa for the next day that had been canceled. But, as soon as they made it back to the base, many of the families were deployed to Tokyo for three months to help with the cleanup efforts. At the U.S. naval base in Okinawa, several drop-off points for blankets and toiletries have been created and the Petrinis hope to help with these efforts.

Melissa is grateful that her family and friends made it safely back to the base, but she believes that their safe return was facilitated through the Spirit. When Melissa reflected on the experience, she said, “It was a spiritual experience where prayers were answered in small ways.”