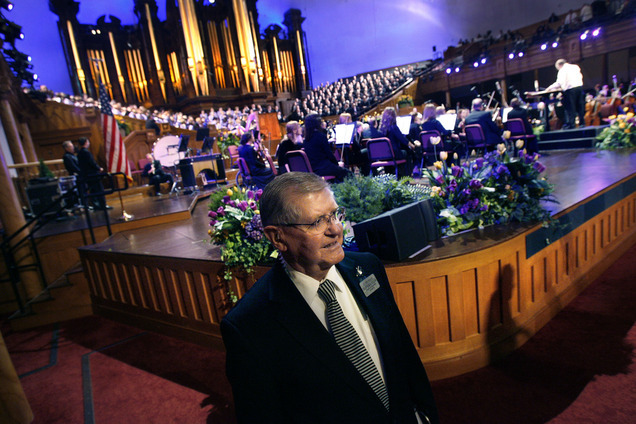 Glenn and Carol Baugh have been directing Mormons to their seats in the giant Conference Center every six months since the massive building opened in the spring of 2000.

They know what to do in case of a heart attack — raise their arms and make a fist, a signal that draws the instant attention of security guards who will come pronto. They know how the rows and levels are organized in the cavernous auditorium as well as the building’s evacuation routes. They know where the restrooms are and where out-of-towners can get information about taxis and restaurants. They know how to spot contraband in purses and backpacks (such as a small dog dressed in a suit) as the attendees go through the metal detectors.

The retired orthodontist and his wife are the apotheosis of calm and competence, even in the face of hostility or confusion.

They are among 800 Latter-day Saint volunteers who serve as ushers for the faith’s semiannual General Conferences, during which more than 100,000 people squeeze into five sessions. The events seem to run seamlessly, with this army of “guest service missionaries” — GSMs for short — maintaining orderly entering and exiting among the throngs.
Read the rest of this story at sltrib.com