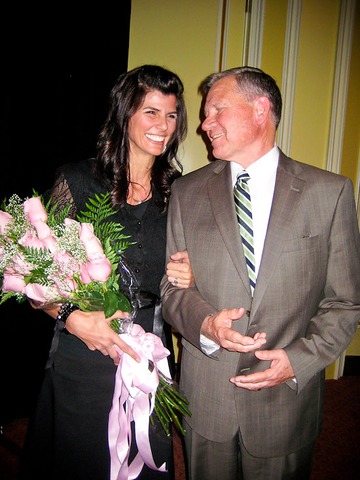 Each May , American Mothers Inc., the official sponsor of Mother’s Day, honors outstanding mothers all around the country with Mother of the Year awards.

Many LDS women received the award for their state and attended the national convention in Salt Lake City earlier this month. Several of these LDS award recipients shared their thoughts and feelings on the award, motherhood and how being members of the Church has influenced their parenting skills.

This year, Shawni Pothier, a Latter-day Saint from Arizona, is the National Young Mother of the Year. “Being LDS has helped me as a mother because it has made me aware of the personal relationship I can have with my Heavenly Father to help me through the ‘trenches’ of motherhood,” Pothier said. “Sometimes there are things I just don't know how to deal with and sometimes my heart breaks right in two about something I'm worried about with a particular child.  But I always know that there is help from above if I only ask for it.”

Pothier said it always feels good to be recognized for something she strives to do well and said motherhood can be thankless at times. She acknowledged the efforts of other mothers and feels many deserve to be honored by this title more than she does, but hopes she can be a good representative of mothers.

Pothier, as well as some of the nominees, have seen how the Church and the gospel have helped them in various ways including proving a support network of other mothers, knowing more about their purpose as well as having their character shaped and grounded.

Pothier was able to get to know all of the Young Mother nominees from the states represented and said she could instantly see why they received the award.

“They are all strong, deliberate, powerful mothers who have overcome tough things that have made them even stronger,” Pothier said.

Some of the mothers agreed that they felt both honored and overwhelmed when they were notified of their nomination.

“When I found out that I was selected to be the Mother of the Year for the state of Oregon, I was humbled and honored because of the wonderful women who have gone before me,” said Jacki Hunlow, a Latter-day Saint from Oregon.

One of the things that helped Hunlow was to see the good examples of mothering by other women in the Church, which gave her a good pattern to follow. She said the experiences she had in Primary, the Young Women program and Relief Society have all helped her raise her family.

“Because of the emphasis the Church places on motherhood, it made me feel good about being a mother and that my role as a mother was important,” Hunlow said.

Many of the nominees said the rewards of motherhood range from the everyday magical moments to seeing their children learn from and overcome failures, to having their children grow in confidence and independence, and turn into their friends as they grow older.

Hiedi Young, Young Mother of the Year for Idaho, said the most rewarding part is when her children are able to do things on their own and she loves it when they don’t necessarily need her in their lives, but still want her there.

Sharlet Bouchelle, Mother of the Year for Virginia, was overwhelmed when she found out she received the award for her state and tried to submit a new list of candidates to the search committee chair, but was told they were confident in the choice they made.

“I believe we are incredibly blessed as LDS mothers to have all the advantages gospel knowledge and understanding can give us if we allow it,” Bouchelle said.

Bouchelle did not know any of the other nominees prior to the convention, but after getting to know them, she felt honored and humbled to serve with them.

“They have already had a large influence in their families and communities with their involvement and service and now their children are following their examples and doing much to make this world an even better place,” Bouchelle said.