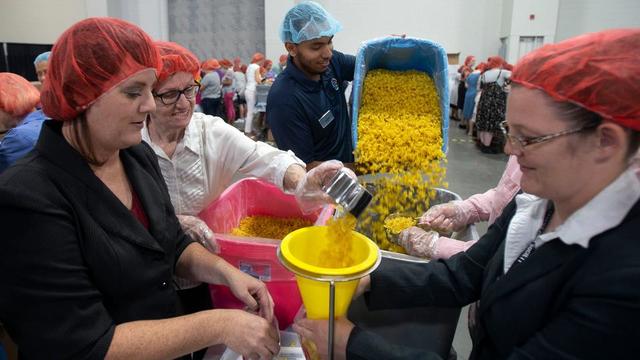 Latter-day Saint Charities partnered this week with Feeding Children Everywhere (FCE), JustServe, the United Nations, and American Airlines, to organize a service project to feed children all over the country.

“We’re grateful to partner up with an outstanding group of organizations all centered around making a huge impact with an amazing service project,” said Dave Green, the CEO of Feeding Children Everywhere (FCE).

The service project took place in Salt Lake City during the 68th United Nations Civil Society Conference held at the Salt Palace Convention Center. Conference attendees and volunteers from everywhere put on their red hair caps and got to work to assemble 375,000 meals for the children who are in need. Sister Sharon Eubank, president of Latter-day Saints Charities and first counselor in the general Relief Society presidency, joined right along with them. 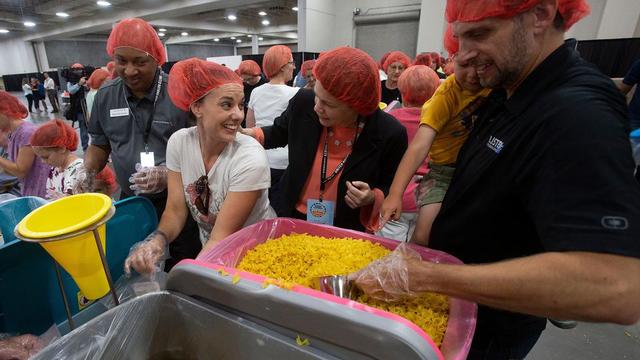 “Whenever there is a chance for us to show volunteerism in a community, we want to do that. And this just happened to be a chance here in Salt Lake City,” Sister Eubank said.

The room was alive with excitement, and the volunteers ranged from youth to adults to children and families. Sister Eubank commented on the children who were participating in the service project, noting one in particular whose mom took him out of school to teach him about volunteerism. “To see the next generation of leaders, and UN leaders, they’re here learning about service.”

People all across the country, including those in Utah, will receive these meal kits through FCE’s Full Cart Grocery Delivery Program. With this program, families can order groceries such as produce or meal kits and customize them online. The boxes of groceries are then sent to them for free with only the price of shipping costs. Green said that the Full Cart Grocery Delivery Program also incorporates self-reliance by helping people plan the meals into their budget.

Feeding Children Everywhere conducts data to learn about the people they are serving and recently discovered that we have been missing the mark on why people are hungry in America.

“What it boiled down to was the cost of living issue—so housing affordability, health care costs, college costs, food costs—and what we found was that people weren’t really asking for another handout. Really what they wanted was to use the money that they got from their job to buy food for their family,” he said.

It’s difficult to see the hunger firsthand, and Green says it’s a humbling experience. He’s seen many children who have little to nothing to eat in every place he’s traveled to.

Most often, when we think of children going hungry, we might think of third world countries, but food insecurity is also a big issue inside the United States.

One in five kids in Utah is food insecure, Sister Eubank shared, and there is a lot we can do right in our own communities to change that statistic. A volunteer opportunity like this one is the perfect start.

“Service stops us from thinking about ourselves and it turns us outward, and that’s what our civil society needs,” she said. 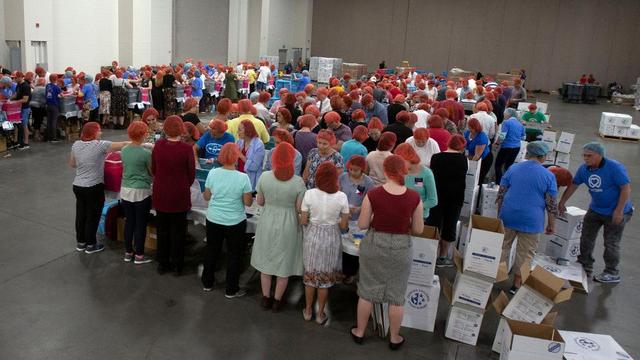