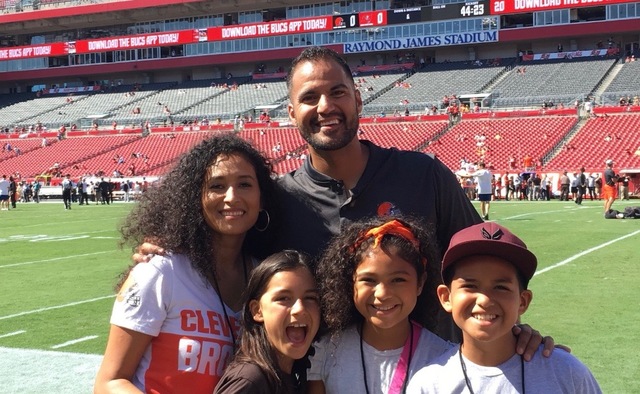 Justin Su’a coaches major league baseball players on cultivating mental skills to utilize on the diamond, but on this week’s episode of All In, Su’a shares ways to strengthen your mentality, specifically as it relates to faith.

In 2017, Su’a told the Deseret News how he has seen faith impact the lives of the athletes he coaches.

“It gives them perspective. You can see more,” Su’a said. “Those who have more of a spiritual perspective, those who believe in God and believe in a bigger picture and trust in His timing and what He wants for a person, they don’t get wrapped around statistics as much, they don’t get tied up in adversity they’re facing on the field because they understand that their sport is something they do and doesn’t define who they are.

“I literally have seen that over and over and over again. Athletes who are struggling or who have career-ending injuries, you see that they have this sense of peace in them. Yes, it’s frustrating. Yes, it’s still difficult. It’s still painful. They still don’t want to experience it. However, when the smoke settles, they’re able to be a little bit more resilient.”

During his appearance on All In, Su’a shared five principles for developing a resilient mindset. You can read an excerpt from his conversation with host Morgan Jones below or listen to the entire interview here.

Justin Su’a: Yeah, I think if I can give just kind of a global umbrella principle. There's great research out of Stanford. Carol Dweck, Dr. Carol Dweck did it and she wrote a book called Mindset. And there's incredible research done on this that NFL uses, [that the] military uses. And it's very practical, very simple and easy to use. Basically, there are five principles that to cultivate the ideal mindsets, a resilient mindset or pliable mindset and mental toughness, however you want to phrase it. So number one: Principle number one is basically learning from failure. To have the ability to learn from failure where this growth, these growth mindset individuals, they learn from failure as opposed to viewing failure as something that defines who they are. The second principle is a growth mindset person; they embrace obstacles where the fixed mindset person, they avoid obstacles—they don't want the hard road because [when] they go and try to do the hard thing, failure is probable, and they hate failure. But the growth mindset person, they want to do the hard thing, they want to embrace adversity because they know that become stronger as a result of it. And number three is effort level of the growth mindset person. They give their best no matter what., and sometimes your best is going to look, it's going to look different from day to day. Your best today might be not as good as your best yesterday or your best before. But they know that, "Hey, maybe all you have is 90 percent today. So just focus on the 90 percent you do have as opposed to beating up on yourself on this 10 percent you don't have." The [fourth] one is receiving feedback—critical feedback. A lot of youth, when we talked about youth a lot of times and, "Hey, Mom and Dad love you," the best athletes in the world, they have coaches, they get feedback. And to embrace it and to use it as an opportunity to learn as opposed to a signal that, "Hey, you're not good enough." A fixed mindset person, they ultimately don't believe they can change, which is why they struggle with feedback so much. And lastly, which goes very well with what you're talking about social media, is the success of others, not being threatened or jealous by the success of others, and as opposed to learning from the success of others and applauding their success, but really essentially learning from it. "What are they doing that I'm not doing? How can I be better? How can I take what they're doing and adopt it and make it become my own?" But a lot of times in social media in particular, we compare other people's highlight reel to our own reality, and sitting with a lot of athletes who have millions of followers and millions of dollars in the bank and people clamoring for them and thinking their life is perfect, I have a front row seat to learn that it's not and [that] they struggle, and they have insecurities, and they lack confidence. But you look at their Instagram page and you're like, "Wow, these people have the perfect life with the perfect marriages." And it's just not true, myself included. We have so many rough days and bad weeks, and marriage is difficult, and parenting is difficult, and kids are disobedient, and you waver and you struggle and you fail. But as you hold to these principles of the growth mindsets, it can help you navigate the storms of life, both in spirituality and in your work and school, wherever you are.

MJ: Yeah, I want to go back to one thing that you said in particular, Justin, which is that idea of when you have a day where you only feel like you have 90 percent. And that's something that I've been working on. This is going to sound weird, but I've been working on it in terms of my personal spirituality and scripture study. I think I used to have this mindset of, you know, I want to study for a chapter a day, or I want to study for 15 minutes. And I'm going to read my scriptures for 15 minutes a day. And it was just kind of this box that I was checking off. And I've recently tried to shift that mindset and recognize that my main goal is to spend time with God, and to want to spend time with Him. And so some days I get home from work, and because my job is faith-centered, sometimes—this is going to sound terrible—but I'll get home and I'm like, “I can't read my scriptures right now.” And so instead, I've tried to shift and cut myself some slack and recognize, okay, maybe right now it's a better idea to read a conference talk where I'll still get some scripture, but it won't be as deep or I won't have to focus as much. And I think in doing that it's created a joy again for me about that time that I'm seeking to spend time with God and strengthen my relationship with Him. And so I just wonder, do you have any thoughts on that?

JS: Yes, that is that's beautiful that what you just said, and it's, and it's so true. And I shared your sentiments. When I was actually a seminary teacher I felt the same way. And I taught the gospel out of the scriptures every day and thinking about, "Okay, I don't know if I want to read scriptures anymore." I taught it for a living every single day. And so, as you mentioned that, I was just smiling and thinking, "Wow, You took the words right out of my mouth. That's exactly how I felt." I love what you said. And one of the things that I've learned from these elite performers in the world is [that] it comes down to their habits. And sometimes it's just doing something, an object in motion tends to stay, stays in motion, Newton's law—it just stays in motion. And sometimes your motion is just a baby step. Maybe it's just one step. Maybe you can run 30 feet one day and you can just crawl the next day, but what happens is a lot of times, [people] beat up on themselves, and they think "Oh, just because I can't read for 15 minutes or an hour, oh, okay, then I'm not going to do anything." You see this with a lot of people with dieting as well. "Oh, I took one bite of pizza. You know what, it's over, I'm just gonna eat the whole thing." It's like, "Wait a minute, no, you could make the decision just to end with that one piece, or maybe that one slice. And that's it." But I think you are on the right track in terms of, even if you just do one little thing, and one thing we always talked about is a little becomes a lot, and you might read one verse, just one verse, but how about you pull out as much as you possibly can in that one verse? It's on your mind, you think about it, you talk to your friends about it, or maybe you write about it, you're just chewing on it throughout the entire day. You'll get a lot more out of that one verse doing that the entire day as opposed to rushing through, just kind of being in and out and not fully invested in a 15 minute scripture study session, just so you can check the box as you mentioned. And so I love what you said, because I think a lot of people experience that. Whether it be in their spiritual life, their fitness life, and in work or whatever it may be. But that's a great point. Even if you do a little bit, just staying consistent with that, it leads to a lot.

Listen to the entire interview here or read a full transcript of the conversation with Justin Su’a here.