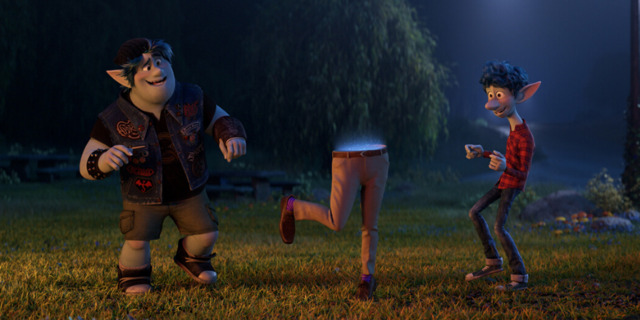 Set in a suburban fantasy world, brothers Ian and Barley Lightfoot receive a wizard’s staff, a prearranged gift from their late father. The staff comes attached with a spell, which enables the staff’s user to bring back a loved one for one day. The brothers try reviving their father, but when they only succeed to bring back his lower half, the two embark on a quest to bring him back entirely.

After doing a string of original releases like Inside Out and Coco, Pixar focused on sequels like Incredibles 2, and Toy Story 4. Now, Pixar is returning to new original feature films and their latest is Onward, a suburban fantasy based on a deeply personal story from director and co-writer Dan Scanlon.

As you may recall, Pixar has dabbled in mythical fantasy before in their highly underrated 2012 film, Brave. It dealt with kooky witches and mysterious spirits, but with some moderation. Onward goes all-out and the opening minutes feature some truly magical scenery. This fantasy world has some character designs that are reminiscent of Pixar's Monsters, Inc. movies while others feel like they came from the Arthurian tales or other mythical worlds.

It may be no surprise, but their animation quality once again hits a new level and that development is shown throughout the film. Onward is full of its own ideas. Its setup of a magical land that quit practicing magic because there were easier and simpler ways of living is quite perfect, but then we transition to the introduction of our two main leads.

At first, Onward struggles in establishing its characters and story. The two brothers, Ian and Barley, start out very paint-by-numbers. Ian starts out like another run-of-the-mill Tom Holland role: socially awkward and introverted. Having already seen Tom Holland play many of those characters, you get the feeling like Ian's going to be a bland copy of those parts. Barley, though slightly more unique being a magical historian and activist, seems like the typical brash older brother who always gets in trouble. In addition, the dialogue in the first act can be exposition-heavy. While some it can be thoughtful, overall it seems random. Fortunately, the remainder of the film doesn't have the same issues.

After ten minutes or so, the film kicks into high gear and from then on, there is nary a dull moment. On the surface, Ian and Barley may seem like blank slates, but as they embark on their mission, we discover that there's more to them than initially introduced. As they journey to finish the spell, we learn what both brothers wish to experience with their father. The way these desires play into their characters is rather clever and emotional. The film's story unfolds through the points of view of many characters, except for one major character and this plays into that individual's arc. It's a good, less obvious way of doing character development that gives the film more detail to read into upon future viewings.

Onward is a movie filled with personal touches. At certain times, the sensitivity can seem so overwhelming that it can't be mistaken for anything but personal. In particular, there's one moment early on where Ian listens to an audiotape of his father and starts talking in between the gaps, creating a makeshift conversation. Knowing that Scanlon's own father passed and that he only had an audio recording to remember him by makes the scene even more powerful. This one scene helps set the tone of the rest of the movie. It is adventurous, yes, but also incredibly touching, as only Pixar does. I will be thinking about the ending for quite some time.

(Side Note: For Pixar, typically, they show one of their short films in front of a new feature. With Onward, Pixar goes the Coco route and plays off an existing character. Instead of showing an original short, a Simpsons short is presented in front of the film. The short stars the youngest member of the Simpson family, Maggie, and may perhaps be fun for fans of the show. Don't worry, it's nowhere near as long as Olaf's Frozen Adventure was in front of Coco. For me, I viewed it as an obvious plug for one of Disney's newly acquired brands. My hope is that, in the future, Pixar will resume releasing new shorts in front of their films. Though, considering they're releasing some to Disney+, who knows if that tradition will continue?)

Is It Okay for Kids? (Rated PG)

In terms of content, Onward is no different from similarly rated Pixar films like Inside Out, Coco, or Incredibles 2. There are some explosions, traps, and colorful monsters, but they’re played more for laughs than scares. There’s no profanity or sexual content to speak of. For families, this will serve as the perfect selection for a trip to the cinemas.

With Onward, Pixar continues to supply messages that both children and adults can enjoy and contemplate. This film teaches the importance of faith (Matthew 9:22), courage (Joshua 1:7), family bonds (1 John 2: 10), and self-improvement. Both Ian and Barley learn to be bolder and not be content with the easy and more obvious path. Onward emphasizes being bold and taking risks in life every now and then.