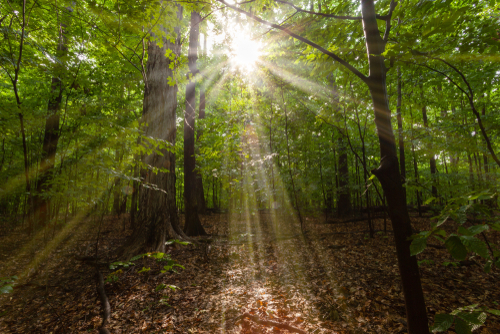 Many years ago, I recall hearing President Spencer W. Kimball state that each time he participated in a temple endowment, he learned something new. I thought to myself, How is this possible? He’s surely heard the endowment presentation hundreds if not thousands of times. How could he gain fresh knowledge each time? I’ve since come to understand that the Holy Ghost teaches us different things at different seasons, depending on our preparation and readiness to hear. In this bicentennial year of Joseph Smith’s First Vision, my thoughts have turned to this incredible experience that opened the heavens once again.

I’ve studied this event more in the past several months than ever before. Even though I was familiar with Joseph’s experience long before this year began, I’ve learned new things that I believe will benefit all who strive to manage their own personal emotional and mental health struggles. Here are four of those insights.

We Must Act First

Joseph’s decision to act was the result of considerable confusion about which church was true. He relates how the different sects all claimed to have the truth, yet they taught different principles. Upon reading James 1:5 and realizing he could ask God his questions directly, Joseph related, “At length I came to the conclusion that I must either remain in darkness and confusion, or else I must do as James directs, that is, ask of God” (Joseph Smith–History 1:13). I find it very interesting that although Joseph’s problems were caused by the confusing teachings of the preachers, the solution was found in Joseph’s own actions. He couldn’t wait around for the preachers to resolve their differences—he had to act for himself.

► You'll also like: Latter-day Saint Psychologist: 3 Words that Can Carry You Through Mental and Physical Suffering

Similarly, all my psychology clients have problems. I would estimate that with about half of these clients, their problems have largely been caused by the actions of others. Many of my clients rightly state, “It’s not my fault.” But then they follow it up with, “When so-and-so apologizes or makes needed changes, then I can forgive and move forward,” these clients end up stuck for a very long time, because as most of us know, it is uncommon for those who have wronged us to seek our forgiveness. Joseph knew he had a choice. He could either remain in his unpleasant situation or do something within his control to resolve it. This is a critical theme in managing personal challenges. Sometimes we wait for “something to happen” to move down the path of healing or change. Putting someone else in the driver’s seat of our personal progression is always a bad idea. Regardless of the source of our trials, we must do what we can to change and move forward. Don’t wait for others to make the first move; the first move is yours.

When Joseph knelt in the Sacred Grove, he uttered his first vocal prayer and immediately experienced intense opposition. This wasn’t simply temptation or distraction—it was the full measure of Satan’s incredible power. Joseph couldn’t speak, despite his efforts to do so. He records, “Thick darkness gathered around me, and it seemed to me for a time as if I were doomed to sudden destruction. But, exerting all my powers to call upon God to deliver me out of the power of this enemy which had seized upon me . . . ” (Joseph Smith–History 1:15–16). As I read this passage, the phrase “exerting all my powers” stood out to me. Joseph did not exert a portion of his strength or give some effort; he gave everything he had. We often find ourselves in similar situations. Clouds of anxiety and depression obscure our vision. Satan’s mists of darkness hide the covenant path. What are we to do? We can act as Joseph did, exerting all our powers to battle personal challenges. I understand there will be days so difficult, where your best efforts barely move the needle. Don’t worry about that. Keep trying with all you’ve got. I believe we should do something every day to move forward, as small or grand as that is. The more effort we apply, the greater the potential results.

► You'll also like: Latter-day Saint Psychologist: The Lord’s Role vs. Your Role in Anxiety Management

We don’t know how long Joseph was enshrouded in darkness and despair. I’m sure it felt like an eternity to him. We know it lasted long enough for him to reach the edge of hopelessness and consider surrender. “At the very moment when I was ready to sink into despair and abandon myself to destruction—not to an imaginary ruin, but to the power of some actual being from the unseen world, who had such marvelous power as I had never before felt in any being . . . ” (Joseph Smith–History 1:16). At the very moment. How many times have we experienced similar trials in our lives and been pushed to the brink of our capacities?

At the very moment when I was about to give up on my wayward son and abandon hope he would ever return . . .

At the very moment my depression symptoms were so extreme I felt I could not go on . . .

At the very moment my faith was so brittle I considered leaving the Church for good . . .

Why does the Lord push us to our limits? Why wait to send an angel until right before Abraham plunges the knife into Isaac? Why delay the parting of the Red Sea until the Egyptian armies are bearing down on the children of Israel? I honestly don’t know, but feel it has something to do with developing strength through trials. We learn important things about ourselves and our capacities when we are tested and tried. If the Lord were to rescue us from our challenges the moment they begin, our growth would be stunted.

I know there are many of you who currently feel like you are at the end of your rope and cannot go on. Please don’t give up. Keep fighting and exercising faith in better days to come. I am comforted by these heavenly words spoken to an older, wiser Joseph Smith: “And above all, if the very jaws of hell shall gape open the mouth wide after thee, know thou, my son, that all these things shall give thee experience, and shall be for thy good” (Doctrine and Covenants 122:7). We can endure our challenges for as long as the Lord chooses to permit them to last.

The Lord Can Heal Us

The prior three principles require a lot of effort on our part. We have to act. We have to work hard. We have to keep working hard even when our strength is almost gone. What is the reward of our diligent efforts? The reward comes to us even as it did to the boy prophet. “Just at this moment of great alarm, I saw a pillar of light exactly over my head, above the brightness of the sun, which descended gradually until it fell upon me. It no sooner appeared than I found myself delivered from the enemy which held me bound” (Joseph Smith–History 1:16–17). Notice the timing of the Lord’s appearance and Satan’s retreat. The Lord’s power immediately dispelled Satan’s darkness. There was no battle, no back and forth, no gradual decrease in distress. The adversary’s influence is meaningless when it comes to the majesty and glory of God. Joseph’s anguish was instantaneously eliminated as Father in Heaven chose to do so.

I know what some of you might be thinking: “Brother Morgan, I’ve suffered with anxiety for decades. If the Lord has such power, why hasn’t He healed me?” To answer, I’ll state two truths: First, the Savior has power to instantly heal all of us from affliction. Second, He applies His power with the correct timing to maximize our spiritual growth.

► You'll also like: Latter-day Saint Psychologist: Why I Wish My Nephew in a Wheelchair Could Be in All My Client Interviews

Consider Joseph Smith’s life as an example. While it is true that he was immediately delivered from Satan’s power in the Sacred Grove, he was not spared from many of life’s difficulties. He was persecuted, beaten, arrested, incarcerated, and ultimately murdered in cold blood. Where was the pillar of light when he was being tarred and feathered or dragged from his family by his enemies? The redemptive and liberating power of God is not about when it will happen, but that it can happen. Knowing there is a pillar of light waiting for all that will deliver us from our suffering is cause for great hope. It helps us look heavenward and toward better days. It gives us strength to endure in times of trial.

Hopelessness is a tool of the adversary and leads to despair and damned progression. Hope brings peace and reassurance. “Wherefore, whoso believeth in God might with surety hope for a better world, yea, even a place at the right hand of God, which hope cometh of faith, maketh an anchor to the souls of men, which would make them sure and steadfast, always abounding in good works, being led to glorify God” (Ether 12:4). I don’t know when your pillar of light will come, but I know that it will. In the meantime, let’s rejoice in the hope that through the Atonement of Jesus Christ, all will be made right in a coming day.

Our challenges will not resolve themselves. As with Joseph Smith, we are required to move forward, act diligently, endure in faith, and hope for deliverance. He relates his experience following the First Vision: “When I came to myself again, I found myself lying on my back, looking up into heaven. When the light had departed, I had no strength; but soon recovering in some degree, I went home. And as I leaned up to the fireplace, mother inquired what the matter was. I replied, ‘Never mind, all is well—I am well enough off’” (Joseph Smith–History 1:20).

God bless us all that we can find “all is well” as we faithfully navigate the difficulties of life.