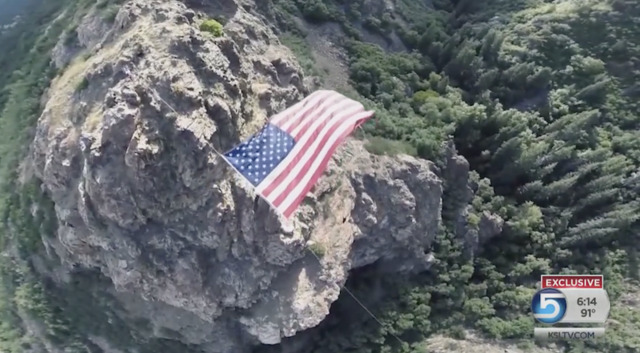 For the past eight years, a 50-pound American flag has hung over Little Willow Canyon in Sandy, Utah. At 30 feet by 60 feet, the flag is anchored on either side of the canyon and supported by 500 feet of plasma rope, waving proudly in the breeze from Independence Day to the Saturday after Pioneer Day.

But this year, the flag disappeared. Darren Nord has helped place the flag ever since his neighbor, Herald Haugan, started the tradition of hanging the flag in the canyon eight years ago. Since Nord has taken initiative for fundraising when the flag was vandalized in years past, he was the first to be notified when the flag went missing this year.

As Haugan was out of town when Nord got the call, he and his children, Wil, age 14, and Lexie, age 18, joined with three other men to evaluate the situation. The three men retrieved the rope—sturdy enough to hold 8,000 pounds—which had snapped, and the Nords continued in search of the flag. 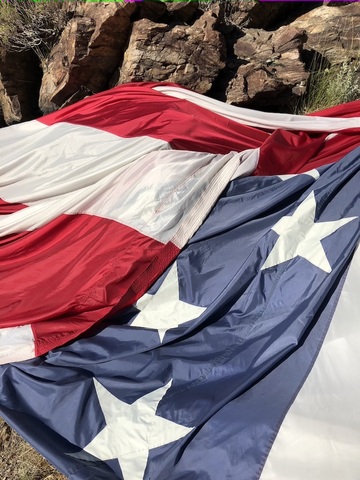 Lexie was the first to spot the red, white, and blue on a cliff—but the flag was too large for the backpack they brought, despite the bag’s expandable design. Regardless of how they tried to push the flag inside, only half of it would fit.

“I’m really getting doubtful, I’m like, ‘How are we going to do this?’” says Darren. “So that’s when I said, ‘Heavenly Father, we need some help here. I don’t know how I’m going to be able to do this.’ That’s when Lexie said, ‘Dad, why don’t we just take off our belts and even our shoelaces if we need to [in order to] tie this on the outside?’”

So the Nords did just that. Folding up the flag multiple times and rolling it like a sleeping bag, they secured the flag with Darren’s belt and then strapped it onto the backpack with Lexie’s belt. But on the way down the mountain, the flag started to come loose. As the family crossed rocks and wound around narrow passages along the cliffs, Lexie held onto the flag, blindly following her dad who was just ahead of her.

“She couldn’t see in front of her and she only saw me,” says Darren. “And so she said, ‘You’ve got to tell me when there’s rocks and there’s steps.’ It’s kind of like she was relying on me to give her guidance.” 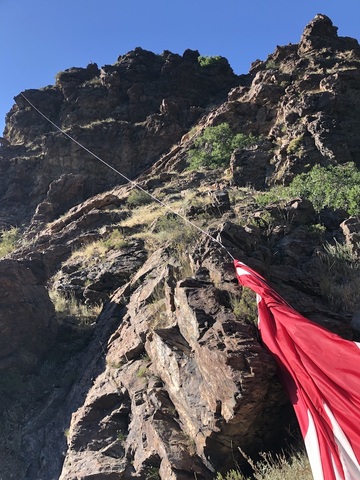 Wil scouted out the trail ahead of them and took video of the rescue mission—which ended up requiring three and a half hours on a hot summer day.

Although some people might have given up on retrieving the flag, Darren says he and his daughter have some experience backpacking, which helped—although the 50-pound flag felt more like 70 pounds while they were headed down the mountain. But backpacking experience aside, they continued for other reasons—their family has a history of patriotism they are proud of.

“Both my grandpas served in the Army and the Navy, so that was particularly important to me,” says Lexie.

In a KSL-TV video, Wil adds that the flag “represents all of me. I’m a proud American.”

The flag also has significance for the local community. This year on the Fourth of July, Darren says people watched the flag placement from blankets in the park where the canyon is located. Several firefighters helped to put up the flag, and others played patriotic music from below.

“I wish the flag. . . stayed up this year. Unfortunately, it had a rope malfunction,” he says. “That’s been the sentiment from most neighbors in the area, that this is probably the most important year and how much anti-Americanism is out there . . . . We knew going into this when we put this flag up, there was kind of a heightened alert about potential vandalism this year than any other year.” 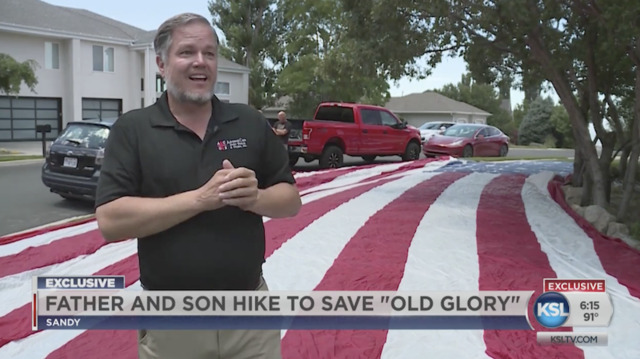 Haugan plans to set up the flag next year when more rope can be acquired to support it. When that happens, the Nords will be there.

“That’s been something we look forward to,” says Darren, adding his love for God and country. “It’s everything . . . we wouldn’t have this country with freedom without the sacrifice of so many who gave their lives.”

Watch a video about the flag rescue at KSL-TV.

All other images courtesy of Darren Nord unless otherwise specified