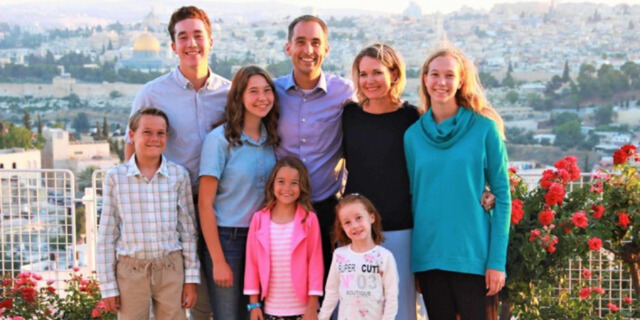 This week’s bonus Father’s Day episode of  This is the Gospel celebrates stories from faithful men who are braving the wilderness of fatherhood. John admits he's not very handy as his attempts to create the perfect swing set fall short and, as a result, he allows comparison to take over. John isn't sure he's got what it takes for fatherhood to begin with but when infertility makes that even harder, he learns that “what it takes” might be different than he imagined.

Read an adapted excerpt from John’s story below. You can also listen to the full episode here or read a full transcript here.

A lot of dads are really good at fixing things. But I've got to be honest, I'm not very handy. If there's a screw, I can screw something in. If there are multiple levels, or if there's an instruction manual especially, I'm just not very good at following those instructions. It just doesn't make sense to me.

Like a few years ago, one of our toilets stopped working. So, I tried a few different things. I used the plunger—that didn't work. I grabbed a snake (this is the tool by the way, not the animal)—that didn't work. And so, I gave up. I was like, “Well, I guess we'll never be able to use this toilet again.” I came home from work a couple of days later, and here's my wife, she's rocking the toilet back and forth. She picked it up (I didn't even know you could pick up a toilet) and she threw it on the ground—and “click,” out popped this little jewelry box that one of our kids had shoved into it. So, the good news was the toilet was fixed. But the bad news was I didn't fix it. But you know, you can only call on your ministering brothers so many times to come fix stuff for you before you start to feel like, “I should be doing this for myself.”

A couple years ago, I decided it was time for me to build a swing set for my children. I went to a manly store, Toys R Us, bought a swing set kit, brought it home, and unwrapped it. And it turns out there were about 27 steps to building the swing set. And the first step took me eight hours. It was so painful. I talked with someone recently and they said that their family, for fun over the weekend, bought and built a swing set. They put the whole kit together in 48 hours. That was not my experience.

It took us 12 weeks with tons of help from my brothers-in-law. But finally, the magical day came when the swing set was completed. It was in May. Weather was nice. We're eating pizza on the lawn. The only downside was that one of my daughters came up to me and she said, “Dad, I love the swing set. But there's one problem, it just has three monkey bars.” And I said “Honey, you will love those three monkey bars. Cherish each one because I promise you, I am never building another swing set.” But other than that, it was great.

So right now, I'm a religion professor at BYU, but at the time when I was building the swing set, I was a full-time seminary teacher, which meant every day I would teach high school students lessons from the Bible or the Book of Mormon. And so, the day before finishing the swing set on a Friday, we had this class focused on comparison and not comparing yourself to others. One of the things that I got really excited about, a little scripture connection I hadn't noticed before, was that Moroni was really worried that people would make fun of the Book of Mormon and not like it. And he says, “Look, I'm not as good of a writer as the brother of Jared was.” And I'd never noticed that Moroni was comparing himself to the brother of Jared. And that was the context in which the Lord said to Moroni, “My grace is sufficient, I can make weak things become strong unto you” (see Ether 12:27).  And I was surprised to see that even amazing heroes from the scriptures like Moroni compared themselves.

That night, my family and I, we were driving over to our brother-in-law's house for a little get together. We parked the car on the street and as we're walking into the backyard, I noticed, I think for the first time, that my brother-in-law had a swing set. I don't remember ever seeing a swing set in his backyard before. I looked at it and it was obviously bigger than my swing set. And I just happened to notice the monkey bars. And I counted 1, 2, 3, 4, 5 monkey bars on that swing set. And I thought, my swing set is garbage. I think I was particularly sensitive to it because I wanted to build this awesome swing set for my kids. I never fixed anything. I never build anything. And although everyone had a lot of fun on Saturday playing with the swing set, the one complaint that I'd received was that there were only three monkey bars. [I was] even imagining maybe my kids were looking at his swing set being like, "Oh, now this is a real swing set." This swing set that I cherished was my prime creation two days ago. Now I hated it and the only difference was the comparison, comparing my swing set to somebody else's.

The day after seeing my brother-in-law's swing set I went back to my seminary class, and we talked a little bit more about comparison. It was more real for me. It wasn't a problem that they had or something that I had to help them fix. It was something that we all were struggling with, and something that we could all be working on, hopefully, finding ways to overcome the challenge. I love going back to this phrase from Jesus though, when he says to Moroni, “My grace is sufficient” (Ether 12:27). Because Moroni, I mean, he was working on a really big, important project, and he felt like his efforts weren't enough. And I can relate to that sometimes. And who knows, maybe Moroni, maybe he really wasn't as great of a writer as the brother of Jared. And maybe I'm not as good as that other person. But the Lord has put me in this place right now. Maybe I'm not the best father in the world, but I am the father of my children. And I don't need to compare myself to other fathers out there.

The more I understand grace, it helps me in my fatherhood because I realize I don't have to do it all. I want to be a super dad. I want to be the dad that fixes the toilet, that builds the amazing swing set, that does all these super cool things—but I fall short a lot. And understanding that the grace of Jesus Christ is there to strengthen me, to help me get through things that I couldn't do on my own also helps me feel a little bit more patient and understanding with myself when I don't meet my own high expectations. I'm a perfectionist and I want things to be perfect. But I realized I don't have to make things perfect. That's the job of Jesus. I do the best I can, and I don't have to worry about what others think. I don't have to look sideways; I can look up to heaven. He can take weak things and make them strong. His grace is enough. And the three monkey bars are enough. And that brings a lot of peace.

Find more teachings from John Hilton III in his new book, The Founder of Our Peace. Christ wants us to feel peace, hope, and even joy—and He alone is the source of true and everlasting peace. Through scriptural insights, personal experiences, modern psychological research, and illustrations, The Founder of Our Peace offers Christ-centered patterns to help us combat these challenges and invite greater peace into our lives today. New understandings of powerful scriptural phrases and stories will deepen your hope in the Savior. You will find strength in Jesus Christ to help you and those you love walk the path of peace. Available now at DeseretBook.com.