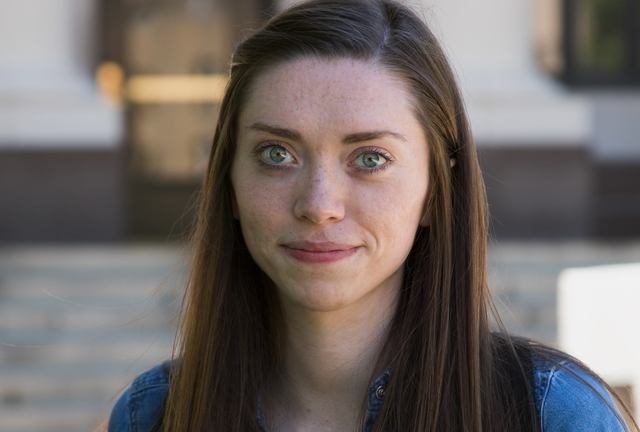 Lesbian Mormon Shares a Powerful Message to Members of the Church: "I Want People to See My Face"

"Faces of USGA," a nonprofit photojournalism project that dedicates itself to spreading awareness of LGBTQ students on BYU campus, recently featured a lesbian student at BYU, one who simply calls herself a "Mormon girl." (USGA, or Understanding Same-Gender Attraction, is an unofficial student group at BYU.)

In one particularly powerful message to members of the Church, "Mormon girl" compares her experience as a lesbian within the Church to the moment in a fifth-grade class her teacher and fellow students began mocking Mormon beliefs, not knowing she herself was LDS.

"Of course, they didn't think they were talking about me. They were sure there were no Mormons in their class because if there were, they'd know. It was a frustrating feeling. People were making assumptions about what I believed and what I was like based on information that was outdated and untrue. I wished people would talk to a Mormon, talk to me, to find out what I believed and what I was like," she writes. "This is not unlike how it feels to be an LGBTQ person at BYU. We're often talked about as if none of us could possibly be present. People talk about us in snide, mocking, or outright antagonist tones. Assumptions are made about what we're like and what we believe based on things that aren't true. I want so badly for someone, anyone, to come to me and ask what I experience, rather than tell me how I feel and what I should do."

This remark reminds me of what Josh Searle, a gay Mormon featured on the Church's website Mormon and Gay, told East Idaho News. He said, "I learned it's such a powerful thing to walk into someone's suffering and just be present there. You don't have to say anything or do anything, but just being present [and saying] 'I am hearing your pain' has immense power to lift someone else's burden."

In addition to sharing powerful messages, "Mormon girl" also shared her story of coming out:

"Coming out to myself was a lot of work. I didn't think that being gay was something that could just happen to me without my permission. . . . I then had my first experience in which I recognized that it wasn't just admiration; I was having feelings for a girl. I became quite angry with myself. I still believed that I wasn't born gay and I was certain these feelings were my fault. I thought it was my responsibility to stop having those thoughts and I wouldn't qualify for Heavenly Father's help until I did. So, I did everything I knew how to do: I prayed more, I read my scriptures more, I listened to conference talks every morning, I tried to be the picture of righteousness. But I wasn't perfect and every time I could sense the feelings creeping back in I blamed it on the day I didn't write in my gratitude journal or the night I prayed in my bed instead of kneeling down. When I finally allowed myself—at age 22—to consider that maybe I had no choice in the matter, it felt like a whole new world opened. Everything started to make sense. For the first time in my life, I was beginning to understand myself. I was the same person, there was just more of me than I realized. God didn't hate me, I wasn't a monster, I was just gay.

"I regret all the shame I used to feel. I'm proud of who I am. Knowing that I am a lesbian is a privilege and a blessing."