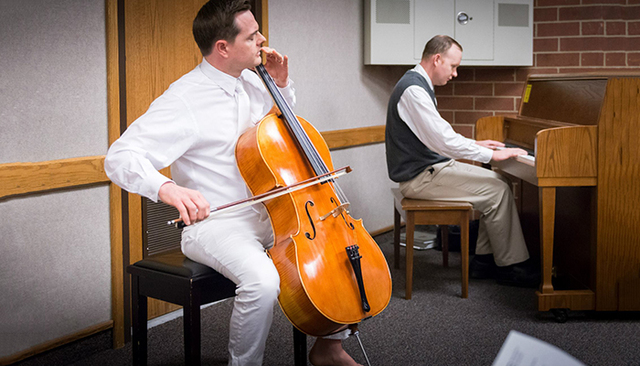 MR says: What a sweet testimony of the power of music and the love God has for each of us. He is mindful of us and fills our lives with countless miracles.

For more incredible conversion stories check out The Unbelievable Love Story of an Atheist and a Mormon.org Volunteer or What Happened When My Rabbi Told Me to Read the Book of Mormon.

In January of 2015, some of the most talented living LDS musicians filed into a nondescript Institute building in Orem, Utah. Lindsey Stirling, Jon Schmidt, Marshall McDonald, all came to witness the culmination of a long string of miracles.

Matt Janovsky, a Pittsburgh native and extraordinary violinist, was being baptized, and Steven Sharp Nelson, the cellist of the Piano Guys, would be performing the honors.

Matt’s conversion story begins with what he describes as a miracle.

God Knows Us, Even in Dorm Rooms

Dorms at the University of Pittsburgh-Johnstown, where Matt Janovksy experienced a miracle.

In early December 2012, Matt studied pre-med in at the University of Pittsburgh-Johnstown.

The weather was too warm for snow and ice, but too cold to do anything outside but walk between classes. And the persistent drizzling refused to break into a full-hearted storm. It was lonely weather, perfect for studying, I suppose, if only Matt could focus on his chemistry book.

But Matt could only trudge through the study material for the classes he was on the brink of failing. Years ago he had stopped attending St. Mary our Lady of Guadalupe Church and gave up his position as an altar server.

His YouTube playlist ticking along in the background, Matt rued the irony that while the loss of the church had felt so subtle at the time, now he longed desperately for its peace, its community.

Matt felt alone, lost, anxious, forgotten. He threw his book onto the ground. “I can’t do this anymore,” he said to no one. But screaming to himself reminded Matt of Who he used to speak to when he was alone. He turned his computer off and did something he had not done in years—pray.

Today Matt struggles to remember the precise words of the prayer, since what he communicated was more guttural, more conceptual than linguistic.

His sleeping computer sprang to life, and this song began to play.

As Matt listened to the remarkable song by a group he had never heard of, he felt as though his prayer had been heard. And a conviction solidified that he needed to pursue music and that if he were faithful everything would work out.

Did an angelic hand reach down from heaven and start the music, or did Matt simply bump his computer that autoplayed a related video?

I’m not sure it matters if this was a sudden broad miracle or a subtle placement of all the right pieces for a young man’s heart to be softened. But for the first time since he left his Catholic faith, Matt Janovsky was on the path to God.