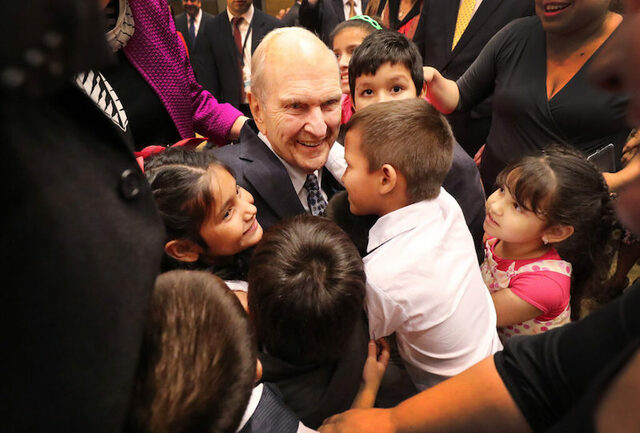 On Thursday, September 9, 2021, President Russell M. Nelson turned 97 years old, and in less than a year he will become the oldest General Authority in the Church’s history.

This week on the Church News podcast in honor of the prophet’s birthday, Church News editor Sarah Jane Weaver interviewed Michael Colemere, managing director of Church Communications, and Sheri Dew, executive vice president of Deseret Management Corporation, on their insights about the prophet.

In the episode, Weaver, Colemere, and Dew reflected on President Nelson’s energy during his ministry and the many countries he has visited. They also noted how children have been drawn to him.

“It was in Paraguay again, as he comes down off the stand to go greet these other dignitaries, there were maybe half a dozen children and they were little boys—I’m going to say they’re 8 year olds, 6 year olds . . . they practically gang tackle him,” Dew said. “In fact, it’s like they kind of took him down to his knees. Later, I teased a couple of the security guys. I said, ‘So, geez—security kind of collapses when the children mob the prophet.’ But [the children] were just drawn to him and he’s drawn to them.”

► You may also like: 45 photos of President Nelson that will make you love our prophet even more

Dew and Colemere also talked about how the prophet’s invitation last year to #givethanks came about. Both had mentioned to the prophet that Thanksgiving and Christmas were approaching and asked whether there was something he’d like to do for it.

“He then says, ‘It’s not a bad idea. Let me think about that.’ Now, this is Thursday afternoon,” Colemere recalled. “Friday morning, we get this early email: ‘I need to meet with you both right away, and Elder [Ronald A.] Rasband.’ He tells us that he’s been instructed to do a video about giving thanks, and how the world can give thanks. And he said, ‘And this video needs to be 11 minutes long.’ Now, Sheri’s and my jaws are dropping to the floor. ‘President—11-minute videos on YouTube or anything don’t work,’ but, you know, we’re just biting our tongues on this, thinking, how’s this ever going to work? And he’s telling us every little detail about this. It was extraordinary.”

Those details included what day the video should be released and at what time of day, Dew said, while Colemere added that 65 million people have now seen the video. Dew also gave her perspective of the story:

“What Michael says is exactly what happened. If I’m remembering this correctly, when we talked to him about—'President, it might be time to do another message’—and I think we even dished up an idea, in the most general terms, and I remember him saying, ‘Well, sprinkle a little fertilizer on that,’ was his phrase, and, ‘Let’s talk about that next week when we meet next week.’

“So then, to get the message the next day: ‘President Nelson needs to talk to you again. Elder Rasband needs to be there.’ OK, here we go. And, he said to us, basically, ‘Your idea is not a bad idea. It just wasn’t the right idea, and here’s what the Lord has told me.” I go, ‘OK.’ I think—Mike will know if this is true or not—but I think that never before that moment had as many people actually heard a prophet’s voice.”

Listen to the full episode on Church News.