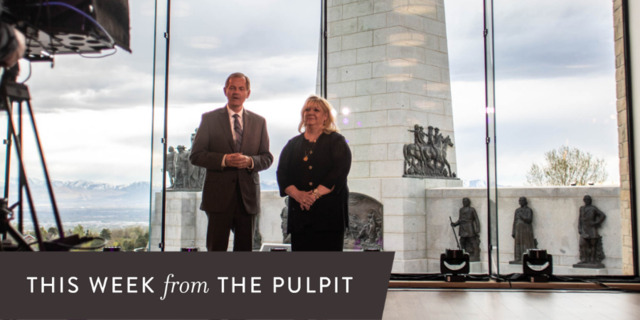 Looking back and looking forward: Learn from these inspiring messages by Church leaders this week

Editor’s note: “This week from the Pulpit” highlights recent messages by General Authorities and General Officers of the Church.

From the worldwide devotional for young adults to council published in Church News to social media posts, Church leaders shared inspiration this week and many messages were focused either on the lessons we can learn from looking back as well as the vision we need to look to the future.

Speaking from the new Pioneer Center at This Is The Place Heritage Park in Salt Lake City, Utah, Elder Gary E. Stevenson and his wife, Sister Lesa Stevenson, shared lessons learned from looking back on the pioneers and how those lessons can help us achieve vision and balance.

Relief Society General President Jean B. Bingham met with US First Lady Jill Biden. Together the two discussed the importance of education, a blessing that shapes the future.

Here’s a look at what you may have missed this week from the pulpit.

Speaking to young adults around the world, Elder Stevenson and his wife, Sister Stevenson, taught how vision and balance can lead to spiritual strength and peace.

Sunday’s worldwide devotional for young adults began with Elder Stevenson sharing stories of the Church’s early pioneers and their need for vision. Sister Stevenson said those early Saints were “worn and tattered” and arrived in the Salt Lake Valley after fleeing “fierce persecution.”

Settling in the middle of “wide-open desert spaces” required those Saints to have a vision for more than what they could see in the first moments after their arrival. They had to see what was possible, she said.

Elder Stevenson said, “These faithful Saints would once again know peace and purpose, with an elevated gospel vision far higher than the mountaintops they climbed to reach the Salt Lake Valley.”

Read a full summary of Elder and Sister Stevenson’s remarks, including four components of proper balance, at Church News.

US First Lady Jill Biden visited Utah on Wednesday, May 5—interacting with students and teachers at Glendale Middle School and meeting with President Jean B. Bingham, General President of the Relief Society of The Church of Jesus Christ of Latter-day Saints.

“It’s a challenge, wherever we are, to make sure that every child gets the education that they need. Utah is one of the places that are really striving to make sure that that happens. I think this just gives it a little bit of a boost to emphasize how important education for children, youth and adults is in Utah,” President Bingham told the Deseret News.

She said she admires the first lady for her focus on education ”throughout her life, despite all the other things that have happened in her life. She could’ve said ‘I’m done,’ but she has continued to champion education, and so I’m impressed with her.”

Read more, including how President Bingham believes education should not be a political issue, at Church News.

By the Young Women General Presidency and advisory council, published at Church News

“A fountain of pure water” and “a thicket of small trees” (Mosiah 18:5)—Mormon used these words to describe the place where Alma hid after fleeing from King Noah. Those trees and that water became “beautiful . . .  to the eyes” of the people who joined Alma there. Why? Because in that place, Alma and his people “came to the knowledge of their Redeemer” (Mosiah 18:30).

The location of your Young Women camp—whether it is in a forest, in a park, on a beach, in a meetinghouse or virtual—can become beautiful to the eyes of all who gather there. Like Alma and his people, young women need a place where they can gather together, separate from worldly influences, to feel the Spirit of the Lord, grow in unity and love, and strengthen their faith and testimonies of Heavenly Father and Jesus Christ.

As preparations for Young Women camp begin, it is important to remember that youth camp leaders should have the primary responsibility for planning, directing and evaluating camp. They counsel with the Young Women presidency, ward and stake camp leaders and priesthood leaders.

Read more of what adult leaders can do to “shepherd the shepherds,” the youth camp leaders, in their planning and directing of camp at Church News.

Social Media Posts in Recognition of the National Day of Prayer

Our Heavenly Father can see things we can’t see. While we see mortal problems and pain, He sees our immortal potential and progress. If we pray to know His will, He will guide and help us along the way.— Russell M. Nelson (@NelsonRussellM) May 6, 2021