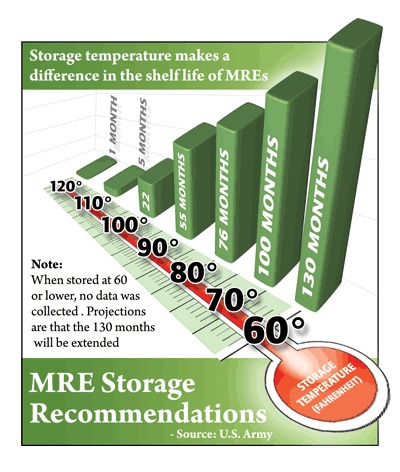 Originally designed for the U.S. government, these compact pouches contain delicious ready to eat foods. MREs have been used since the 1970's in the U.S. Space Program, Military, Forest Service and FEMA. In more recent years, many foreign governments have started using these versatile foods.

A main concern in the development and testing of rations for the U.S. government has always been shelf life. All MRE foods are packaged in triple-layer plastic/aluminum pouches that have better storage qualities than heavy cans, with no need for a can opener. The food in these pouches is precooked and sealed at a high temperature so that bacteria is neutralized. The food then will be shelf stable even when stored at room temperature. Some of the best information available on MRE shelf-life is the storage life chart compiled by the U.S. Army's Natick Research Laboratories. This chart provides a good overview and summary of the findings gathered from their testing of MRE products.