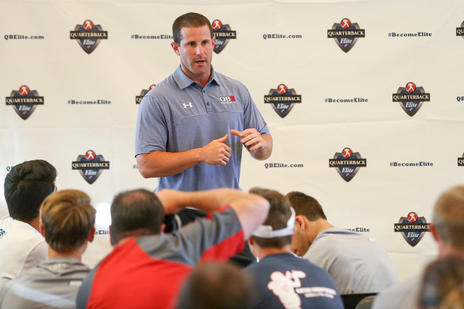 Max Hall's Journey from Addiction to Recovery: Former BYU QB Uses His Story to Help Others

“My advice to you guys is, when your buddy says, ‘Hey, let’s go smoke a joint,’ . . . yeah, it seems real cool at the time; I’ve been there," Max Hall shares. "But please don’t get caught up in that stuff. I can personally tell you it will ruin your life. Maybe not everybody, but if you have an addictive personality like me, it will. Just don’t do it because you just don’t know.”

Max Hall listened as his former coach recounted a story illustrating his toughness on the football field.

Former BYU quarterbacks coach Brandon Doman told a room full of high school quarterbacks and receivers about the last game of Hall’s collegiate career, which included a hit so hard that he bit through his tongue and tore the meniscus in his knee.

Not only did Hall rebuke his coach for asking if he was OK, but after he struggled back to his feet, he threw a touchdown pass the very next play that turned the game in the Cougars’ favor, Doman said.

Then Hall, the winningest quarterback in BYU’s history, stood and told the teenagers about the hit from which he wasn’t sure he could recover.