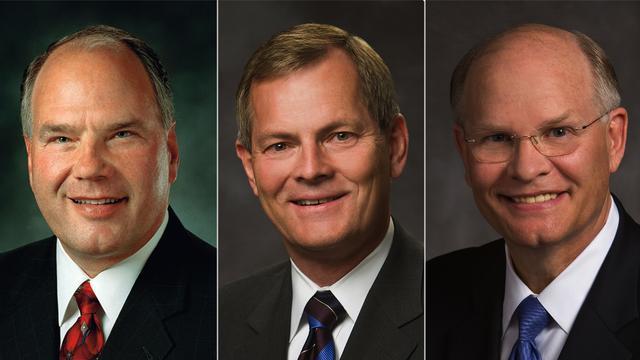 MR says: We are so excited to sustain our three newest Apostles. Here's a little background into their lives, as well as their testimonies of the Savior and His Church.

Elder Ronald A. Rasband: Prepared for a Lifetime of Service

Also check out 5 Things You Should Know About Elder Ronald A. Rasband.

Following the call issued this week by Church President Thomas S. Monson to serve as an Apostle of Jesus Christ, Elder Ronald A. Rasband said a New Testament scripture came to mind that night as he pondered and prayed about the new assignment. “Ye have not chosen me, but I have chosen you, and ordained you” (John 15:16).

Because he was the first of the three Apostles to receive his “call,” his place in the Quorum of the Twelve will reflect that seniority. Quorum members’ seniority is based on when they were called to service, not their age.

Elder Gary E. Stevenson: A Life of Constancy and Service

Also check out 5 Things You Should Know About Elder Gary E. Stevenson.

When (then) Presiding Bishop Gary E. Stevenson received a telephone call from the Office of the First Presidency on Tuesday morning, he thought “I knew it!”, and was certain he was being informed that one of his counselors would be called to fill one of the vacancies in the Church’s Quorum of Twelve Apostles. What followed was “a knee-buckling moment for me,” he said. “It was a very sweet, short experience with the First Presidency. It was not something that I had expected.”

Since that time, Elder Stevenson has drawn comfort from a scripture from the Doctrine and Covenants: “And whoso receiveth you, there I will be also, for I will go before your face. I will be on your right hand and on your left, and my Spirit shall be in your hearts, and mine angels round about you, to bear you up” (D&C 84:88).

That verse of scripture has been a pattern for the life of Elder Gary E. Stevenson, who was sustained on Saturday, October 3, 2015, as a new member of the Quorum of Twelve Apostles (Elder Stevenson, in seniority, is the eleventh of the twelve Apostles in the Quorum).

Also check out 5 Things You Should Know About Elder Dale G. Renlund.

On Tuesday, September 29, Elder Renlund received a completely unexpected call from the Office of the First Presidency, and was asked to come to the North Board Room in the Church Administration Building. “I didn’t know where the North Board Room was,” he laughed. He was welcomed there by President Thomas S. Monson and his two counselors. What followed was a very brief meeting, in which President Monson said “Brother Renlund, we extend to you the call to serve as a member of the Quorum of the Twelve Apostles.”

Elder Renlund immediately found himself without words. Says the former physician: “Wherever the sweet spot is between apoplectic and catatonic, that’s where I was.” He humbly accepted the assignment, and after a few minutes, found himself back in his office, where “I closed the door, and fell to my knees.”

The reaction of his wife, Ruth Lybbert Renlund, whom he married in 1977, was a source of great strength to him. “She was all in. When I called her, her life changed too.” In the hours that followed, they prayed together and received a witness that “God directed this course.”