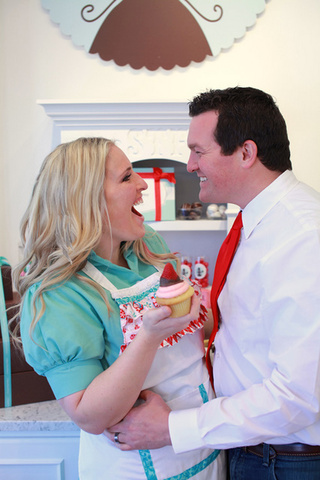 What’s it like baking 1,000 cupcakes in only two hours for celebrity rock stars? Piece of cake. Well, at  least it was for LDS businesswoman and cupcake extraordinaire Megan Faulkner Brown. Brown is the founder of The Sweet Tooth Fairy gourmet bakeshops, as well as winner of Food Network’s TV show Cupcake Wars.

"Having the opportunity to appear on Cupcake Wars was an incredible experience, and winning was absolutely surreal,” Brown says. “Participating in a competition like this really pushes you to draw upon your creativity, especially with limited time and with maximum pressure. It was truly a delicious adventure.”

Before competing on the show, customers kept asking Brown when she was going to appear on Cupcake Wars. It was their continuous nudging and prodding that led her to finally do it, despite the fact that a part of her wasn’t so keen on the idea.

“I thought, ‘Why would I knowingly put myself in this ridiculously stressful situation?’” She had seen an episode or two and always thought the bakers were crazy for willingly going through the madness of baking a thousand cupcakes in two hours.

She had started the application process several times but never felt the gusto to finish doing it. But one day, Cupcake Wars actually reached out to The Sweet Tooth Fairy and encouraged Brown to finish applying for the show, which she finally did. She soon received the news of her acceptance and was off to LA to film the episode.

For those who are new to Cupcake Wars, here’s how it works: Four bakers compete in three rounds of cupcake challenges, one baker getting eliminated at the end of each round. Two final bakers compete in a showdown of baking 1,000 cupcakes and creating a display in only two hours. The winner receives $10,000 and, for this particular episode, got to serve their cupcakes at the Los Angeles premiere for the hit musical Rock of Ages.

“It was one of the most challenging experiences I’ve ever had,” Brown says. “There’s nothing you can do to really prepare for it.”

With the exception of being prepared with baking skills, there are many other factors that make it impossible to train for Cupcake Wars—the clock, the pressure, the cameras, the judges, the ingredients—all combined are a recipe for absolute stress and mayhem that no baker has ever experienced.

“When you get there, they try to prep you for the contest, but they start the clock and you just go. I thought, ‘What just happened?’ because it just happens so quickly. To me it’s weird that people would ask why it’s so challenging.”

In the first round, the bakers were given a buffet of food that might be found in a rock star’s dressing room and had to create a cupcake using those ingredients in only 45 minutes. One ingredient on the table this Mormon mom wasn’t too familiar with: alcohol.

“I told the producer after the show that I had never drunk alcohol. It was interesting because [for the first round] there was beer, tequila, and wine.” But Brown managed to whip up an impressive Cranberry Wine and Brie Cheesecake cupcake that had the judges salivating.

She continued to impress the judges in the second and third rounds with her Nutella Crepe, Crème Brulee, and Sweet Potato Pie cupcakes and ultimately won the war.

Homeschooled Baker
A self-taught baker, Brown refers to herself as homeschooled in the ways of the kitchen.

“I was practically raised on the kitchen counters of my grandma and my mom,” Brown says. “As I reflect back on my childhood, I feel like my mom always allowed me to be involved. . . . From an early age, [baking] always resonated with me.”

It was in these kitchens that she learned the color of a perfect chocolate chip cookie, the consistency a brownie should be when it comes warm out of the oven, and even the ideal texture of the crest of a golden cupcake. “Baking would be my canvas if I were an artist,” she says.

Another lesson she learned from her mother was the integration of food and motherhood. “My mother taught me that part of her job as a mom was to nurture us, and one of the primary ways was to bake and to cook for us,” Brown says. “It was one of the ways she manifested her love for us.” Brown feels the same philosophy goes for her and her children as well, as the kitchen is the main hub of her family.

As the mother of four young children, Brown now balances life as a busy mom and a successful businesswoman—a balance she’s still striving to perfect. She says that as a working mother, the feeling of guilt occasionally creeps up on her when she is not at home with her children, but she knows she is doing what’s right for her family in her particular situation.

“In our [LDS] culture, there’s obviously an ideal situation, and I think that it’s always worthy to shoot for those goals,” she says. “As women, we are naturally wired to be the nurturers. So for me, because Heavenly Father made us that way, there will always be this struggle of ‘Am I doing the right thing?’ I feel like for me and my family right now, we’re absolutely doing the right thing. That doesn’t mean I don’t have my days.”

To get through her hectic days filled with carpool, cupcakes, and bottom lines, Brown often finds herself turning to prayer for extra help and encouragement.

“Knowing that Heavenly Father is there to hear all of my crazy prayers, I feel like that’s where He kind of balances it out.”

Sweet Success
After spending years in the kitchen and developing a true love for sweets, Brown decided to open up her very first bakery in Provo, Utah, in 2009. She jokes that all her husband had to do was say, “Nah, that’s not a good idea,” and they could have been living a simpler life, but now she is so happy that he supported her in her decision to become the Sweet Tooth Fairy.

Her vision for the bakery was not only to sell sweet treats but to create a family-friendly place for bringing people together. From the moment you step into The Sweet Tooth Fairy, you feel transported—Frank Sinatra is crooning in the background, black and white pictures of children eating cupcakes hang on the wall, and the jeweled display case is a throwback to a ’50s diner. She says her goal is to create a timeless, nostalgic kind of place—a reminder of simpler times that everyone can relate to, whether they’re five years old or 85 years old.

“I know people don’t need cupcakes to survive, but it provides a comfort. Yeah, we sell delicious desserts, but we really sell memories. I’m hoping that what I’m doing here is providing a place where people can come to make those memories,” she says. “My dad always taught us that at the end of the day, memories are all you have, and with his passing, I realized it was true. It’s the memories and the relationships you have with people that really matter. That’s why I have all of [my stores]: because I want to have people come in here with their sisters when they’re visiting from out of state or bring their kids for a date night. For me, it’s not just about the treats; it’s about so much more than that.”

One of her favorite parts of working as a baker is the experimentation with flavors. As her business grows, Brown is always looking to create new and tasty treats for her customers.

“I get a lot of my inspiration for flavors from combinations that already exist and that people already like,” Brown says. For example, the Nutella Crepe cupcake is loaded with chocolate, cream, and berry flavors; it tastes just like the French dessert. “For me, this is the fun, creative part.”

Brown’s cupcake business has been so successful that she has opened a total of 11 shops in three different states and plans to continue growing. Her sweets have been featured in Martha Stewart Weddings, on the Rachael Ray Show, and on many other national media outlets.

This Cupcake Wars champ, dessert fairy, and Mormon mommy is doing it all and coming out on top. And she will tell you, victory is sweet.

People Desserts Our World People Motherhood BusinessDesserts,Our World,People,Motherhood,Business,People
Comments and feedback can be sent to feedback@ldsliving.com