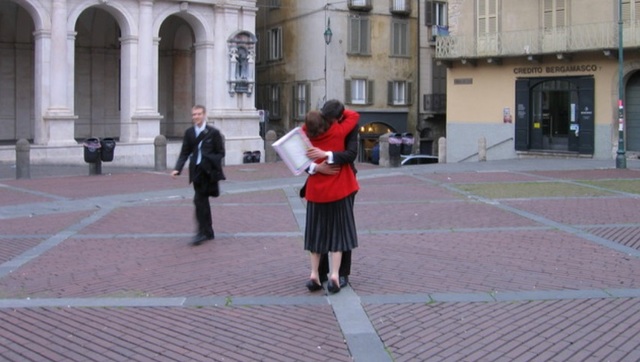 Methodist Mom: How My Son's Mormon Mission Changed My Life

Toward the end of his sophomore year at BYU, Harry announced that he was submitting his mission paperwork. A knot formed in my gut, but I respected his decision.

When the assignment letter came, we gathered 25 people in our living room to watch Harry rip open the envelope. As he read aloud, we learned he was headed for northern Italy: the Milan mission.

I choked out a little cheer as my core became warm. I was certain this was a personal blessing from God to me. I had so feared a third-world assignment. My grandparents’ homeland of Italy was familiar to both Harry and me. I’d been to Italy many times, and we’d done two family trips: one to Venice and one to Rome. I was confident that the (mostly) warm Italians would (mostly) cradle him, and I was sure he would be fed abundantly.

On a gray September day in 2006, “we” reported to the Missionary Training Center. That morning, I wasn’t the emotional mess I expected to be. I was numb. I had discouraged my husband from coming because I was afraid of how I’d react, and for some reason I thought it would be better for him to not see me fall apart. But I wished he were there to share the experience with me. This regret will stand as one of my life’s major mistakes.

The speeches at the MTC were funny and upbeat, but despite the light tone, I could look around and see by the tissue proliferation that I wasn’t alone in my sadness. When it was time to separate from Harry, I grabbed his hands and held on tight until I absolutely had to let go, finger by finger. Then I simply watched him walk away.

Back in Maryland, my numbness gave way to a sobbing mess, then mild misery. Sometimes I would call Harry’s name in the house, pretending he was in his room. While walking the dog, I’d feel a warm breeze and imagine it continuing across the Atlantic to touch his cheek.

But I had felt something powerful at the MTC, and when I returned home, I told Chuck that for the first time I wondered how this church could not be true. He was more than a little shocked. I had said early on in our experience with Harry that although I had not objections to the Church for my son, becoming Mormon would never be for me.

Throughout the two mission years, Harry and I exchanged long weekly e-mails, but phone calls were only allowed on Christmas and Mother’s Day. As I missed him more and more, I vowed to try to see him.

Mission presidents cannot prevent parents from seeing their children, but most missionary parents are Latter-day Saints who are familiar with the policies. Being a nonmember gave me the nerve to ask—repeatedly.

Each time I wrote, I received a compassionate call from a mission president who told me why parental visits were a bad idea. It could distract my son and put him off balance. It might affect other missionaries who would wonder why they couldn’t see their parents as well. Although I listened, I couldn’t ignore my overwhelming drive to see my son, and ultimately, I was granted permission.

We met in Bergamo in the midst of an Italian vacation with Chuck. Harry brought seven other missionaries to join us for gelato. I cried with guilt when I saw their sweet, smiling faces and told them I hoped my presence did not upset them. They all insisted they were happy to meet me and understood my struggle with the separation.

“It was such a wonderful thing to see you,” Harry e-mailed later. “I miss you,” he wrote, “but I know where I am supposed to be.”

I learned that though time does pass, it does not necessarily fly. The cherry blossoms bloomed, vibrant gold leaves fell off the trees, and snowdrifts piled high. Finally, two years came to a close. I readied his room: I hung new posters of places he’d served, charged his cell phone, and opened the windows to let fresh air blow the emptiness away.

Our reunion came at Dulles International Airport, where my 22-yearold ran into my open arms and embraced his dad, stepdad, and family and friends who could be there.

Harry made up for lost sleep by napping whenever he could, but he got up to make appointments on time. I should not have been surprised at this new sign of maturity, but I was. Listening to him speak on the phone in flawless Italian gave me deep joy, reminding me of my grandparents speaking it around the house during my childhood.