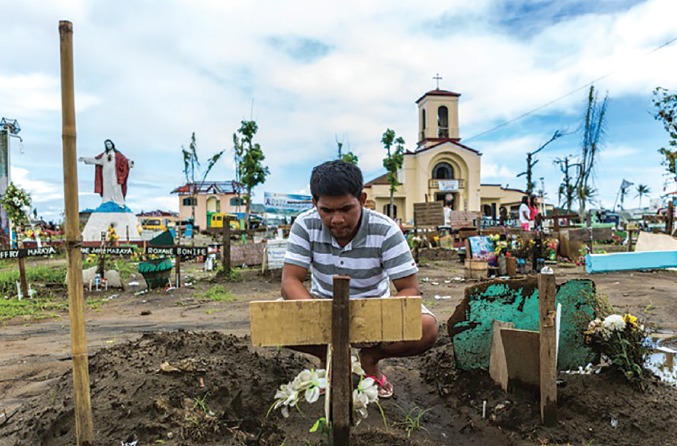 Natural disasters are nothing new to the Philippines or the people who live there, but two massive disasters last fall resulted in overwhelming tragedy. Just one year ago, on October 15, 2013, a 7.2 magnitude earthquake, the strongest felt in the central Philippines in 23 years, caused severe damage in Bohol and the surrounding area in Cebu. The quake killed more than 200 people and rocked the lives of over 3 million others.

But even as thousands of volunteers and mountains of supplies poured in to help the quake survivors, one of the strongest tropical cyclones ever recorded started to form offshore. With minimal warning and time for preparation, typhoon Haiyan ripped through the central Philippines on November 8, 2013, hitting the city of Tacloban especially hard, leaving thousands dead, injured, homeless, jobless, and penniless.

Though all 205 full-time missionaries from the Tacloban mission survived the brunt of the storm, at least 42 LDS Filipinos did not.

One couple in particular shares a harrowing story of living through Haiyan. Dexter and Angel Bendoy were only engaged at the time the storm hit. “A day before the expected arrival of the typhoon, the leaders told all the members to evacuate to the chapel,” Angel recounts. After her family was gathered in the chapel, she assisted the missionaries in gathering others to safety.

Her fiancé’s family did not expect the storm to be very strong and decided not to join Angel and the other members in the chapel. Early the following morning, the wind picked up. The roof of the chapel tore away to expose the nearly 200 people huddled in the small room. The wind quickly obscured their vision as they attempted to protect themselves and one another from flying debris and shattered glass. Miraculously, just as a small group of members began praying through their tears, some plywood from the broken ceiling provided them with some protection.

When the winds finally died down and the little group left the chapel, Angel anxiously tried to make contact with her fiancé, only to discover that he was the sole survivor of his large family. In a matter of hours, thousands like Dexter had lost everything. Angel recalls her first visit to her fiancé, a week after the typhoon: “The smell was unbearable because of the decaying bodies. It took maybe 30 minutes of walking to get to Dexter’s house. I saw his wounds, and he was totally miserable. He told me that it was really painful to him that he wasn’t able to save his family.”

It is estimated that around 15,000 people found refuge in 200 chapels scattered throughout the storm’s path, and over 6,000 Filipinos perished at the hand of Haiyan while over 4.1 million were displaced.

Standing Strong Against the Winds of Adversity

Still recovering from these tragedies a year later, the Filipino members press forward, learning new skills, slowly rebuilding, and increasing their Church activity. In the weeks after the storm, Origines remembers seeing many arrive at church in shorts—the only article of clothing they had left—and openly weeping over the sacrament prayers.

Public affairs missionaries from the United States Elder Michael Morello and his wife, Pauline, remember that time and now affirm, “The people of the Philippines are very resilient and have experienced many physical disasters, and yet they stay generally positive, upbeat, and pleasant. It is not uncommon to see smiles on everyone’s faces and pleasant welcomes everywhere you go.”

From the ashes of the earthquake and debris of Haiyan, stories of strengthened faith and miracles are nearly as plentiful as the tales of tragedy. Church attendance increased as both members and nonmembers took a greater interest in those Saints who had helped them. Other areas increased their fast offerings or worked to gather clothing, food, and other supplies.

Even Filipinos not of the LDS faith witnessed miracles. A cab driver in Cebu told Ticong that he was “so amazed over the figure atop our temple [angel Moroni], for even during the billowing surge of wind, it was still there.” He had expected more severe damage from the two storms and noticed the steadfastness of the temple.

And the members are just as stalwart as the angel Moroni. Member Maria Evelyn Quilla-Soleta proudly but humbly states: “Filipinos are a brave people. Nothing can stop them from getting up, taking out their brooms, and cleaning up after the storms and earthquakes. And they can always put on a smile, no matter what!”

For the Bendoys, life is still uncertain. Dexter and Angel were married in the Cebu Philippines Temple on February 20, 2014. Though Angel admits that they still don’t know where to begin starting over, she also shares a testimony that echoes the faith and humility held by the faithful Filipino Saints: “We are just holding to the thought that we are guided by our Father in Heaven. We know He will help us surpass the trials. The lesson that we learned is to follow His plan, because everything will fall to its proper place. We know that with Him we can make the best out of the worst situation.”

Photo from the Brown Bamboo project.

Filipino native Joseph Bornilla was living in the United States when typhoon Haiyan wreaked havoc on his home country. The photography student immediately bought a ticket back to the Philippines where he spent his Christmas and New Year holidays documenting in pictures and stories the lives of the survivors in Tacloban. Bornilla says he “found beauty in the chaotic scenes of destruction” and compares the Filipino survivors to bamboo, which can “withstand each storm, sway left to right amidst the strong whirlwinds, and at the end of the day, will stand . . . brave and resilient.”

Bornilla is sharing many heartbreaking but inspiring stories like Dexter’s for the first time in an attempt to help these survivors. Through sales of his book, Brown Bamboos, a 2015 calendar, and a documentary, Bornilla hopes to gather donations to be used for basic needs of those still suffering, such as food, hygiene supplies, and medicine. He plans to travel back to the Philippines at the end of 2014 to personally distribute all donations he receives. Visit www.josephbornilla.com for more information about Bornilla’s projects, or to donate.