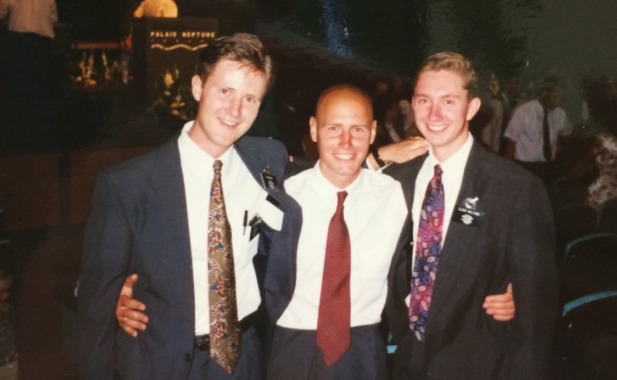 “You reach a certain point in your life (when) you think, ‘What have I done with my life so far?’” returned missionary Jeremy Beck said. “When I heard how the story played out over the subsequent 15 to 20 years, I thought, ‘Wow, I made a difference in someone’s life.’”

Vladimir Bevziuk journeyed to France early in 1995 in search of work. He hoped to improve the quality of life for his wife and 6-month-old daughter in Ukraine. In the end, he did, but spiritually rather than financially.

In addition to changing his life and the life of his family, Bevziuk changed the lives of the people in his hometown of Vinnytsia, Ukraine.

Bevziuk first arrived in Paris, where he trained to be in the French militia. Upon learning about his family, the militia rejected him. Discouraged, Bevziuk boarded a train to Marseille.

In Marseille, Bevziuk found work selling the Macadam Journal, or the “homeless newspaper.” People who had fallen on hard times sold the French publication in order to get back on their feet.

While selling this paper on a spring day in March, Bevziuk spotted a small group of young men and young women. They were unlike any Ukrainians or French people he had ever seen. Bevziuk described them as having a light that lit them up from the inside.

Bevziuk wanted to meet these young people and to be like them, to have that light inside. He wanted to be different the way they were.

He asked a passerby who these people were. The passerby answered they were Englishmen. Intrigued, Bevziuk approached them.

The young people weren’t Englishmen. They were American missionaries with The Church of Jesus Christ of Latter-Day Saints. Bevziuk spoke with two missionaries named Benjamin Wolford and Jeremy Beck.