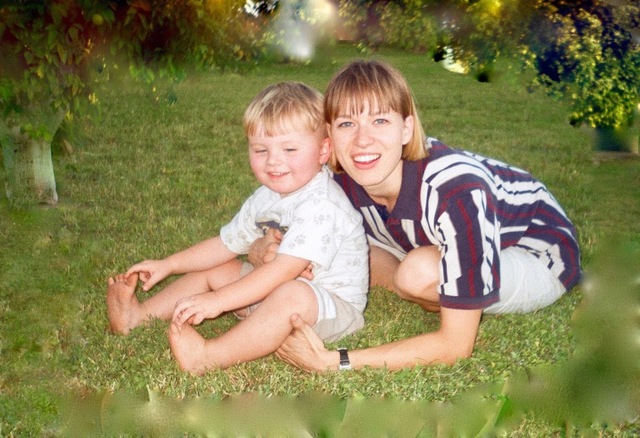 I never expected I would be the mother of a child with disabilities, let alone two children with disabilities. But sometimes life detours have a way of teaching us things Heavenly Father knows we need to learn.

Our second son, Nathan, was diagnosed with autism at age 4. That day I felt like the dreams I had imagined for my sweet Nathan had been dropped and shattered into a million pieces. I physically felt at the time that my heart had been crushed as well.

Some of my grief was for him. He would never play sports, go to prom, go on a mission, or raise a family in this life.

Some of the grief was for me. I had never envisioned my life raising children with disabilities. I grieved the “normal” child I had created in my mind whom I would never raise. I didn’t realize I would go through all of the phases of the grief cycle, similar to when you lose someone close to you, but I did.

I remember asking my husband, Justin, to lay his hands on Nathan’s head and heal him by the power of the priesthood. I knew with God’s power he could be made whole, and I had faith it could be done. But Justin told me as he prayed he felt this wasn’t what the Lord wanted.

I am embarrassed to admit I was angry. I was angry at the diagnosing physician, at God, and at my husband (for not having what I perceived to be the “faith” to give him a blessing of healing). Of course, I felt guilty for feeling angry with God because I didn’t understand that anger was part of the grieving process I was going through.

The good news is Heavenly Father is big and strong enough to patiently work with people like myself, even if I was super angry at Him. He was patient with me as He helped me learn a little more about what having true faith really means. 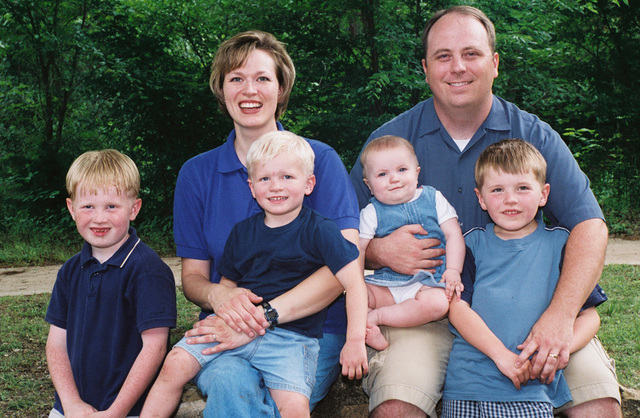 As I was getting through the grief of Nathan’s diagnosis, our next son, Jacob, started showing signs of autism. At first, I hoped Jacob was just mimicking Nathan’s autistic behavior. Then, I rationalized his speech delay because he had ear problems (denial). Slowly it dawned on Justin and I that Jacob was on the autism spectrum, too.

My heart broke all over again and I began to wonder if I just wasn’t faithful enough to have my sons healed.

At the time when my husband and I were realizing Jacob was also on the autism spectrum, I heard a great talk by Elder Dennis E. Simmons during general conference. His talk gave me a new perspective on true faith and helped steer me on my path to personal growth and happiness.

Elder Simmons related the story of Shadrach, Meshach, and Abed-nego from the Old Testament. I remembered the story from my youth: Daniel and his three faithful Jewish friends were taken from their homes in Jerusalem when it was besieged by the Babylonians. King Nebuchadnezzar later issued the decree that all people should bow down and worship his idols. Shadrach, Meshach, and Abed-nego refused to bow down. The king told them if they did not, he would have them thrown into the fiery furnace.

I love the response they gave King Nebuchadnezzar in Daniel 3:17-18:

“If it be so, our God whom we serve is able to deliver us from the burning fiery furnace, and he will deliver us out of thine hand, O king.

"But if not, be it known unto thee, O king, that we will not serve thy gods, nor worship the golden image which thou hast set up.”

This concept hit me like a ton of bricks. I had always thought if I was good and faithful enough, God would take away this trial and heal my boys.

And so I had to ask myself the very hard question: If Heavenly Father didn’t heal my sons, would I still believe? Would I still trust His eternal perspective, or would I just give up on Him?

That might be easy to answer when life is going along beautifully. But when things aren’t going the way you wanted or hoped, submitting to God’s will is very difficult. It is bitterly hard.

Well, the story of Shadrach, Meshach, and Abed-nego ends happily. God did indeed save them in the fiery furnace. In fact, when they were thrown into the furnace, the guards saw “four men loose, walking in the midst of the fire, and they have no hurt; and the fourth is like the Son of God” (Daniel 3:25).

In the midst of their trial of faith, Shadrach, Meshach, and Abed-nego came to know God—literally.

His words seemed to pierce directly into my soul. It finally dawned on me, I didn’t understand what true faith was yet.

I also realized I didn’t have the faith to say, “I know you have the power to heal my boys, but if not, I will be okay.” I didn’t feel that way. I still really wanted my boys healed. I wanted my will, not His will.

Please God, it would be easier if you just healed them!

Yes, it would have been easier, but I wouldn’t have learned what I needed to learn. This talk taught me I needed to change, but I didn’t know where to begin. 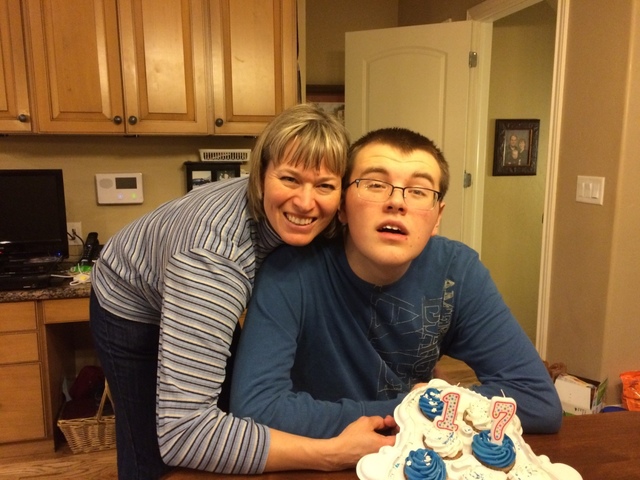 After general conference that year, I was reading in the Book of Mormon and the words of Alma taught me my next step. In Alma 32:27, Alma teaches if we can but “desire to believe,” Heavenly Father can help us plant the seed of true faith.

So, I told Heavenly Father I desired to reach the point with my faith where I could say, “Thy will be done,” because I wasn’t there yet.

The great thing about our loving Heavenly Father is He takes us wherever we are and helps us begin our journey toward accepting His will. If we don’t have the desire to say, “Thy will be done,” we can pray for the desire and He will help us begin.

In prayer, I continued begging Heavenly Father to help me. I was broken. I was in despair. I was burdened beyond what I could handle with my two sons on the spectrum and two other children who needed my help.

I needed Him. I needed His help, through years of poor sleep, behavior challenges, extended years of potty training, and all the other challenges that come with these special needs kiddos.

I knew Heavenly Father had an eternal perspective, but it was very hard for me to have an eternal perspective when all I could remember was life on earth. I knew I needed to have faith that He could see the end from the beginning and that all these challenges would work together for my good.

My every moment seemed to be a prayer to God that He would help me survive and change my heart to mirror His will—even if it didn’t include healing my boys.

Lesson 3—The Burden and the Yoke

My third lesson came more slowly. I knew if I wanted to know and understand God’s will, I needed to be learning about it—at church and at home in my own personal scripture study. (Confession: it was awfully hard to get anything out of church with my rowdy children and even harder to find a moment of peace to read my scriptures personally).

I knew I needed to prioritize and do these basic things so I could put myself in places where God could teach me and change my heart.

While studying the scriptures, I found a verse I had read many times but suddenly took on added meaning. It is found in Matthew 11:28-30, and it reads:

“Come unto me, all ye that labour and are heavy laden, and I will give you rest. Take my yoke upon you, and learn of me; for I am meek and lowly in heart: and ye shall find rest unto your souls. For my yoke is easy, and my burden is light.”

Now, it may seem counterintuitive to take on an additional burden when we feel like we can barely make it one moment to the next. But we have to remember this is Jesus Christ speaking—the Creator of heaven and earth, the Calmer of troubled seas, the Healer of broken hearts. If we are yoked to Him, like two oxen are yoked together, then we can pull a heavy burden—our heavy burden—more easily. 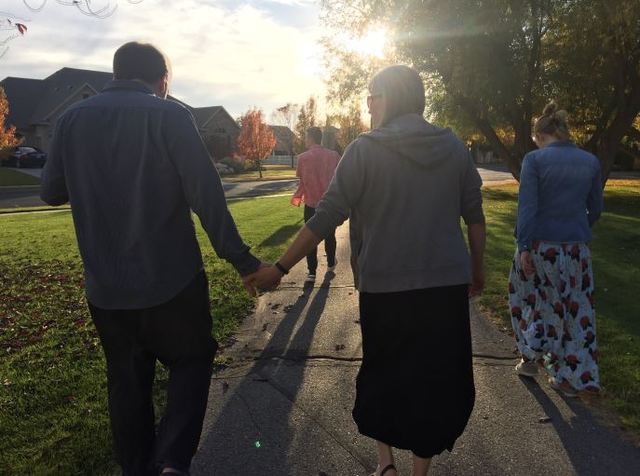 Additionally, it was Jesus Christ who gave us the perfect example of submitting to the will of the Father. He, too, was given a heavy burden He didn’t feel strong enough to bear.

“And he went a little further, and fell on his face, and prayed, saying, O my Father, if it be possible, let this cup pass from me: nevertheless not as I will, but as thou wilt” (Matthew 26:39).

So, I learned if I yoked myself to Jesus Christ, He could help me with my burden, which was so heavy it seemed the cart I was pulling was broken. This is one of the reasons why Heavenly Father sent Jesus to earth: “He hath sent me to bind up the brokenhearted” (Isaiah 61:1) and the broken-carted.

And so, I took Christ’s yoke upon me. I attended church each week—even though my children were awful and hard. I decided to make time every day to read my scriptures—even though sometimes it was only a few verses.

I knew I needed Jesus and His strength to make it. I wasn’t strong enough on my own.

Soon afterward, I found another verse of scripture which became my mantra. It is found in Philippians 4:13, “I can do all things through Christ which strengtheneth me.”

And I found it to be true. I was doing it. I was making it through challenging moments on a daily basis. I was learning tips and tricks on how to help my children with autism learn and grow, even though it was painstakingly slow. I was a little more patient as I leaned on my Savior and He carried me in and through difficult days and nights that turned into years.

Soon after I coined the phrase, “Two people can do anything if one of them is God.”