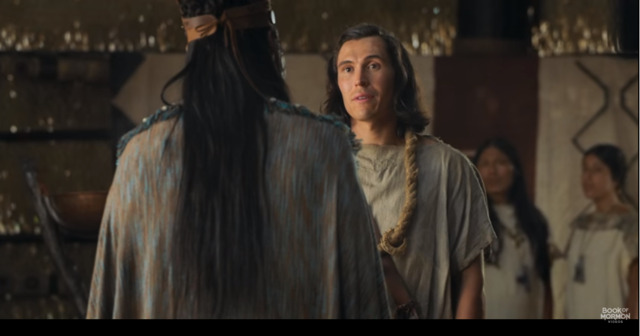 More Than a Warrior: A New Look at the Story of Ammon in the Latest Book of Mormon Video

Have you ever become known for something even though it was only a small part of what you've done in your lifetime? After watching the latest Book of Mormon video, I wonder if that is how Ammon the missionary would feel about being known as “the guy who cut off the arms."

As I watched the beautiful portrayal of the story of Ammon and King Lamoni, I gained a few insights about this courageous missionary and other members of this story.

1. Ammon might not have been as immediately accepted by King Lamoni as it seems.

Maybe it’s just me, but when the king offers to have Ammon marry one of his daughters, it always felt like the ultimate sign of approval. But after watching the way Ammon and King Lamoni interacted in this portrayal, it occurred to me that the king's invitation could have been more of a test than an offer of acceptance—almost as if King Lamoni was testing to see exactly how committed Ammon was to live with the Lamanites. A marriage between Ammon and one of the king's daughters would be a pretty significant commitment to live among their people. After Ammon politely declined, the next greatest test of commitment seems to have been the riskiest job for Lamoni's servants—tending the sheep.

Ammon did earn the king's trust after fulfilling all of the assignments he had been given and defending the king’s property. These acts of sincere service and dependability are what opened King Lamoni's heart to hear what Ammon had to say.

2. Ammon was not a warrior.

Even though Ammon’s impressive fighting at the waters of Sebus makes him seem like a tough warrior who presented himself boldly before the king and had great skill in fighting, as I watched the whole story of Ammon and Lamoni, I was reminded that Ammon was, first and foremost, a missionary. He and his brothers had been very involved in Alma the Younger’s conversion. They knew what it was like to be far from the gospel, and they wanted to share the joyful message of the Savior that they had discovered.

In this video, I was surprised to see Ammon portrayed as more soft-spoken and reflective than I had pictured him growing up. He always acted with the intent to do what was right and to bring others to Christ, from the time he was taken prisoner to the time that he read King Lamoni's thoughts and began teaching him the gospel.

3. Ammon met the king where he was in his gospel knowledge.

It is a touching moment in this video when King Lamoni assures Ammon that he sincerely wants to learn more about the gospel. And yet, Ammon recognizes that because of the lack of gospel records and the false teachings that had been passed down through generations of Lamanites, King Lamoni has only a vague concept of a “Great Spirit” and no real understanding of God or heaven. As King Lamoni asks where heaven is, it struck me just how little he did know, and how profound it was that Ammon started to teach him from the Creation story.

It was a beautiful visual reminder of Ammon’s wisdom and Christlike love. He recognized what the king did and didn’t know and adapted his teaching to the king’s pace, sincerely wanting the king to understand soul-saving truths that he had spent time learning since his own conversion.

While there are many other insights we can learn about Ammon in this video, he isn’t the only person you can learn about! Check out “Ammon Serves and Teaches King Lamoni” for some unique perspectives on King Lamoni and his wife, the other servants who tended the sheep, Abish, and the members of King Lamoni’s kingdom, who (spoiler!) actually didn’t all have the same conversion their king did.