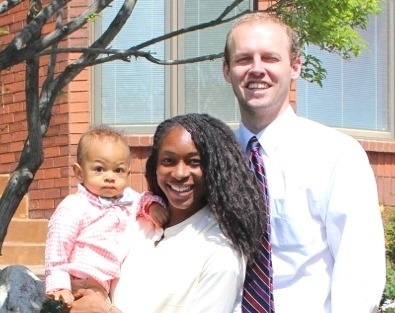 Swedish-born Mormon track star Fatima Dedrickson had it all—four years of competition with BYU under her belt, a temple marriage, and a baby on the way. But after her son, Noah, was born in 2013, Dedrickson felt that continuing in sports wouldn't be an option. But thanks to a supportive husband, a lot of faith, and a passion for the sport, Dedrickson overcame her concerns and was back on the track within a month of becoming a mother.

Fast-forward to February of this year. Dedrickson surprised herself by not only getting third place in the Swedish Nationals, but also setting a personal record of 8.47 in hurdles. Motherhood hadn’t slowed her down one bit. “I felt like I was faster and stronger than I’d been pre-baby!” she says.

Some days are harder than others, but everything fell into place for Dedrickson to both raise a child and race. Now that she’s graduated, she runs for the Swedish Hammarby Sports Club, but continues to train at BYU under Coach Grossarth. “He has worked me,” she laughs. “I try to get out of things but he never lets me.” Dedrickson’s specialties are the 100 hurdles and 100 or 200 meter sprints. Now her sights are set on the European Athletics Championship in August of this year.

“I love competing,” says Dedrickson. “I love it. After I had Noah I was thinking ‘there’s no way I’ll have time’! But once I committed, I just thought ahead to the competitions. I love track, and I love competing. You get to show your potential and see what you can do. There’s nothing better than seeing how you improve and seeing the results of all the hard work you’ve put in.”

Dedrickson is backed by friends and family both in Utah and in Sweden. Her parents and siblings still live in Stockholm, and are able to help out and offer support when Dedrickson, her husband, and their son visit for competitions. Dedrickson has a lot to thank her parents for, not the least of which is her love for track. They got her started in the sport at the age of 8, after a teacher insisted they find a good outlet for Dedrickson's boundless energy.

Her husband, Benjamin, is her biggest fan. When she was uncertain about going back to training, he was the one who encouraged her. “He said I had talent given from God and I’d put in so much work,” says Dedrickson. “If he hadn’t been so supportive, I never could have done it.”

Most of all, Dedrickson is grateful for the Lord’s hand in her life. The Church is small in Sweden, and meets and practices were often held on the Sabbath. But Dedrickson has seen the blessings of keeping the Sabbath Day holy. Not only has the Lord made it possible for her to raise a family and compete, her coach also changed her schedule so she wouldn’t have to train on Sundays.

“It’s been perfect,” says Dedrickson. “Things have really worked out as they’re supposed to.”

Follow Dedrickson's progress as she trains for the European Athletics Championship, and show your support at lesdedrickson.blogspot.com!