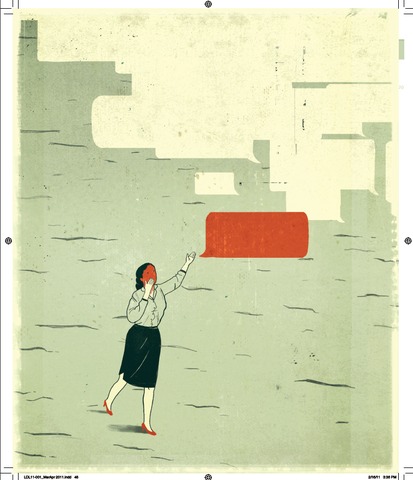 Electronics at Church
Some members have embraced the new wave of smart phones and iPads, using these devices to store scriptures, manuals, and other LDS apps. (Many of our readers shared how these devices have blessed their lives, engaged their families more in the scriptures, or saved them from the arthritic pain of carrying heavy scriptures.) Others, including some bishops and stake presidents, insist that scriptures are not scriptures unless they are made of paper and bound in a book. So are electronics appropriate at church?

LDS Living Facebook friend Monica Brackner Talley writes, “In the past six months I have used a smart phone instead of carrying a big heavy tote of scriptures and manuals. But I see many [who are] distracted by people sending messages and looking on the Internet.”

Similarly, Facebook friend Diane Crofts comments, “I don’t mind if [these devices] are for reading scriptures, but I dislike it when I see people answering and sending texts or e-mails during church. [It’s] very disrespectful.”

The general consensus is that using electronic devices in church is acceptable, as long as the people using them are focusing on the topic at hand. If you can’t resist the urge to shoot off a text or play a round of Angry Birds, then stick to the classic form of scriptures and manuals instead.

Leaving Meetings Early
General conference. Stake conference. A large fireside. There are plenty of occasions when we know that after receiving spiritual enlightenment we can be snarled in traffic for what seems like an eternity. At LDS Living, it has been our observation that sneaking out before the closing prayer to beat the rush has become commonplace, but it is still unacceptable. One of our staffers remembers attending a BYU devotional where one of the brethren chastised students who headed for the exits during the closing hymn. “Where are you going? The meeting is not over,” he declared. So unless you have a true emergency, stay seated until after the closing prayer, and have a little more patience with your fellow drivers.

LDS Living Facebook friend Amy Wilson Marshall writes, “We moved to a large ward a few years ago and still struggle to find a place each week. . . . What I find most frustrating is when the ‘campers’ sit right in the middle of the chapel so a large family like mine has to squeeze into two short rows. In our ward . . . they show up fifteen minutes early, leave their scriptures on the pew, and go into the hall to socialize. Very frustrating for a mother of seven!”

It’s true that most of us like to sit in the same area, if not the same row, each week. But Facebook friend Brittney Meyer McOmber thinks we should “mix it up.” She writes, “None of us own a pew and [we should not] get upset if someone is sitting in the place that we [typically] sit in. Sometimes due to disabilities, people do need to sit in certain areas. But most of the time, that isn’t the case. It’s fun sitting in different places every week!”

If you enter the chapel to discover that someone has taken “your” seat, simply find another seat nearby. There are very few circumstances we can think of where it would be appropriate to ask someone to move.

For all you seat savers out there, do so in moderation. When saving seats at a movie theater, a general rule of thumb is one person should not save more than two seats. We think this is a good rule for church meetings as well. Whether at the movies or at stake conference, it’s frustrating for others who have arrived early to discover one woman and her jacket spread out in a desperate attempt to claim an entire row.

The reason for etiquette is so you don’t detract from who you are as a person,” says Anna King. Instead of being distracted by the negative, she says, “etiquette allows people to see the positive things about you.”

Everyone wants to make a good impression—and by being aware of certain codes of conduct, we can achieve the desired results. But remember that etiquette is a two-way street. When others make a social misstep, be slow to take offense. Most of us are doing our best to navigate a rapidly changing world. With patience and understanding from one another, we can all do so with a little more grace.

Lds Life Technology MediaTechnology,Media,Lds Life
Comments and feedback can be sent to feedback@ldsliving.com