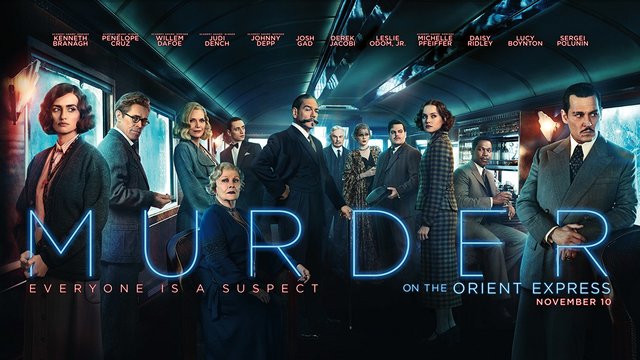 Mormon Moviegoers: What Parents Need to Know About "Murder on the Orient Express" Before Seeing It with Their Family

If you were born before 1985 you probably remember the mystery movie Clue! My sister Summer and I watched that movie on repeat growing up. (Both our parents worked.) It always stood out to me as the quintessential murder mystery film. Clue now has a new contender for that title in Murder on the Orient Express.

What starts out as a lavish train ride through Europe quickly unfolds as a stylish, suspenseful, and thrilling mystery. Murder on the Orient Express tells the tale of thirteen strangers stranded on a train, where everyone's a suspect. One man must race against time to solve the puzzle before the murderer strikes again.

Kenneth Branagh takes the reigns to star and direct this suspenseful thriller. You likely will recognize him from his role as Professor Gilderoy Lockhart from Harry Potter and the Chamber of Secrets, this summer’s Dunkirk, and a host of Shakespeare films. The all-star cast also includes Penélope Cruz, Willem Dafoe, Judi Dench, Johnny Depp, Michelle Pfeiffer, Daisy Ridley, and Josh Gad. Everyone is wonderful in their roles.

Murder on the Orient Express is based on the book of the same name by Agatha Christie. I have never read the book or any of Christie’s novels. My opinion is based solely on the film as an independent work of art.

I am adamant that great movies get you to feel something. Even action-comedies like Thor: Ragnarok get you to feel excitement and humor. The cinematography and beautiful European vistas had me wanting to call a travel agent and book a train ride across the Alps (hopefully one with less murder though). As the story unfolds I felt a genuine desire to try and crack the case as I tracked every suspect with their possible motives and alibis.

Even until the very end I was questioning everything. I was actively participating in the movie. There are no cheap twists that come out of left field, everything flows in a natural progression.

Kenneth Branagh is a delight on the screen. His portrayal of Detective Hercule Poirot was unique and interesting. Branagh seems to really enjoy himself in the role. The film is from his point of view, so he is our connection to the story and that connection will leave you totally fulfilled as you leave the theatre.

Is it okay for your kids?

Well it is about murder, but the 1934 setting does create an atmosphere of refined speech. There are a few religious profanities. One unsavory element of that era is the racism that exists and some off-color remarks are made. These are done in a way that demonizes the offender rather than ridicules the victim of the hate speech. (My wife Kristie has a great family discussion guide on hate speech on her blog, Our Kerrazy Adventure.)

There are characters who struggle with alcohol and drug abuse, and these are typically seen as weaknesses and are not glorified. And, of course, there is that murder bit where there are some mildly graphic scenes depicted. We also get some very traumatic reveals about the history of some of the characters. This film would be appropriate for your younger teens and the PG-13 rating is a good fit.

As we learn more about the other characters on the Orient Express, we learn that many have been deeply affected by the trauma of their past. Our "natural man" would seek revenge in a desire to achieve justice, but we must trust in the Judgement of God. It is only through the Atonement of Jesus Christ that we can find truly healing.

If you want to continue the Atonement discussion, you should listen to the Third Hour of Power Podcast episode where we discussed the scripture, “Peace I leave with you, my peace I give unto you: not as the world giveth, give I unto you. Let not your heart be troubled, neither let it be afraid,” (see John 14:27).

Grady Kerr writes for LDS Lifestyle blog, This Mormon Life. There you can find more movie reviews, tips for gospel instructors, and Latter-day culture commentaries. The mission of This Mormon Life’s is to provide articles and videos to help you find joy in the journey.

Grady is a simple man. He likes pretty dark-haired women and breakfast food. Grady lives in the East Valley of Arizona with his wife and 4 kids. Currently he is serving as the Assistant [to the] Scoutmaster in his ward amd lets the Deacons camp in his backyard so they can rack up overnight campouts while he plays video games in the house.