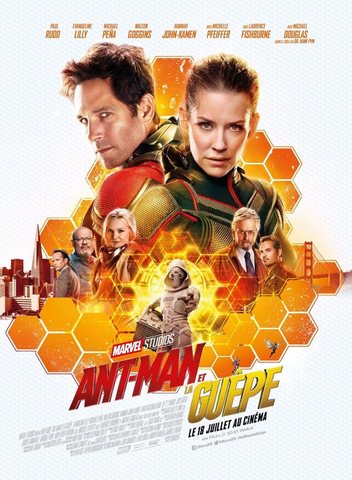 Mormon Moviegoers Review: What Parents Need to Know About "Ant-Man and the Wasp" Before Seeing It with Their Family

Mormon Moviegoers help you make informed decisions by reviewing films for artistry, content, and gospel parallels. It was founded by Jonathan Decker, author of 250 Great Movies for Latter-day Families. For daily reviews join their Facebook group.

Scott Lang finds himself teaming back up with Hope van Dyne and Dr. Hank Pym after the events of Captain America: Civil War in order to find Janet van Dyne and fight a new enemy.

Cleverly written and out-right hilarious, Ant-Man and the Wasp provides a much-needed shot of lightheartedness after the darkness of Infinity War.

It should be noted right away that this movie takes place before the events of Infinity War, and because of this, Ant-Man and the Wasp is allowed to have a lot more fun than it would have been able to if it’d taken place after. This movie provides a welcome alternative to the world-ending perils that we’ve come to expect from superhero films, instead choosing to focus things in on a smaller scale (both literally and figuratively). It admirably creates a more intimate and relatable story by relying on the strength of its characters, rather than the cost of failure.

Paul Rudd and Evangeline Lily reprise their roles as Scott Lang (Ant-Man) and Hope van Dyne (The Wasp), making this the first Marvel movie to have a female superhero’s name in the title. The chemistry between the two leads is as good in this movie as was hinted in Ant-Man, and they both do justice to their very different characters. Both manage to perfectly mix a healthy dose of well-placed and well-timed comedic dialogue into the movie.

If there was a cherry on top of this movie, it would be the return of most of the cast members from the first film (including Michael Douglas, Michael Pena, David Dastmalchian, and Abby Ryder Fortson as Scott Lang’s daughter). While the movie is well titled, some of the best scenes and moments come from the secondary characters (the return of Michael Pena’s voice over-ed montage from the first film is especially great).

Regrettably, we do get another unfortunately forgettable Marvel villain in Hannah John-Kamen’s Ghost, but all in all, Ant-Man and the Wasp is a really well done, mostly lighthearted, summer movie with few flaws.

Is It okay for your kids?

Ant-Man and the Wasp is rated PG-13 for some sci-fi action violence. While these scenes are frequent, they are less intense than those found in other Marvel films such as Infinity War and Civil War. We see some large-scale destruction as well as some close-up hand-to-hand combat, though hardly any blood is shown throughout the movie. Swear words aren’t used a whole lot, but include the s-word, a-word, and the d-word.

Much like the original, this movie’s messages center around forgiving other, redemption for past mistakes, and repentance of those mistakes (see D&C 64:10, Mark 11:26, and Matthew 6:14).

Lindsi currently works for BYU in the Theatre and Media Arts department and is a freelance technical director and stage manager for several theatre companies in the Utah Valley area. In her free time, she loves photography, stand-up paddle-boarding, running 5k’s, reading, spoiling her nieces and nephews, and (you guessed it!) watching movies. For more of Lindsi’s writing visit lindsimichellephotography.blogspot.com.