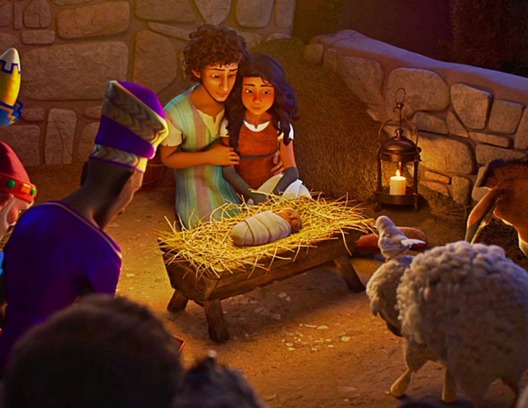 Mormon Moviegoers: What Parents Need to Know About "The Star" Before Seeing It with Their Family

It’s always tricky when a studio takes on a religious story. They can go mainstream and risk alienating faith-based viewers, or they can make the film overtly religious and turn off the more secular fans. This Christmas season, Sony Animation has taken on that challenge with their new movie, The Star. Unfortunately, the film gets caught up in the hijinks of an animal road trip movie, becoming tired and unengaging.

There are some positives about The Star, and perhaps if it had been Direct-to-DVD I might be more forgiving of its flaws in favor of the film’s better qualities.

For example, the scenes of revelation, prayer, and the final nativity scene are handled with reverence and awe. They also cover a full scope of the story from the arrival of Elizabeth and Zachariah to the Wise Men. Also, any scenes involving Mary (Gina Rodriguez) and Joseph (Zachary Levi) were my favorites as they have good chemistry together and were handled in sweet, simple ways. I like both of their characters and how they cared for each other. I wish the movie had been about them to be honest.

The soundtrack is also very strong with traditional carols like “Carol of the Bells,” “What Child is This,” and “O Holy Night” sang by a variety of artists from Mariah Carey to Pentatonix. It’s worth a download of the songs if you enjoy Christmas carols.

The animation isn’t terrible but it’s also nothing to praise. Again, if it was Direct-to-DVD I might be more impressed, but as a feature it needs work. The character designs are generic and the backgrounds lack texture or appeal.

Unfortunately, the movie has many more problems. Instead of focusing on Mary and Joseph, The Star chooses as its protagonist a donkey named Bo (Steven Yeun). This could work, as I have a fondness for the old Rankin/Bass short Nestor the Long-Eared Donkey, but quickly it becomes a generic road trip movie with Bo and his friends, a dove (Keegan-Michael Key) and a sheep (Aidy Bryant), dodging a greedy mill owner who is trying to catch them. I had no interest in these shenanigans; on the occasion of the seemingly 30th market stand toppling over, I was pretty bored.

The humor in The Star was a bit of a problem as well. I rarely laughed and found it more annoying than anything else especially when compared to the lovely softness of the Mary and Joseph scenes. It was like combining Prince of Egypt with Ice Age. In the end, it comes off more annoying and awkward than sincere.

If you can find The Star on a streaming service down the road, it might be worth a watch, but I can’t recommend the film in theaters. The story was routine as it gets, which is a shame when the studio had something special that they could have done with the birth of Christ. Instead they went for boring chases and pratfalls with jokes that fall flat.

As far as content, there’s nothing in here--aside from a little dove twerking--that will offend viewers. The film is PG for some tense scenes involving the greedy mill owner who wants Bo back. However, I would feel more than confident in taking my family members of all ages as far as content goes. In fact, I bet the younger kids will enjoy the movie more than adults because they will probably respond more positively to the humor and animal characters.

Either way, it wasn’t for me and it isn’t worth your big dollars at the box office. ★★

Rachel has loved animation since she was a little girl, singing songs from The Little Mermaid at the top of her lungs. She currently works in social media marketing and loves to blog and vlog about Disney, Pixar, and all kinds of movies in her free time. Her favorite movie is Up and she considers herself quite the Cinderella aficionado, seeing every version she can get her hands on. She also loves animated TV shows like The Simpsons, Gravity Falls, Star Wars: Rebels, and more. For more reviews follow her on twitter @smilingldsgirl and on YouTube.