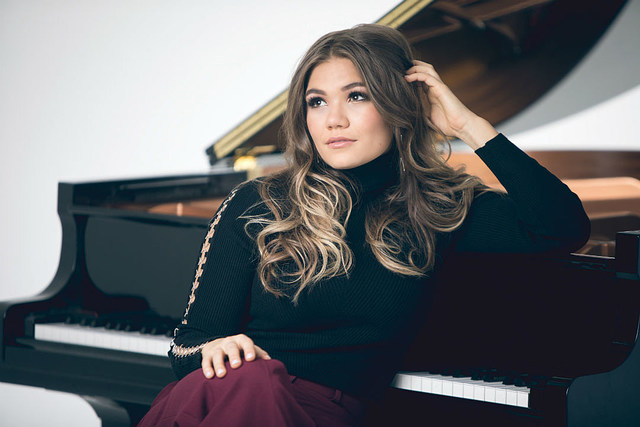 Mormon Named CMT’s “Next Women of Country” Shares Her Faith, Gets Praised by Marie Osmond: "She Flat Out Inspires Me"

Named one of Country Music Television’s “Next Women of Country” for 2018 and listed among the “2018 Artists to Watch,” 20-year-old country singer Abby Anderson is not only a rising country star, she is also an active believer in Christ and in the LDS faith.

Anderson recently released her debut single, “Make Him Wait,” and shared with us her faith and family life.

►You’ll also like: How Gladys Knight Became a Mormon

Anderson has always known that she wanted to be a performer. From a very young age, Anderson enjoyed being the center of attention. The only problem was she did not enjoy practicing piano. However, things changed when a friend came to visit and Anderson insisted on performing for her. After six songs, Anderson knew she had found her future career.

Anderson describes her family as “pure joy.” “We were your solid, always 20 minutes late family of seven kids, taking the sacrament in the foyer, making a scene walking in the chapel, sitting on the fifth row.” Being raised in an active LDS family, Anderson says her parents created an open and supportive environment. She recalled one night when she was home past curfew and her dad was waiting up for her. They later sat on the kitchen floor and talked about dating and boys for an hour. “No secrets” was a rule in the Anderson home.

Another rule is that you have to do everything with a positive attitude. “Happy to do it” is a phrase that Anderson’s dad uses regularly. “Any and every time we were asked to do something, we had to snap our fingers and say, ‘Happy to do it!’ Oh, my goodness, I hated it, but it taught us to have a good and positive attitude about everything,” Anderson says. “Sure, annoying things are going to happen to you, and you're going to be asked to take the garbage out even when it's not your day, but you do it anyways, and you do it with a smile on your face.”

Anderson grew up in what she called a “perfect” family and had a “perfect” life. However, she said she was very passive about her faith for a long time, until her parents split when she was 18 and living in Nashville. “I hit rock bottom. My foundation, my family, just crumbled right under my feet. And to really put a cherry on top, I got my heart broken by the guy I was dating at the time. I felt like I lost everything.” Anderson said it was the darkest time of her life, but also the best thing that has ever happened to her. As she started questioning everything her parents taught her, she also started studying and learning about different religions. She went to every church in Nashville and “wrestled with God” on the hard questions she had.

“Through all of that, I’ve learned what makes me an ‘active believer’—being active in asking questions, being active in prayer, and building my personal relationship with my Heavenly Father daily. My testimony is work. It’s the thing I work on the most. Am I an active member of the LDS Church? Sure. But most importantly, I am an active follower of Christ. For me, the LDS Church helps me facilitate that relationship,” Anderson says.

Anderson said her faith and singing career are part of the person she is and both bring great joy in her life. She said she thanks God every day for having a sure knowledge of who she is as a child of God, especially “in an industry where it’s probably easier to forget that more than others.”

“I realize that the majority of girls my age don’t have that knowledge and confidence growing up,” Anderson says. In her new debut single, “Make Him Wait,” Anderson wrote a lesson her dad taught her to make guys wait and make them work for the relationship. She hopes this song can help young women her age understand their worth.

Anderson is currently on a radio tour to promote her new single, then she will be touring all summer and fall with Russell Dickerson, Chase Rice, and Brett Eldredge.

Speaking about her future, Abby said there is no final destination. She sets high goals for herself and she will keep working hard to reach as many people as possible. Marie Osmond, who has mentored Anderson for the past couple years, said Anderson is very eager to learn. “I knew the second that I first met Abby that she had that raw gift, that combination of passion and gratitude and a voice that every hit song wishes it had,” Osmond says. “I invited her to my house. We sat around all day at the piano, playing and singing and sharing stories. Abby says I’ve taught her a thing or two. . . .  Well, she just flat out inspires me.”

“I want to be a good steward of this gift God gave me. Life is a journey, and that’s why I love it so much,” Anderson says. “There is always something new to do, a new obstacle to tackle and something new to learn. Even talking about it lights me up. All I know is that I am blessed to have the opportunity to do what I am passionate about. And because of that, I will always keep going.”

►You’ll also like: When David Archuleta Knew the Church Was True + the Prayer That Led Him to Audition for "American Idol"