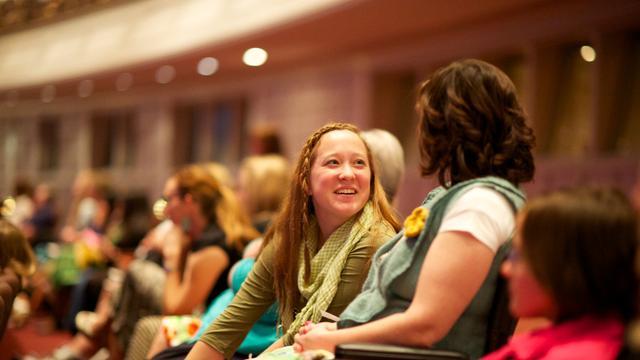 Mormon Radar: Turns Out You Can Identify a Mormon Just by Their Face, Study Shows

We've all experienced that moment when we see someone and just have a gut feeling we've found a fellow Mormon. It could be at Disneyland, on the train, while traveling in obscure corners of the world, or in so many other places.

And on the flipside, we may have been approached by strangers or new acquaintances who ask, "Are you a Mormon?" When I've been in these situations, sometimes there are tell-tale signs, large families or layered clothing, or even dead giveaways, like a BYU shirt or CTR ring, that speak to a person's general membership in Mormondom.

But at other times, I am left asking, "What gave it away? How did they know?"

Dan Miller on Religion News Service calls this sixth sense of identifying fellow Mormons "Modar," short for Mormon radar. While he gives several personal examples from his own life, he also cited a 2010 study that specifically addressed the subject of identifying Mormons based solely on their face.

And it turns out, there are perceived differences between Mormons and non-Mormons that help people identify a Latter-day Saint based only on their face.

The study found that "Mormons and non-Mormons significantly differed in perceived health" and that this difference in perceived health was related to skin quality, color, and texture—which could provide one possible explanation to the common Google query "Why are Mormons so hot."

The study goes on to say, "Perceptions of health were also responsible for differences in perceived spirituality, explaining folk hypotheses that Mormons are distinct because they appear more spiritual than non-Mormons." Mormons talk often about a "light" or "brightness of countenance" that can be seen in those who strive after the light of Christ. Could these rumored differences or that perceived "glow" be attributed to the healthy lifestyles the Word of Wisdom promotes?

While the study is by no means foolproof, it did pay special attention to removing variation in the faces shown that would obviously identify someone as Mormon or non-Mormon (such as multiple piercings). All images were pulled from personal advertisements of Caucasian men or women between 18-30 who were either active members of the Church or members of a different religion.

Read more about the study for yourself or learn more about Modar from Religion News Service.