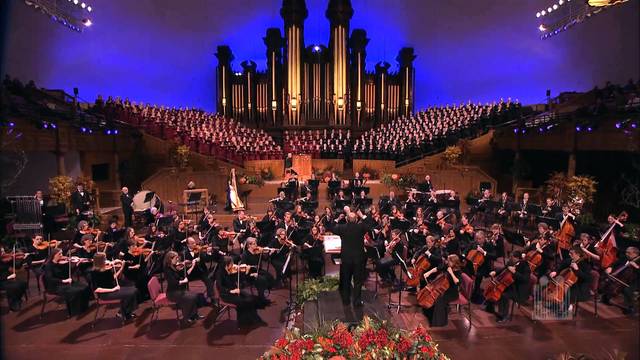 In what has become an Easter tradition, the Mormon Tabernacle Choir and Orchestra at Temple Square will present concerts on Good Friday, April 14, and Saturday, April 15, at 7:30 p.m. in the Salt Lake Tabernacle.

Music director Mack Wilberg will debut his new work called A Cloud of Witnesses which is inspired by accounts of witnesses to the resurrection of Jesus Christ. This work follows the Utah premiere last year of The Prodigal, another work by Wilberg based on the scriptural account of Christ’s parable of the prodigal son. As with The Prodigal, Wilberg’s longtime collaborator, David Warner, provides an original text drawing from scriptural references in the King James Version of the Bible.

The Choir and Orchestra will also perform Ludwig van Beethoven’s beautiful Christ on the Mount of Olives, Op. 85, which was first performed in April 1803 in Vienna, Austria. It was Beethoven’s first major work on a religious subject and his only oratorio. The libretto by Franz Xaver Huber treats the emotional agony of Jesus Christ in the Garden of Gethsemane and His ultimate triumph over death.  The dramatic oratorio features three soloists: a soprano who portrays an angel, a tenor who sings as Jesus, and bass who is the voice of Peter.

Tickets for the concert are free and will be distributed on a first-come, first-served basis beginning Tuesday, March 14, 2017, at 10:00 a.m. Mountain Standard Time. They are also available through lds.org/events or by phone at 801-570-0080. Each patron may request four tickets and admission is open to those 8 years old and older. Patrons without tickets are encouraged to join the standby line by the flagpole on Temple Square for last-minute seating which is often available.