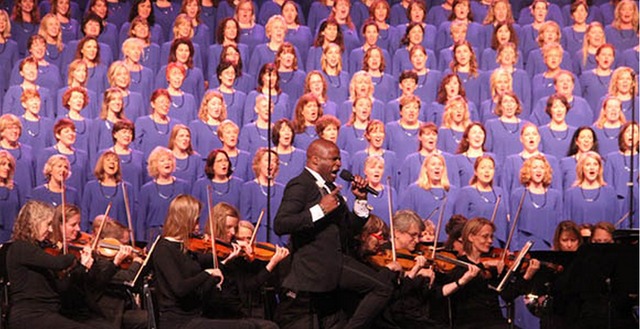 MR says: What an incredible opportunity for the Mormon Tabernacle Choir to add their voices to those who have performed at this legendary site!

About a mile from where the Woodstock Music Festival was staged in 1969, the Mormon Tabernacle Choir and Orchestra at Temple Square performed at the Bethel Woods Center for the Arts June 27. And just as it happened at the iconic ’60s festival, rain dampened but did not wash out the choir and orchestra concert.

A daylong drizzle at the venue, deep in the Catskills about 90 miles from New York City, developed into a downpour by the time the concert began about 7:30 p.m. About a third of the 2,500 or so ticket holders did not attend, ostensibly due to the weather.

On a campus of about 2,000 acres, Bethel Woods encompasses the 37-acre farm field on which an estimated 500,000 young people converged August 15–18, 1969, to hear some of the most popular rock music artists of the day. The hippie culture of the era pervaded the event, and drug use was abundant, but Woodstock has been heralded over the years for the atmosphere of mutual good will and respect and the lack of violence among attendees, remarkable in a group that large encamped for so long.

A museum at Bethel Woods tells the story of Woodstock. Museum director Wade Lawrence said of the Tabernacle Choir and Orchestra at Temple Square appearance, “Woodstock was about expression, and what’s more expressive than a several-hundred-person chorus singing what they feel inside? That’s what music is about; that’s what creativity is about. I couldn’t be happier.”