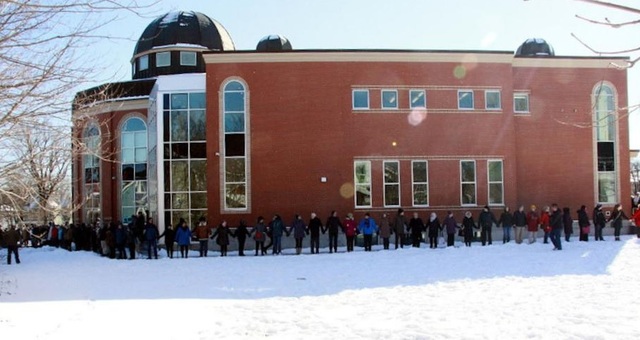 Mormons Join Muslims in Prayer, "Hug" Mosque After Shooting at Mosque in Quebec

Shortly after two gunmen killed six people and injured eight after opening fire at a mosque in Quebec City, Canada, Mormons and other faiths gathered together to show their love and support for their Muslim neighbors.

“Service is the great melding of religious faiths,” said Anna Davison, a Church member who participated in the event. “As we serve our brothers and sisters of any faith or no faith, we grow in love, kindness, empathy and forgiveness, and we create a place where peace and harmony can live and flourish.”

Hundreds of people joined hands to form a “human hug” around the Ummah Mosque in Halifax, Nova Scotia, the first week of February 2017. During the half-hour vigil, participants extended unity, love and protection to their Muslim neighbors, expressing support for the constitutional right to exercise freedom of religion in peace.

Close to 400 members of the community surrounded the building, among them Janet and John MacLennan, co-directors of public affairs for The Church of Jesus Christ of Latter-day Saints in Halifax, together with other members of the Church. “It was a very loving show of support for [the Muslim community] at a sad time,” the MacLennans said.

Prior to the “human hug,” interfaith guests were invited to participate in the Muslim Jummah prayer. The upper room of the mosque was filled to capacity; the message shared being “God is in control.”