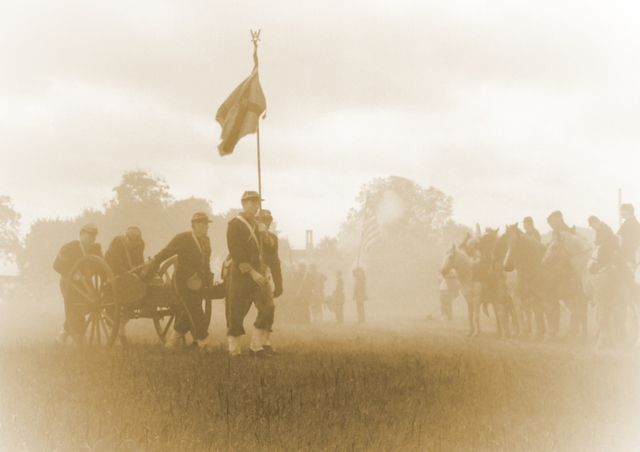 Mormons in the Civil War: Their Own Cavalry + More Fascinating Facts

Known as the bloodiest war in American history, the Civil War affected hundreds of thousands of lives. And even though they were removed from the main body of the United States, the Latter-day Saints living in Utah were not immune from all of its consequences. In fact, the Civil War was the first military conflict in which there were members of the Church on both sides, and the first American conflict in which a Latter-day Saint died from wounds received in battle.

A Prophecy of War

From as early as 1832, inklings of impending war were beginning to trickle into the minds of the members of the Church, largely due to a revelation received by Joseph Smith:

“Verily, thus saith the Lord concerning the wars that will shortly come to pass, beginning at the rebellion of South Carolina, which will eventually terminate in the death and misery of many souls;

“And the time will come that war will be poured out upon all nations, beginning at this place.

The Saints anticipated this altercation between Northern and Southern states. President Brigham Young hoped to be a positive influence of peace, but he also viewed the ongoing fighting as a necessary fulfillment of Joseph’s prophecy.

“Brigham had been there when Joseph ‘predicted that the time would come when slavery in the South, and abolitionism in the North would sever the Union, divide the slave States from the free States, and there would be a great war,’ and he refused to believe that the war would be any different than Joseph’s prophecy predicted. Early in the war, Brigham had hoped that his ‘voice [might] be . . . effectually heard in the strife’ so that he could ‘most cheerfully endeavor to reciprocate the noble deeds’ of Thomas L. Kane during the Utah War and help restore peace to the Union. To his dismay, however, he saw that ‘the roar of canon and the clash of arms drown the still, small voice of prudent counsel,’ making peaceful negotiations almost impossible. A least by 1863, he was convinced that nothing could be done to stop the scourge. Speaking to a group of Saints, he said, ‘[Joseph’s] prediction is being fulfilled, and we cannot help it’” (Kenneth L. Alford, Civil War Saints, pg. 116).

Why Mormons Were Invested in the Civil War

Even though the main body of Saints was removed from the violence, members of the Church were still highly invested in what was going on during the war, partly because of the family and friends they had left behind that were now caught in the conflict.

So certain had Joseph been of the reality and intensity of the coming war that he advised Emmanuel Murphy, an early convert from the South, “to go to South Carolina & Georgia & warn his friends of the wrath & desolation . . . & to gather out his Friends to Zion for the wars & rebellion would begin in South Carolina’” (Kenneth L. Alford, Civil War Saints, pg. 116).

Mormon feelings about the Civil War remained mixed as Latter-day Saints worried about friends and family still caught in the conflict, but many also still harbored ill feelings toward the nation that had so blatantly taken away their Constitutional rights. Despite these diverging opinions, however,

“While other states were seceding to the Confederacy, Utah sought to join the Union and become the thirty-fifth state. Utah’s applications were denied, reinforcing the view that the Civil War was primarily a problem of ‘the states.’ . . . [however] in October 1861, President Brigham Young publicly declared that ‘Utah has not seceded [from the Union], but is firm for the Constitution and laws of our once happy country.’ . . . Because of their hard work, the Saints hoped to be left alone by the United States—a welcome change from the torment and interference they had come to expect at the hands of the federal government" (Kenneth L. Alford, Civil War Saints, pg. 127).

The Call for a Mormon Cavalry

In April 1862, President Lincoln called upon the Saints to help protect the overland trail—particularly the important communication systems spanning across the plains.

In response to this request, President Young immediately called on General Daniel H. Wells of the Utah militia to recruit and equip a cavalry of around 100 men, which he did in just two days with the help of an experienced officer named Lot Smith.

Smith was a veteran of the Indian wars, the Utah War, and a member of the Nauvoo Legion. Interestingly enough, accepting this position actually demoted Smith from Major to Captain. But as someone viewed as a hero in the territory, the Church knew he would fulfill the job well.

Borrowing the needed animals, the group referred to as the Lot Smith Company was quickly assembled and ready to fulfill their duty.

The First Presidency directed the special company to act as missionaries while they performed their duties for their country, to

“establish the influence God has given us . . . be kind, forbearing, and righteous in all your acts and sayings in public and private . . . that we may greet you with pleasure as those who have faithfully performed a work worthy of great praise . . . again prove that noble hearted American citizens can don arms in the defense of right and justice, without descending one hair’s breadth below the high standard of American manhood” (Kenneth L. Alford, Civil War Saints, pg. 132).

As far as their actual military responsibilities, they were primarily in charge of fixing up the roads to aid the mail carriers and other travelers in addition to protecting telegraph lines that were being attacked by Indians, or that could be attacked by the Confederate Army.

Brigham Young left the company with a final set of instructions:

“Another thing I would have you remember is that, although you are United States soldiers you are still members of the Church of Jesus Christ of Latter-day Saints, and while you have sworn allegiance to the constitution and government of our country, and we have vowed to preserve the Union, the best way to accomplish this high purpose is to shun all evil. . . Remember your prayers . . . establish peace with the Indians . . . [and] always give ready obedience to the orders of your commanding officers. If you will do this I promise you, as a servant of the Lord, that not one of you shall fall by the hand of an enemy” (Kenneth L. Alford, Civil War Saints, pg. 134).

Though the job of the Lot Smith Company might not seem very significant, without them communication between the East and West would have been rendered nonexistent. In addition to practical value, however, many saw another, inspired purpose for the company. “Less than two weeks after the Utah volunteers enlisted, President Wells publicly stated that the call of the Lot Smith Company was divinely inspired, and he reaffirmed that the Saints would continue to demonstrate their loyalty to the United States—despite the government’s past interactions with the Saints” (Kenneth L. Alford, Civil War Saints, pg. 132).

Lot Smith and his cavalry made the long journey to Fort Bridger and Independence Rock. Along the way they battled snow, impassable roads, food shortages, Indian problems, and difficult river crossings, but despite it all, one member of the group, a doctor named Harvey C. Hullinger commented that “Only the Latter-day Saints could have surmounted these difficulties and remained cheerful” (Kenneth L. Alford, Civil War Saints, pg. 134). And even though the Mormons were being blamed for a lot of the destruction happening to the United States mail stations, the company of Latter-day Saints fulfilled their military duties along the way, fixing the roads, and at one point even built three bridges in four days.

In their 107 days of service, the Utah company more than proved their worth to the government. General James Craig reportedly told the group that they were “the most efficient troops he had for the present service” (Kenneth L. Alford, Civil War Saints, pg. 135). And though one Private drowned when his horse refused to swim in a swift current and he was whisked downstream, no member of the company died in combat—fulfillment of a promise made to them by Brigham Young.

Though the Lot Smith Cavalry Company was discharged on August 16, 1862, the Civil War raged for another three years. However, “Utah’s only official military contribution during the Civil War provided an opportunity to demonstrate the loyalty of the Latter-day Saints collectively and the members of the Lot Smith Company individually as they faithfully served their country” (Kenneth L. Alford, Civil War Saints, pg. 138). 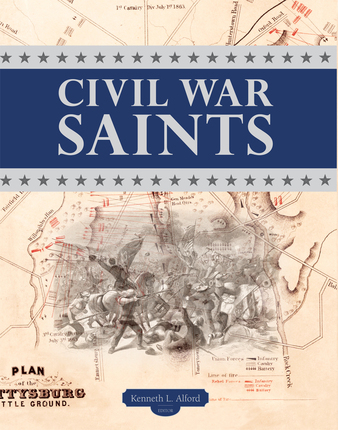 To learn more about the history of the Latter-day Saints and their connection with the Civil War, check out the ebook Civil War Saints, available on deseretbook.com.