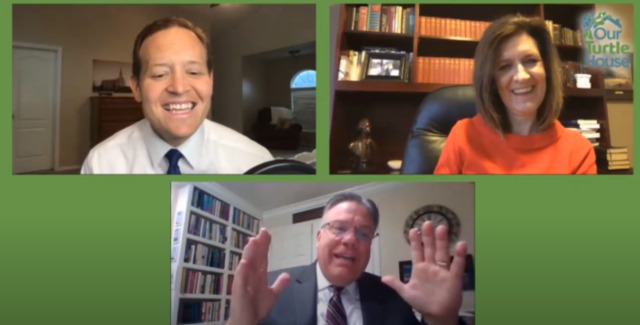 After enjoying thoughts from Brother Brad Wilcox and Sister Michelle Craig on freedom, I almost stopped the digital fireside they were guests on before the Q&A session, but I’m so glad I didn’t. I would have missed an off-the-cuff discussion that taught me things about the feelings of two Church leaders that I never would have known otherwise.

Brother Wilcox and Sister Craig spontaneously shared personal stories that had me wanting to write down nearly every word coming out of their mouths. I’ve narrowed all those words down to four key takeaways:

1. The Lord sees the potential in our circumstances that we do not.

I, like thousands of other Latter-day Saints, am very familiar with Brother Wilcox’s viral BYU devotional, “His Grace Is Sufficient.” Brother Wilcox shared a story behind that talk’s creation that made it even more dear to me. He explained that because the devotional was given in the summer, he assumed only a few people would attend. Brother Wilcox wanted to do something light and fun, but then he felt “very directed” by the Spirit to speak about grace, which he felt was a “heavy subject for a summer devotional.” But he chose to heed the prompting.

“Then I realized . . . I wasn’t speaking to a couple hundred students . . . I ended up speaking to the world. But I didn’t have that in my head when it was happening. I was just trying to follow the prompting I had received to speak about grace,” said Brother Wilcox.

The Lord was able to take a simple summer devotional that Brother Wilcox didn’t think would be of much significance and use it to share a message of hope to the world.

► You may also like: Brad Wilcox: Grace—common ground or battleground?

2. The Lord can comfort us in nerve-wracking moments.

Sister Craig shared about the first time she spoke in general conference in October of 2018. She prefaced her thoughts by explaining that when teaching the Gospel Doctrine class in her home ward, she would get nervous to the point of feeling like she was going to throw up. When it came time to speaking in general conference, some advice from Sister Sheri Dew, who previously served as second counselor in the Relief Society General Presidency, helped Sister Craig find peace.

“Sister Sheri Dew came up to me, and I was a little starstruck—I love Sheri Dew,” said Sister Craig. “And she said to me, ‘I understand you’re speaking tonight,’ and I said, ‘I am.’ And she said, ‘I promise that when you stand at that pulpit you don’t stand alone.’”

Sister Craig said she held on to that advice as her heart beat with nervousness and she wiped sweaty palms on her red chair while waiting for her turn to speak. When she stood up to the pulpit, Sister Dew’s promise proved true: Sister Craig said she felt “surrounded by peace” and like she “really wasn’t alone.”

3. The Lord’s church is not about ladder climbing.

This lesson is one I already knew, but it was solidified when Brother Wilcox shared the story of when he was set apart by President Russell M. Nelson to serve as a counselor in the Young Men General Presidency.

“We went into a conference room by President Nelson’s office, and there was the whole First Presidency right there. And President Nelson said, ‘We can’t hug you. I wish we could hug you . . . but because of these [health] restrictions, we can’t do that. But please feel our love,’ and I felt it,” explained Brother Wilcox.

“One of the things that has impressed me so much since this call came to me just a couple months ago is just this sincerity with which everyone is working,” said Brother Wilcox. “Everyone is working very sincerely to try and make this work move forward.”

4. An empty auditorium at general conference doesn’t mean no one was listening.

“I was able to give a prayer at the Saturday morning session of last conference. And if I’m being perfectly honest, when I walked into the room and it was so empty—the chairs six feet apart . . . I felt kind of sad, like this doesn’t feel like conference. But as soon as it started, it did,” said Sister Craig. “The seats were empty, but that room did not feel empty.”

“I felt like they were speaking to the world, and they certainly were,” he said.

Hear more interesting life stories from Brother Wilcox and Sister Craig and find your own takeaways by watching the full video below.