The new addition to the Joseph Smith Papers, Documents, Volume 5 is full of rich historical treasures that illuminate the life of the prophet Joseph Smith.

And with the inclusion of documents from LDS women, the books shed an even greater light on the life of Joseph Smith through their experiences.

Combining historical documents from October 1835–January 1838, the book covers times of joy for Joseph Smith as the Kirtland Temple was dedicated as well as heartache and division among members and the failure of the Kirtland Safety Society bank.

During this time, eye-witness accounts from women including Eliza R. Snow, Mary Fielding Smith, and Vilate Murray Kimball illuminate gaps in historical records with their letters, particularly the summer of 1837.

"We really had no documents that speak to what Joseph was going through for that entire summer," volume editor Elizabeth A. Kuehn says. "We don't have anything recorded by him or from him, so when you have Mary Fielding Smith saying, 'I had dinner with the prophet and he said this about the bank' or 'he said this about dissenters' I think it helps provide as counterpoints to the records that we have."

In fact, a letter to Emma from Joseph included in the book is particularly striking in its foreboding indication of division in the Church.

"One her [Emma's]  letters is actually kind of our earliest indication that dissent is coming," Kuehn  shares,  "She says, 'I have more faith than some,' kind of painting that there is a lack of faith growing in Kirtland at this time."

Though Kuehn says the voices of women in the early Church included in the new volume are only a fraction of women's experiences at the time, there are more documents from LDS women included in the volume than ever before, adding more information about the life of Joseph Smith that otherwise would not be known. 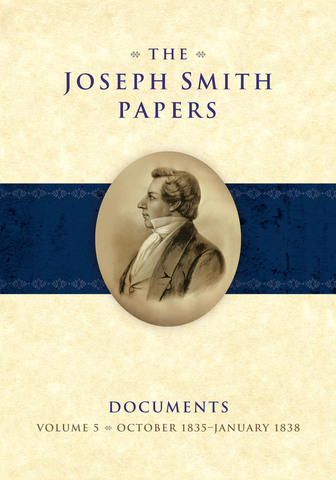 Perhaps no volume of the Joseph Smith Papers conveys the highs and lows of Joseph Smith's life better than Documents, Volume 5. Through letters, revelations, and meeting minutes—as well as more unusual documents such as a map, an essay on abolition, and a study of the Egyptian language—this volume brings to life the consequential and often emotionally charged months from October 1835 to January 1838.