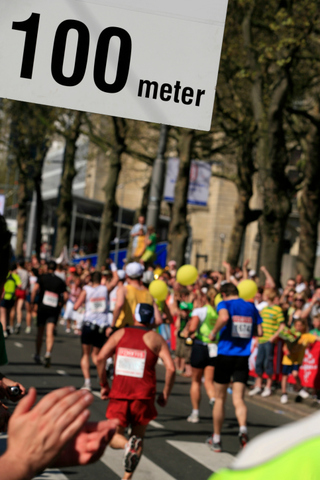 New Testament Lesson 41: "I Have Finished My Course"

Flying over the Sierra Nevada Mountains from a rest stop in California to the airport in Salt Lake City, I opened my missionary  journal and made my final entry:

Now as I finish this work and return home, I pray that I may the Spirit of the Lord and the love of the Gospel with me as I  have in the last two years.

It was clearly presumptuous of me to compare my feelings at the end of two relatively easy years with those of Paul at the end of thirty brutal years, but I remember the feeling of completeness and the sense of satisfaction that I had done a pretty good job.  Some members were stronger than they had been before I met them.  Some missionaries seemed to be better missionaries.  And, most important, some of God’s children had believed the whisperings of the Spirit and my testimony and were joyful, faithful, devoted members of his Church.  It seemed to me that I had fought a good fight.  My mistake was in assuming that the fight consisted of only one round.

It must have seemed to Paul that he had fought a good fight. He had traversed the known world by land and sea for over a quarter of a century; he had established branches of the church in many nations, he had confronted persecution in all of its darkest and bloodiest forms, and he was about the make the ultimate sacrifice of his own life for the sake of the Savior.  He said in the verse before this declaration, “For I am now ready to be offered, and the time of my departure is at hand.” (2 Tim 4:6)

My declaration was premature. Like a child completing fourth grade, I perhaps had a right to a small sense of accomplishment, but certainly not a sense of completion. There were many other courses ahead.

Paul’s letters from Rome to Timothy and Titus outline for us some of the steps we must take in order to be truly prepared to make such a declaration.  Those steps are the focus of this lesson.

[Please Note: If you are teaching youth, you may wish to review President Hinckley’s talk from the April 1997 Priesthood Session of General Conference.  The sermon, entitled “Converts and Young Men” is based almost entirely on the teachings of Paul in the books of 1st and 2nd Timothy. Click here to read it.]

It is one thing to know the Gospel is true.  It is quite another to know the gospel.  Paul’s 1st epistle to Timothy is a testament of the necessity of having that knowledge.  We ought to be like Ammon and his brethren, who had “waxed strong in the knowledge of the truth; for they were men of a sound understanding and they had searched the scriptures diligently, that they might know the word of God.” (Alma 17:2)

If we have  a casual acquaintance with a few well-known passages of scripture many of us are convinced that we are prepared to expound at great length on any gospel topic. But so often that knowledge is based more on here-say than on study and revelation.   I confess that I am a bit of a fanatic about this.  I have a tendency to ask, when I hear unusual and less than orthodox doctrines taught in church, “where can I read about that?”  The most common response is, “One of the brethren taught it in a recent conference.”  Well, maybe, but if you have read any of the talks in recent conferences, you know that the provision of correct citations for scriptures and other quotations is a matter of great importance.  I have driven teachers on my faculty to the edge of insanity by returning copies of quotes and statements and asking that the source be clearly and correctly identified.

The Lord gave Hyrum Smith some wonderful counsel out the need to know doctrine:

Wait a little longer, until you shall have my word, my rock, my church, and my gospel, that you may know of a surety my doctrine. (D&C 11:16)

We all need to know of a surety the doctrine.  Our doctrine must be pure and precise and if it is not, then someone ought to correct us.  Paul wrote:

As I besought thee to abide still at Ephesus, when I went into Macedonia, that thou mightest charge some that they teach no other doctrine,  Neither give heed to fables and endless genealogies, which minister questions, rather than godly edifying which is in faith: so do.  (1 Timothy 1:3,4)

The reason for this injunction might have been written about our own day:

. . . some having swerved have turned aside unto vain jangling;   Desiring to be teachers of the law; understanding neither what they say, nor whereof they affirm.  (1 Tim 1:6,7)

In a later note about this same difficulty, Paul draws a dazzlingly clear picture of the nature of this problem and the kinds of people who are involved with it:

If any man teach otherwise, and consent not to wholesome words,  even the words of our Lord Jesus Christ, and to the doctrine which is according to godliness;   He is proud, knowing nothing, but doting about questions and strifes of words, whereof cometh envy, strife, railings, evil surmisings,   Perverse disputings of men of corrupt minds, and destitute of the truth, supposing that gain is godliness: from such withdraw thyself.  (1 Tim. 6:3-6)

And how is one to go about becoming a saint of sound understanding?   How is one to become the sort of person Paul describes in Colossians? One who is . . .  “Rooted and built up in him, and stablished in the faith . . .”  (Colossians 2:6,7)

Study to shew thyself approved unto God, a workman that needeth not to be ashamed, rightly dividing the word of truth. (2 Tim. 2:15)

For this to happen, we must

shun profane and vain babblings: for they will increase unto more ungodliness. (2 Tim 2:16)

What do you think “vain babblings” sound like in a gospel discussion? How fruitful are gospel discussions in which much time is spent trying to learn the truth about things concerning which the Lord has seen fit to reveal nothing?

There is no profit is discussing things that are not related to the “solemnities of eternity.” (see D&C 43:34)  An undue concern with the rotational speed of Kolob or the heat index for a celestial world are not in the realm of critical religious knowledge.

Paul saw this very problem among us:

Now the Spirit speaketh expressly, that in the latter times some shall depart from the faith, giving heed to seducing spirits, and doctrines of devils; Speaking lies in hypocrisy; having their conscience seared with a hot iron; Forbidding to marry, and commanding to abstain from meats, which God hath created to be received with thanksgiving of them which believe and know the truth.  (1 Tim. 4:1-3)

But refuse profane and old wives' fables, and exercise thyself rather unto godliness.   For bodily exercise profiteth little: but godliness is profitable unto all things, having promise of the life that now is, and of that which is to come. (1 Tim 4:7,8)

All of this brings to mind the following prophetic observation by Elder Packer:

Thus Paul’s list of erratic and apostate behaviors is a  list of the consequences of doctrinal divisiveness.

1 This know also, that in the last days perilous times shall come.

2 For men shall be lovers of their own selves, covetous, boasters, proud, blasphemers, disobedient to parents, unthankful, unholy,

3 Without natural affection, trucebreakers, false accusers, incontinent, fierce, despisers of those that are good,

5 Having a form of godliness, but denying the power thereof: from such turn away.

6 For of this sort are they which creep into houses, and lead captive silly women laden with sins, led away with divers lusts,

Paul ascribes these behaviors to the latter days and prophesies that “evil men and seducers shall wax worse and worse, deceiving and being deceived.” (2 Tim 3:12)

For the time will come when they will not endure sound doctrine; but after their own lusts shall they heap to themselves teachers, having itching ears;  And they shall turn away their ears from the truth, and shall be turned unto fables. (2 Tim. 4:3,4)

The solution is much the same as the one suggested above and  in 2 Tim. 2:15.

But continue thou in the things which thou hast learned and hast been assured of, knowing of whom thou hast learned them;  And that from a child thou hast known the holy scriptures, which are able to make thee wise unto salvation through faith which is in Christ Jesus.(2 Tim. 3:15,16)

Harold B. Lee sounded the warning in this way:

If we are not reading the scriptures daily, our testimonies are growing thinner, our spirituality isn’t increasing in depth. (Seminar for Regional Representatives of the Twelve, Dec. 12, 1970)

And then this wonderful promise:

Take heed unto thyself, and unto the doctrine; continue in them: for in doing this thou shalt both save thyself, and them that hear thee.  (1 Tim. 4:16)

II. BE AN EXAMPLE OF THE BELIEVERS

This verse is worth a volume, but not today.  As you ponder this message, ask yourself which person of all the people you have ever met has had the most significant positive influence on you.  Which scriptural personality would you most like to emulate?  If someone were to pay you a compliment by comparing you to someone, which name linked to yours would you consider most gratifying?

So many times the Savior has invited us to “follow” him.  This is an invitation to make our lives conform to his example.  I have longed at times for the right to say those same words to my struggling children.  At times when I see them trying to change the strait and narrow into the wide and sinuous, I have wanted to take my children by the lapels and say to them, “Follow me.”  If only my example was disciplined enough that in following me they would never go wrong.  But  the example of the Savior was perfect.  He said, “

Of course there is the other kind of example also, and we must avoid it.

O my son, how great iniquity ye brought upon the Zoramites; for when they saw your conduct they would not believe in my words. (Alma 39:11)

We must hold ourselves to a higher standard because of what we understand.  Daniel taught that

We must be wise enough to understand what our example can mean to the lost and the lonely and the sinful.

And they that be wise shall shine as the brightness of the firmament; and they that turn many to righteousness as the stars for ever and ever. (Daniel 12:3)

But thou, O man of God . . . follow after righteousness, godliness, faith, love, patience, meekness.  Fight the good fight of faith, lay hold on eternal life, whereunto thou art also called, and hast professed a good profession before many witnesses. (1 Tim. 6:10,11)

The qualities that enable us to “lay hold on eternal life” are set out like a buffet in Titus.  Here they are:

display a pattern of good works (2:7)

be subject to principalities  (3:1)

be subject to magistrates (3:1)

In his talk in April of 1997, President Hinckley said:

I picture Paul as the old, battered teacher of truth.  He writes to his young friend, in whom he has confidence and for whom he has a great love . . . .

Paul was persecuted and driven; he was hated and despised.  Eventually his life was taken because he fearlessly bore witness of the Redeemer of all men. (C.R., Priesthood Session, April, 1997)

We must be prepared to do likewise.