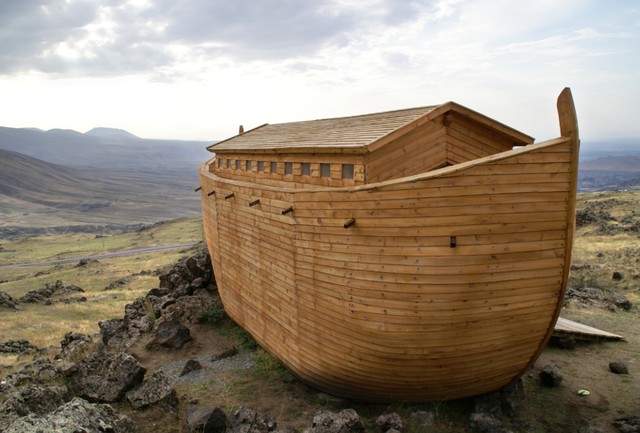 Old Testament Lesson 6: "Noah … Prepared an Ark to the Saving of His House"

How about a little quiz to begin with? True or false?

This is one of the stories (and there a lots of them) that we seem to learn from hearsay rather than personal study. I’ll give you answers at the conclusion of the lesson.

What happened in the days of Noah is clearly described in the following quote:

“There comes a time when the general defilement of a society becomes so great that the rising generation is put under undue pressure and cannot be said to have a fair choice between the way of light and the way of darkness. When such a point is reached the cup of iniquity is full, and the established order that has passed the point of no return and neither can nor will change its ways must be removed physically and forcibly if necessary from the earth, whether by war, plague, famine, or upheavals of nature” (Mormon 2:13-15) (Collected Works of Hugh Nibley, Vol.6, Part.5, Ch.11, p.140).

Note: the lesson today will follow an outline a bit different from the one in the Gospel Doctrine Teacher’s Manual. My intent is to show you some things— some applications—you might have missed on your last reading of Moses and Genesis. But this is not the lesson to teach. If you are an instructor, use the Teacher’s Manual and the scriptures and put this material underneath (far underneath) both of them.

1. How did God feel about the wickedness on the earth, and what did he do about it?

As the wickedness of men began to increase in the earth (see Moses 5:55; 6:15), the Lord did what he always does: he called prophets and missionaries to declare repentance.

“And the Lord said unto me: Go to this people, and say unto them—Repent, lest I come out and smite them with a curse, and they die” (Moses 7:10).

Enoch defended his people with such power, and the Lord acted with such miraculous demonstrations of power that the wicked were terrified.

Those who repented following the translation of Zion (the City of Enoch) were also translated, freeing them from the effects of indiscriminate iniquity.

“And Enoch beheld angels descending out of heaven, bearing testimony of the Father and Son; and the Holy Ghost fell on many, and they were caught up by the powers of heaven into Zion”  (Moses 7:27).

God wept when he beheld the wickedness of men on the earth:

“And it came to pass that the God of heaven looked upon the residue of the people, and he wept; and Enoch bore record of it, saying: How is it that the heavens weep, and shed forth their tears as the rain upon the mountains? And Enoch said unto the Lord: How is it that thou canst weep, seeing thou art holy, and from all eternity to all eternity?”  (Moses 7:28, 29).

The language of Moses 8:17 suggests that even in the midst of rampant wickedness, the Spirit continued to labor with men and women.

“And the Lord said unto Noah: My Spirit shall not always strive with man, for he shall know that all flesh shall die; yet his days shall be an hundred and twenty years; and if men do not repent, I will send in the floods upon them”  (Moses 8:17).

Noah was the final witness and preached for 120 years (see Moses 8:17). This seems to have been a time when nobody was repenting. If they were, they must have been caught up to the city of Zion, but the record is silent regarding this matter during the peaching of the Prophet Noah.

“And the Lord ordained Noah after his own order, and commanded him that he should go forth and declare his Gospel unto the children of men, even as it was given unto Enoch . . . And it came to pass that Noah continued his preaching unto the people, saying: Hearken, and give heed unto my words; Believe and repent of your sins and be baptized in the name of Jesus Christ, the Son of God, even as our fathers, and ye shall receive the Holy Ghost, that ye may have all things made manifest; and if ye do not this, the floods will come in upon you; nevertheless they hearkened not” (Moses 8:19, 23-24).

It appears that the Lord tried a lesser catastrophe, perhaps in an effort to encourage repentance before utter destruction became necessary. You probably remember that in Helaman 11, in the midst of a great war of destruction, Nephi prayed for a famine, hoping that the people might be induced to repent.

In the days of Methuselah, Noah’s grandfather, a similar thing happened.

This catastrophe in the book of Moss did not seem effective in curtailing the rising tide of wickedness on the planet.

He endowed Enoch with sufficient power to protect them from their enemies.

“And so great was the faith of Enoch that he led the people of God, and their enemies came to battle against them; and he spake the word of the Lord, and the earth trembled, and the mountains fled, even according to his command; and the rivers of water were turned out of their course; and the roar of the lions was heard out of the wilderness; and all nations feared greatly, so powerful was the word of Enoch, and so great was the power of the language which God had given him” (Moses 7:13).

He came and dwelt with his people.

“And from that time forth there were wars and bloodshed among them; but the Lord came and dwelt with his people, and they dwelt in righteousness” (Moses 7:16).

The glory of the Lord was upon his people.

“The fear of the Lord was upon all nations, so great was the glory of the Lord, which was upon his people. And the Lord blessed the land, and they were blessed upon the mountains, and upon the high places, and did flourish” (Moses 7:17).

He allowed them to become a Zion Society.

“And the Lord called his people ZION, because they were of one heart and one mind, and dwelt in righteousness; and there was no poor among them” (Moses 7:18).

He took them away from the wicked world.

“And it came to pass that the Lord showed unto Enoch all the inhabitants of the earth; and he beheld, and lo, Zion, in process of time, was taken up into heaven. And the Lord said unto Enoch: Behold mine abode forever” (Moses 7:21).

After all earlier attempts to bring men to repentance had failed and the righteous had been removed to a place of safety, the Lord determined to cleanse the earth by water. The scriptures suggest eight things that were happening on the earth, and one that was happening in the premortal world, that led to this cataclysm.

I can understand this. If I had been there (and I was) awaiting birth, I would have complained bitterly (if such a thing were possible in that place) about the prospect of being sent into a world without a single source of divine light, a world where everyone was only evil continually, a place filled with violence, a place where everything and everybody was corrupt, a place that was completely veiled with darkness.

Now for the answers to the quiz. We have been talking about the lessons regarding the flood in the Book of Moses.  The quiz questions all come from Genesis and the actual account of the deluge.

Why make them tight? Years ago I spoke at a youth conference in Oregon. During a break, the teenagers gathered in the cultural hall and played Red Rover. One side would link arms and then cry, “Red Rover! Red Rover! Send Danny (or someone else) right over!”

Then Danny would run at full speed to the spot he thought weakest in the linkage of arms and try to break through. But if they were holding tightly enough, he would be held back and kept out. We must hold on to the word of God, to our prayers and scripture study and our covenants and our obedience that tightly, tightly enough to repel every effort of Lucifer to break through and interrupt our joy.

“And it came to pass that when they were buried in the deep there was no water that could hurt them, their vessels being tight like unto a dish, and also they were tight like unto the ark of Noah; therefore when they were encompassed about by many waters they did cry unto the Lord, and he did bring them forth again upon the top of the waters” (Ether 6:7).