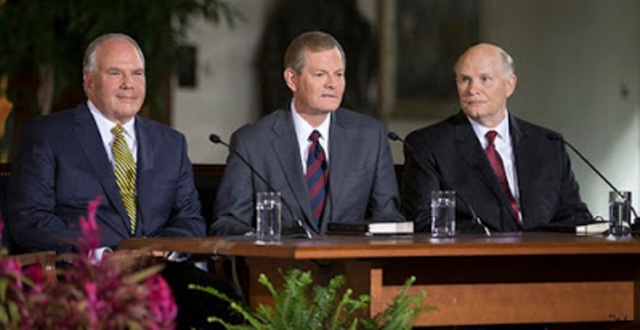 Our 3 New Apostles & Why I'm Glad "Experts" Got It Wrong

MR says: I love this quote which captures the subject so perfectly, "[God] is not ruled by man’s fickle opinions or desires, nor is He swayed by our supposed wisdom. Rather, the Lord calls precisely whom He needs to lead His children at any given time."

Just a few weeks ago, three new apostles were called to fill vacancies in the Quorum of the Twelve Apostles, the second-highest governing body of The Church of Jesus Christ of Latter-day Saints. In the weeks and months leading up to that momentous event, I noticed several news sites, blogs, and other media outlets published articles speculating about who would be called.

Looking at those articles now, it is interesting to see the difference between their predictions and who was actually called. That contrast has given me reason to reflect recently on the “mysteries of God” and the process by which He calls His servants.

What did scholars predict?

Not surprisingly, religious scholars and other experts seemed to largely base their predictions on the backgrounds of “candidates” and what they could mean for or communicate to members of the church and the rest of the world.

Following the passing of Elder L. Tom Perry, which opened the first vacancy in the Twelve, one source listed 13 potential replacements, citing things like educational background, work experience, being in the “right age range,” and their “[appeal] to the Church membership” as characteristics that increased their chances of being called.