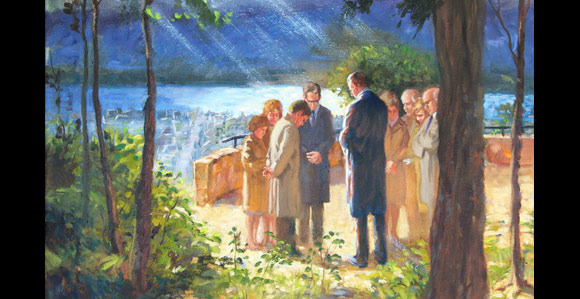 Björn Bauerfeind has vivid memories of being a Latter-day Saint in East Germany, where his “faithful parents far behind the Iron Curtain” were serious about serving the Lord in an area where government officials closely watched the Church. Every Sunday, his parents, Dieter and Ilse Bauerfeind, took him, his sister, and two brothers to attend church, about 40 miles (64km) from their home in Stendal.

“The Rathenow Branch consisted of 10 Church members, including our family,” said Brother Bauerfeind. “Branch President Ferenz, a 91-year-old man, never missed a single meeting either. Contact with other Church members was very limited due to long distances to other Church units. As a little child, sometimes the thought, ‘What a lonely bunch of Mormons,’ crossed my mind. What I did not realize back then was how many blessings the Lord had in store for us for the future. We would live to see many of the promises made by servants of the Lord become reality.