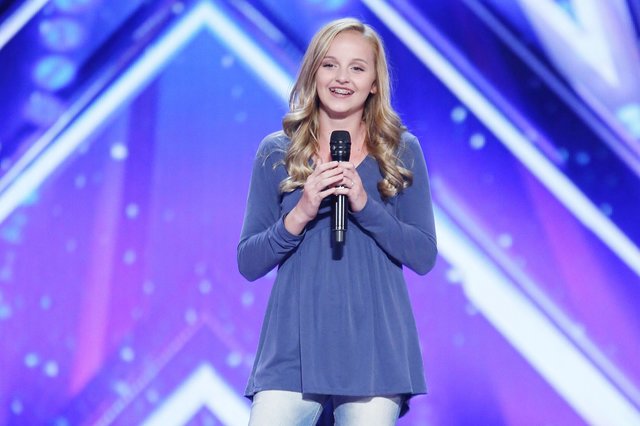 In "Parade" LDS Teen on "America's Got Talent" Shares Testimony, How She Would Use the $1 Mill Prize

What a touching way this young Latter-day Saint has been able to share her testimony with the world: "We know that is all part of a bigger plan and everything is going to be all right.”

Thirteen-year-old Evie Clair initially auditioned for America’s Got Talent to make her parents proud, especially her father Amos Ablanalp, who is battling stage four colon cancer and was given a 5 percent chance to live.

For her audition for judges Simon Cowell, Heidi Klum, Mel B and Howie Mandel, the Florence, Arizona native belted out Christina Perri’s 2011 song “Arms,” the ballad she sings to her father when he is feeling bad. Needless to say, her performance got four yeses.

In the Judge Cuts rounds, Evie made the cut based on her performance of “I Try” by Macy Gray.

Then for her third performance, and the first one on the Live Shows, Evie sang Birdy’s “Wings,” which was a tribute for her parents who were celebrating their 20th anniversary that same day, but sadly, her father was watching her from his hospital bed.

“We were really hoping my dad was able to make it out of the hospital to be here,” Evie told Parade on the red carpet. “He’s been in the hospital all week. We were hoping he would get released so he could come and spend the day with my mom, but things just didn’t work out. We know that is all part of a bigger plan and everything is going to be all right.”

Read the rest of this story at parade.com